The wheat market has pushed to its highest price levels since July on short covering triggered by escalating tensions in the Russia-Ukraine war, but U.S winter wheat planting weather will likely be another factor on wheat prices.  Winter wheat planting will be starting soon across the western U.S. and ongoing dry weather will still be a major concern to those producers.  As reported on last week’s drought monitor maps, 57% of winter wheat acres are experiencing some form of drought, and 46% of those acres are experiencing some form of severe or greater drought conditions.  The top wheat producing state of Kansas is currently affected by drought in 88% of its wheat acres.  The impact of dry soil conditions will likely have an impact of acres, growth rate after germination, and possible abandonment of acres if the weather doesn’t improve.  This factor will likely keep some support under wheat prices in general. 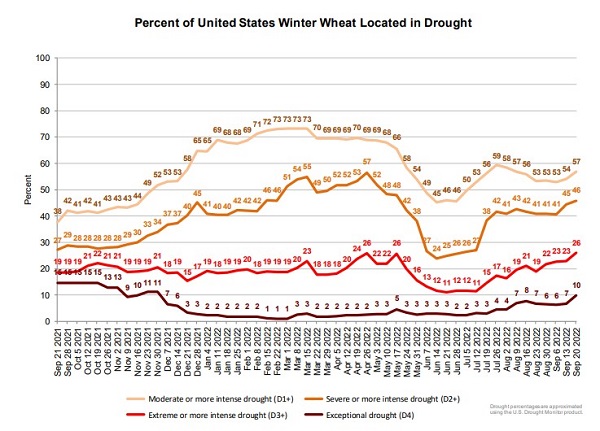 CORN HIGHLIGHTS: Corn futures edged higher, closing 2-3/4 firmer in December at 6.88-1/4 and 3 firmer in March, which ended the session at 6.93-1/4. Firmer wheat prices and a lack of farmer selling were supportive factors today, despite a poor export figure today. As expected, the Federal Reserve raised interest rates by .75 based points. This was widely anticipated, so likely had little impact on today’s trade. Slowing ethanol production last week was viewed as negative, but expected as some plants shut down for maintenance prior to harvest.

Export sales at 7.2 mb were disappointing, yet likely reflect end users’ reluctance to chase high prices on the eve of harvest. Year-to-date sales are 491.5 mb, down from 982.1 for this same time a year ago, also reflecting a more passive buying practice just in time purchases. This too may reflect countries turning to Brazil’s record export supply. According to the International Grain Council’s website, U.S. corn at the Gulf of New Orleans is priced above both Brazil and Argentina corn. With new highs scored again in the dollar, expect exports to remain slow in the weeks ahead. Creeping up is the Quarterly Stocks report due for release on September 29, which is expected to confirm tight supplies into the harvest season. With basis levels as strong as they have been this summer, it does make one wonder if inventory could be smaller than most expect.

SOYBEAN HIGHLIGHTS: Soybean futures closed lower today as the rising US dollar, disappointing sales from last week, and cheaper soybeans elsewhere put pressure on prices. The renewed possibility of a rail strike is another bearish input for beans with demand so strong. Nov soybeans lost 4-1/4 cents to end the session at 14.57, and Jan lost 3-3/4 to 14.63-1/4.

Soybeans have benefited from plenty of bullish fundamentals, such as tight supplies and strong demand, both domestic and foreign, but prices were under pressure today following the release of export sales numbers. Export sales commitments were strong for 22/23 and were up 11% from a year ago, but last week’s sales were disappointing at 16.4 mb sold, and the primary destinations were to Egypt, China, and Mexico. In the US, crush margins are climbing with the combined value of meal and oil 2.98 above the cost of soybean futures today, incentivizing processors to be aggressive in buying cash beans. Global demand is strong for soybeans as well, but the huge amount of beans dumped on the market by Argentina has cut into US export business with China picking up the bulk of those purchases. The climbing US dollar has not helped, making US beans the most expensive option. The demand is still there however as Nov soybeans on the Dalian exchange closed up 1.5% today at the equivalent of $20.51 a bushel, with Chinese demand growing as more cities have their lockdown restrictions lifted. Crude oil was higher today supporting bean oil, while meal pulled back after scoring new contract highs yesterday. Typically, beans would be making lows at this time of year with harvest beginning, but tight supplies and strong demand have kept prices strong. Nov beans closed above their 100-day moving average again today and maintain their upward trend.

It was another day on both sides of neutral, but wheat was able to close moderately higher. The market appears to still be trying to figure out what is happening in the Black Sea region with Putin’s comments that he would use nuclear weapons if necessary. The head of Turkey did state that he would not recognize any of Russia’s referendums and would no longer recognize Russian credit cards at banks. The other issue on the minds of traders is the Fed increasing interest rates again by 75 basis points. With talk that there may be another 125 point increase this year, the thought of recession is on many people’s minds. Another important point of note is an increase to the Russian wheat production estimate. SovEcon raised their projection to 100.0 mmt (compared to the USDA at 91.0 mmt). How much they will actually export remains in question. In other news, the USDA reported an increase of 6.7 mb of wheat export sales for 22/23 and 0.1 mb for 23/34. And while it shouldn’t have a big impact on wheat, the hurricane currently in the Caribbean could hit the US in the beginning of October and could affect other markets.

Money exited the livestock market as the upward momentum has faded in the cattle, triggering long liquidation. Price action was weak on the close and could bring additional selling pressure on the session open on Friday.  The market may be using the strong US dollar and demand concerns as a selling trigger.  In addition, the market could be squaring up positions in anticipation of the Cattle on Feed report on Friday afternoon.  Expectations for the report are looking to show the total cattle on feed at 100%, placements at 98.1 % and marketings at 105.9% compared to last year’s totals.  If realized, the placement number will be the sixth consecutive month lower than the previous year’s estimates. The recent weakness in the market is likely pricing in the negative side of the report. Light to moderate cash trade has developed on Thursday with southern live prices marked at $143, $1 higher than last week’s totals. In the North, business is being marked at mostly $228, also $1 higher than last week.  The market was anticipating a strong cash tone overall this week, disappointing the market. Today’s slaughter totaled 127,000 head, 2,000 above last week, but 11,000 greater than a year ago. Retail values at midday were mixed with choice carcasses trading .03 higher to 249.16, but select lost 1.05 to 225.09. The load count was light at 83 midday loads. The recent weakness in choice beef carcasses is concerning and could be a pressure in the market overall. Weekly export sales were totaling 15,200 MT of new beef sales last week, with China, Thailand, and Vietnam as the top buyers of U.S. beef last week.  The feeder market saw additional technical selling as prices were strongly lower.  October contract may be eyeing support near 177.00.  The Feeder Cash Index gained 165 to 179.75 is trading at a small premium to the Sept feeder contract with expiration right around the corner, could help limit the downside overall. The technical picture looks week, and prices will likely stay under pressure going into the end of the week.  The concerns regarding outside market weakness may also help limit cattle market gains as the cattle market will be preparing for Friday’s Cattle on Feed report.

LEAN HOG HIGHLIGHTS: Lean hog futures saw additional long liquidation as selling pressure across the cattle markets spilled over into the hog markets.  Oct hogs were .300 lower to 94.125, and Dec hogs lost .775 to 85.675.

Hog futures have continued to pullback of recent highs on long liquidation and technical selling, pressured by strong selling in the cattle markets. October and December futures are challenging support at the 100-day moving average, which could be a key swing point in the hog charts. The recent strength in the hog market has come from the hog market anticipating a firmer cash market tone. The Lean Hog Index  has leveled out recently, but traded .40 lower to 97.96.  Oct futures are trading at a 3.835 discount to the index.  Midday direct cash hog trade was softer, losing 1.36 to 93.92, with a 5-day average of 93.42.  Retail values were caught a bid at midday as pork carcasses traded 4.00 higher to 104.35. Today’s midday load count was moderate at 177 loads. Weekly exports sales announced this morning saw new sales of 29,000 mt of U.S. pork last week with Mexico, Canada, and China as the top buyers of U.S. pork last week. USDA release the monthly Cold Storage report on Thursday afternoon.  Frozen pork supplies were up 1% from the previous month and up 17% from last year. Stocks of pork bellies were down 24% from last month, but up 85% from last year.  Pork supplies remain large, building with large slaughter numbers and a softer overall global demand tone.  The cold storage numbers are disappointing and could limit the futures market going into the weekend. The hog market looks to have made the turn higher, but is back challenging some key levels of support.  These need to hold, or charts will turn more negative and be susceptible to additional selling pressure.

DAIRY HIGHLIGHTS: Today saw losses for nearby Class III contracts and two-sided action for its Class IV counterpart. Spot cheese is up 2 cents on the week, closing at $2.0950/lb today, but the spread has widened out even more with barrels now 19 cents above blocks. This is the highest premium for barrels in almost two years and has only been more extreme on two occasions. Barrel demand has been noted as strong in recent regional cheese reports, but it likely means one of the two elements of the spot cheese market is going to “give” soon and shift directions. While butter likely got ahead of its skis on last week’s move to $3.24/lb, it is down just a quarter cent on the week and has helped keep the Class IV market stable so far.