Going back to 2005, the portion of Brazilian soybeans being exported to China has grown steadily to the point that nearly 70% of the soybeans raised in Brazil are exported to China.  This total peaked in 2018 with 82% of soybean sold oversea by Brazil went to China, likely a product of the U.S./China trade war.  Last year, the percent of Chinese exports hit 67% of Brazilian bushel.  The question is, what will be the percentage in 2023?  U.S. soybean supplies are expected to remain tight as projected on the last USDA Crop Production report.  Brazil is forecasted to push a record 150 MMT soybean crop and have ample supplies available for the world market.  Regardless, the soybean market will be counting a large supply of soybeans from Brazil in the next growing season and the quality of that crop will have a direct impact on soybean prices globally. 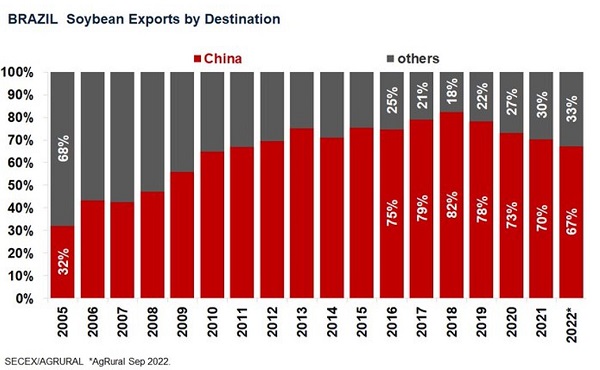 CORN HIGHLIGHTS: Corn futures finished lower following crude oil, soybeans, and wheat. It appeared to be a risk off day in most all markets as futures plunged on growing concern both world economies and the war are headed in the wrong direction. The dollar is screaming higher, establishing new contract highs. Equity prices reached their lowest level for the year. December futures lost 11-1/2, closing at 6.76-3/4.  For the week, December corn traded 1/2 cent lower, but finished near the bottom of the range for the week.

Perception can change in a hurry and the markets will quickly adapt. With a slow export pace and concerns rising that world economies are headed for a recession managed money will decide to either take risk off the table or buy commodities as a hedge against inflation. Producers should probably plan for liquidation. Yet, be strategic if selling. Re-owning with fixed risk paper is an option to consider. If harvest results do suggest yield somewhere near 170, this would suggest tight stocks and little room to error for world production in 2023. To that end, the macro picture, especially with the war likely escalating, looks friendly. Farmer selling is likely to be slow on price dips. Expect basis to strengthen post-harvest.

SOYBEAN HIGHLIGHTS: Soybean futures closed lower today in a move mainly influenced by the rising US Dollar Index, which has been steadily climbing and making US commodities more expensive than other options. Nov soybeans lost 31-1/4 cents to end the session at 14.25-3/4, and Jan lost 31-1/2 to 14.31-3/4.

The entire soy complex and the rest of the grains fell today as risk-off selling beat down the market with the US dollar continuing its climb. Non-commercials were in the driver’s seat selling as concerns about the Fed’s continued rate increases have traders worried about the economy and the possibility of entering a recession. Today’s sell-off also brought crude oil down over 4 dollars a barrel to the lowest prices since the beginning of Russia’s war in Ukraine which added bearish pressure to soy products. On the bullish front, demand for soybean oil is strong and is a solution for reducing diesel prices, and this has caused crush margins to improve incentivizing processors to buy cash beans. While demand domestically has been strong, the continued strength of demand globally is still up in the air and has been slightly slower than anticipated after Argentinian farmers dumped so many beans on the market which China quickly scooped up. Despite this, China will likely need to continue buying US beans as their own countries demand is beginning to pick up with lockdown restrictions being lifted in many cities. January soybeans on the Dalian exchange are near their contract highs and haven’t shown signs of slowing. Although Nov soybeans broke below their 100-day moving average today, the trend is still higher.

The spike in the US Dollar Index which brought it to the highest levels in twenty years spooked traders and created a risk-off environment for the day which affected all commodities including wheat. Non-commercials were not concerned with the tense political environment in Russia and Ukraine that has global wheat supplies at extremely vulnerable levels. Despite spring wheat harvest wrapping up in the US and winter wheat planting beginning, the US is far from record wheat production while Russia is reportedly on track for record production. Estimates from the private firm SovEcon are estimating roughly 3.67 billion bushels out of Russia which will be necessary to feed impoverished countries, but exporting has been difficult because banks, shippers, and insurance companies are not keen to work with them. Russia is attempting to annex parts of Ukraine with sham elections, and has threatened to use nuclear weapons, so global supplies of wheat are in jeopardy. Despite today’s sell-off, wheat has broken out of its sideways trading pattern higher, and the current fundamentals point to higher prices in the long run. Dec Chi wheat has met resistance at the 200-day moving average three days in a row and will need a solid close above it to move higher from a technical standpoint.

CATTLE HIGHLIGHTS: Cattle market were mostly lower, despite some mild support in the front end of the feeder complex as prices pushed lower to challenge support levels before Friday afternoon’s Cattle on Feed report as outside market and increase beef supplies pressured the cattle market.  Oct cattle lost .600 to 144.250 and Dec cattle traded .800 lower to 148.550.  October feeders traded .375 higher to 178.350 with weakness in the deferred feeder cattle market.  For the week, October live cattle lost 1.250 and December live cattle dropped 2.425.  October feeders were 2.900 lower for the week.

The sellers have stayed active in the cattle market this week, as the concerns regarding demand and outside market pressure influenced the market, moving money to the sideline and out of long positions.  This influence will likely stay in the market next week on the same concerns.  Charts closed technically weak and front end futures posted a technical reversal on weekly chart, signaling a possible trend change, despite the fundamentals.  The September Cattle on Feed report was released at the end of the trading session and it showed a still fairly heavy cattle supply.  As of September 1, total cattle on feed was 100% of last year, and in line with expectation.  Cattle on feed totaled 11.3 million head, just slightly above last year’s levels and the second largest September total on record going back to 1996.  Placements were above expectations at 100% of last year.  The analysts were looking toward placement of 98%, but the released numbers were within the expected range. Still, the final numbers were slightly heavy.  Marketings were strong at 106% of last year.  The cattle market has likely priced in these numbers with the recent weakness, but negative tone overall may still outweigh the fundamentals, especially since front end cattle supplies still look plentiful.  In other fundamentals, cash trade occurred in the North at $143 to $147 live and $227 to $232 dressed, which is about $1 to $2 higher than last week’s averages. In the South at $143, $1 firmer than last week on moderate activity.  The market is still looking for support from cash, and that could help overall next week.  Retail values traded softer at midday, with choice carcasses down .11 to 248.29 and select down 1.52 to 220.29 on light demand of 29 loads.  Choice carcasses were trading nearly $4.00 lower than Monday afternoon’s close, adding to the selling pressure on the week.  Feeder cattle were supported slightly by the weak grain markets and the discount to the Cash Index on Friday.  The Feeder Cash Index traded .40 higher to 180.15, showing some end of week strength.  For the week, the index traded 3.33 higher and is at a premium to the front-end futures with September expiration next week. Cattle market is oversold, but the technical picuture and money flow is still concerning.  Cattle on feed didn’t give the market any bullish surprises.  The cash market will try to support, but the influence in the other markets will still be a key piece to the puzzle.

LEAN HOG HIGHLIGHTS: Lean hog futures saw strong selling pressure going into the end of the week as outside market influence, and a heavy cold storage total weighed on hog prices.   Oct hogs were 1.500 lower to 92.625 and Dec hogs lost 2.875 to 82.800. For the week, October hogs dropped 4.275 and December hogs traded 5.175 lower, ending a difficult week.

On Thursday, USDA Cold Storage report stated frozen pork supplies were up 1% from the previous month and up 17% from last year. Stocks of pork bellies were down 24% from last month, but up 85% from last year.  Pork supplies remain large, building with large slaughter numbers and a softer overall global demand tone. The buildup of supplies year over year is concerning to the market in the short term.  As outside markets are under selling pressure from global economic concerns, the concern for consumer demand is very real in the livestock markets going forward. Demand concerns and technical selling have outweighed the improving fundamental number recently.  The cash hog market is trying to find some footing. The Lean Hog Index has leveled out recently and traded .05 higher to 98.01 on the day.  For the week, the index was .24 higher, trading higher for the first time in four weeks.  Oct futures are trading at a 5.835 discount to the index, which should help support prices.  Midday direct cash hog trade was softer, losing -7.71 to 86.21, dampening the hopes of support on Friday. The 5-day average of 93.03.  Retail values were softer at midday as pork carcasses traded 2.30 lower to 101.58. Today’s midday load count was moderate at 210 loads. For the week, pork carcasses were $4-5 softer than Monday’s close. Hog charts are in a difficult spot again as demand concerns and larger than anticipated supplies have triggered strong technical selling and long liquidation.  The negative outside market influence only adds to the market’s concerns.

DAIRY HIGHLIGHTS: Class III milk markets made large moves lower today with October and November futures losing 56 and 57 cents, respectively, while December futures were limit down 75 cents. Due to limit down trading on the December contracts, there will be expanded limits in the dairy markets Monday. For the week, second month October futures lost 59 cents, erasing gains from Monday and Tuesday. A catalyst for the lower Class III prices was the spot cheese trade today where blocks were down 4 cents and barrels down a half cent. Spot cheese was down nominally on the week, but similar to Class III, gains from earlier in the week were lost by the end of trade today. Class IV futures were mixed but mostly down. October contracts gained 3 cents, while November, December, and January were net losers of 3 cents, 33 cents, and 35 cents, respectively. Even with the small gains today, second month Class IV October futures were 36 cents lower on the week. For the week, spot powder was up 2 cents, spot whey down a half cent, and spot butter up 2 cents.