In last Thursday’s report, the USDA cut the projection for the Argentina soybean crop by 8%. The USDA lowered the projected crop by 4 MMT from 49.5 MMT to 45.5 MMT. As the possibility of drought stress has been a focus of the market since the U.S. harvest, the USDA needed to address the reduced crop status. Market analysts still feel there is room for additional cuts in the near future, but the 8% cut exceeded the 6% cut done in the same time window last year, and the USDA worked the Argentina soybean crop down to a final production of 43.9 MMT. The weather concerns have added premium to the soybean market as soybean meal futures and U.S. soybean prices have been supported by the potential lack of supply and global competition for soybeans in general. 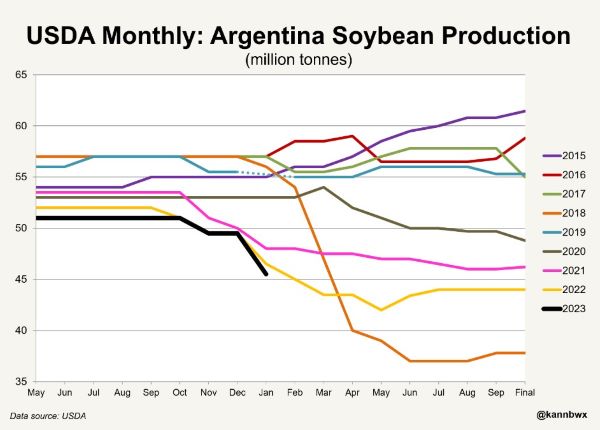 CORN HIGHLIGHTS: Corn futures traded with losses of 5 cents or more on the over-night yet rebounded in sympathy with gains in the soybean and wheat markets and eventually took a life of its own. Futures rallied into the close, gaining 10 cents on March to close at 6.85-1/4. December added 5-1/4 to end the session at 6.03-3/4, its highest finish since January 3. Exports in sections at 30.5 million were not stellar, yet considering how weak some weeks have been, today’s figure was viewed as neutral. Short covering on concerns Argentina’s crop will be short and below beginning of season expectations was also supportive.

Talk of Egypt tending for U.S. corn could be sending a signal that world supplies, especially those from the Black Sea region, could be difficult to come by. While not confirmed, this may be the first ever tender by Egypt for U.S. corn. Last week’s small reduction in U.S. carryout, despite friendly from expectations, have had traders reluctant to go long in front of a three-day weekend. Forecasts into last night were increasing rain chances in drier regions of Argentina and in part may have been why prices began defensively. Yet, coverage is expected to be near 60%. Is this enough when already very dry? Probably not. Fund money was said to be buying as well. A recent decline in equities, negative economic news out of China, and a supportive report last week from the USDA suggest managed money is now seeking commodities with corn part of the mix.

SOYBEAN HIGHLIGHTS: Soybean futures closed higher today along with both meal and bean oil following a flash sale to unknown earlier in the day, precipitation across the Midwest, and drought having damaged Argentina’s crop. Mar soybeans gained 12 cents to end the session at 15.39-3/4, and May gained 10-1/4 cents at 15.37-1/2.

All three soy products closed higher today after opening slightly lower. Argentina received rains over the weekend, and more are expected later this week, but it has gotten a bit late and not quite enough to be of much help at this point. The Rosario Exchange lowered Argentinian soy production by 12 mmt to just 37 mmt, and crop ratings have been lowered further to 7% good-to-excellent from 8%. Southern Brazil is dealing with some dryness as well but overall, the country’s production is expected to be record high and should offset Argentinian losses. The USDA reported a sale of 4.4 mb of soybeans to unknown destinations for 22/23. So far for 22/23, China’s purchases of US soybeans are up 15% from this time a year ago, and March soybeans on the Dalian exchange closed higher today at the equivalent of $19.82 a bushel. Earlier today the USDA said that 76.2 mb of beans were inspected for export last week which was a good amount and put 22/23 inspections within 4% of a year ago. The National Oilseeds Processors Association said that 177.5 mb of soybeans were crushed in December and down 5% from a year ago and less than expected. The trend for March beans remains up but is nearing oversold territory. March soybeans had their highest close since early June.

Overnight weakness completely turned around by the end of today’s session. All three US futures classes posted solid gains and were well off session lows. This comes despite chances of rain for the US southern Plains in the 6-10 day forecast and a lower close in Paris milling wheat futures. This is also in the face of a Russian statistical agency that raised their estimate of Russia’s wheat crop to 104.4 mmt (which is 13 mmt above the USDA’s number). There is still much uncertainty in the Black Sea though. Ukraine’s crop size, domestic use, and exports are all in question. Reportedly, Russia has been intentionally slowing the inspection of Ukrainian vessels with wheat exports out of the Black Sea. China is also a question mark, with economic data coming in lower than expected. Their 2022 GDP growth was only 3% compared to 8.1% in 2021. The grain markets did not seem to care much today, though this could be an anchor down the road. It was also reported that China’s population declined in 2022 for the first time since the 1960’s. In other news, the USDA said that there were 11.8 mb of wheat inspected, bringing the total 22/23 inspections to 456 mb.

CATTLE HIGHLIGHTS: Live cattle and feeder futures finished lower on technical selling and negative money flow, while feeders were pressured by strength in the grain markets. Feb cattle were 0.725 lower to 157.000 and Apr cattle lost 0.800 to 160.100. Jan feeders were 1.600 lower to 179.650.

The market momentum was slipping the last week or so, and Tuesday brought some follow through action to that trade. Prices broke through support levels and traded at their lowest point since mid-December. Long liquidation and technical selling could keep the April contract under pressure as money has been moving out of the cattle market. Possible test lower would include the 100-day moving average at 158.450, or even the 200-day moving average at 156.840 for the April contract. Even with a correction to those levels, the market is still in an uptrend supported by friendly fundamentals. Cash trade was undeveloped to start the week, and the market is hoping for some rebound on the cash market after a steady to lower trade last week. Weekly slaughter hit 661,000 last week, a six-week high in slaughter pace. This was likely influenced by the holiday time frame and the difficult weather across cattle country to end the year. The large slaughter run put some pressure on cash as producers had plenty of availability. Retail values were mixed at midday with Choice carcasses adding 0.42 to 277.85 and Select losing 0.31 to 256.24. The load count was light at 76 midday loads. Feeder cattle were pressured by the overall weakness in the cattle market and technical selling. Corn futures also pushed to a multi-week high, which brought the sellers into the feeder market. The Feeder cash index was .98 lower to 181.05 but is trading at a discount to the futures with expiration for January feeders at the end of the month. This could help limit downside pressure. The cattle market has been losing momentum, and trade to start the week confirmed the weaker tone. Overall, the markets are still in an uptrend, but money may be moving to the sidelines with the lost momentum.

LEAN HOG HIGHLIGHTS: Lean hog futures finished mixed to mostly higher as deferred contracts are trying to put in a bottom. The Feb futures are still struggling against a weak cash market. Feb hogs were 0.200 lower to 78.450, but Apr gained 0.850 to 88.125.

Apr hogs posted a second consecutive daily gain as prices may be looking to forge a low after the strong drop in prices. Price did trade higher but ran into resistance at the $89.00 mark before softening into the close. Prices may need additional follow through to determine in a bottom is in place. Managed money was moving aggressively out of hog futures last week as prices tumbled. Funds exited 27,735 long positions last week, but still hold a long position of 22,735 as of last Tuesday. Money flows were extremely aggressive, but there is still room for more liquidation. Fundamentals were still a concern to start the week. The cash market is weighing on the Feb futures. The lean hog index dropped 1.15 to 74.34 and is still trading at a discount to the futures. Direct cash was soft only losing .01 from Friday to 71.22 and a 5-day average of 71.86, also hold a large discount to the Feb contract. Slaughter runs have stayed heavy with last week totaling 2.688 million head, up 13.6% over the same week last year as packers have plenty of hogs to choose from, leading to weaker cash markets. Retail values were weak, losing 1.03 at midday to 79.56. The load count was moderate at 201 midday loads. The hog market was oversold and may be turning higher on the deferred contracts, but that could be a cautious tone. The fundamental picture is still concerning as the cash market and retail market haven’t made the turn as well. Until the market can find some fundamental support in terms of stronger pork values or improvement in cash prices, the hog market may still be searching for its low.

DAIRY HIGHLIGHTS: As the market began its third shortened holiday week over the last month, the dairy complex posted a quiet and mixed day of trade. Following a close well off the highs last week, the February Class III contract gave up a nickel today with an $18.54 close, while its Class IV counterpart dropped 6 cents to $19.07. The highlight of the day was the second of two Global Dairy Trade auctions for the month in which the index was down just a point from January 3rd. GDT cheese is trading 34 cents above CME spot cheese at $2.21/lb, a reverse of the setup in butter in which the spot market is holding a 40-cent premium to the GDT price. The week is without any other fundamental reports for dairy, but the grain/feed markets garnered some buying following the USDA Supply and Demand report from last Thursday that held some bullish surprises.