Strength in the hog market has been fueled by a strong demand tone and value in the retail product. Pork carcasses in general are trading over the $90.00 level, showing good historical strength, but the higher valued loin primal is eclipsing the $100.00 price point. This is nearly $20.00/cwt over last year’s level. Since the start of 2022, the is pork cut has gained over $7.00/cwt, being a key contributor to the overall value of the pork carcass. The consumer demand and the restaurant trade are the main support underneath the more expensive retail cuts like the loin. Some of the strength for this primal may be tied to lessening concern regarding the Omicron variant of COVID and some regions of the country seeing case counts starting to lower, bring more optimism of a stronger consumer demand. Regardless, strength in the loin cut can help support the hog market, and that has been evident in the first few weeks of 2022. 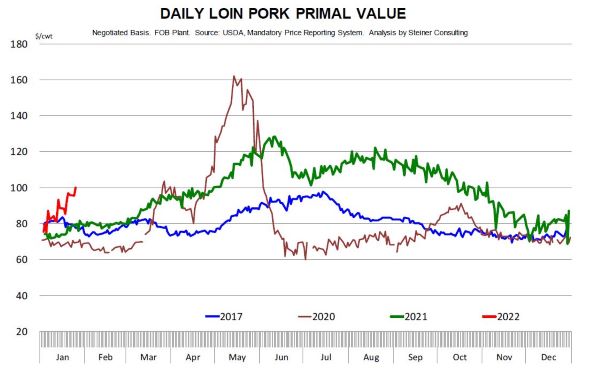 CORN HIGHLIGHTS: Corn futures finished with losses of 1-3/4 to 6 cents. December led today’s drop, closing at 6.66-3/4 posting a bearish-key reversal, not the friendliest signal at the top of a market. New highs for December were posted earlier in the session. March corn suffered a small loss of 1-3/4 cents. The uptrend for old crop remains in place, yet the high from Tuesday has not been exceeded, something to watch in the short run. A sharp run up in the dollar the last two sessions was viewed as potentially negative for corn prices.

Export sales were solid at a marketing year high of 55.2 mb. This brings year-to-date sales to 1.730 bb or 71.3% of the forecasted 2.425bb for sales. With South American weather problematic for Argentine corn and some of Brazil’s first crop, we have to wonder if there will be an increase of sales forecasted. On the January report, the USDA dropped sales by 75 mb. Good basis continues to surface continuing to suggest carry-in was less than forecasted or yield too robust at 177 bu/acre for the 2021 crop. We can see where farmers might be slow to make big sales, yet when prices rally from 5.85 March futures to over 6.25 in two weeks during a window of time when farmers traditionally need to move corn and pay bills it does make us question the total supply. Crude oil and soybean oil continue higher providing support, yet stocks of ethanol as of last four weeks, are on the rise and at their higher on-hand volume at a record at 24.476 million barrels.

SOYBEAN HIGHLIGHTS: Soybean futures reached new contract highs today, factoring in expected production reductions for the southern Hemisphere. Good export sales and technical strength propelled March futures to close at 14.48-1/2 (up 8-1/4) as well as reach a new contract high of 14.56-1/2. November closed at 13.38, up 4-0 cents and a new contract high close. Today’s sales figure at 37.8 mb was solid bring year-to-date sales to 1.622 bb or 79% of total sales forecasted at 2.050 bb.

Some recent strength may also be coming from Ukraine’s relations with China. Ukraine a considered the world’s largest exporter of sunflower seed oil. Sunflower is the fourth largest component to the vegetable oils group. One group recently toured Brazil crop areas and estimated Brazil soybean crop at 124 mmt vs USDA 139, assuming that the weather pattern is changing, and south Brazil should begin to see normal rains. That group estimates that South America soybean crop losses could reach 40 mmt. Nearly daily, we continue to see downgrades in parts of southern Brazil and Argentina. The dry weather has taken its toll and impact is real. Now it’s a matter of trying to figure out if this is going to get worse or if the worst is behind the crops. Prominent forecasters suggest that February looks mostly warm and dry in the same affected regions. The soybean market is reaching into new highs led first by soybean oil and then by the continuous expectation of tighter supplies, especially if exports improve. Yet other analysts continue to argue the USDA has been too robust, and China has not purchased enough to date to meet projected sales.

The USDA reported an increase of 24.9 mb of wheat export sales for 21/22. This is a welcomed increase from recent figures, but it wasn’t enough to push prices higher today. Tensions have eased somewhat along the Ukrainian border causing long liquidation. With that said, the conflict seems to be far from over; the US will not agree to Russia’s mandate that Ukraine be banned from NATO. As we mentioned yesterday, it is unlikely any type of invasion would happen until after the 2022 winter Olympics. Paris milling wheat futures also posted losses today – a bearish point of note are the chart gaps remaining below current levels which may get filled at some point. In terms of weather, snow has fallen in parts of Colorado, Kansas, and the panhandles of Oklahoma and Texas. Some of these areas have been very dry and the moisture is welcomed. Adding to pressure in wheat is the rising US Dollar Index, which is now over the 97 mark.

CATTLE HIGHLIGHTS: Cattle futures saw little to no follow through after yesterday’s gains, finishing the session 22 to 50 cents weaker. Positive news was lacking and a negative reversal in the hog market spilled over to the cattle pit. Lingering effects of lower demand due to covid and economic concerns with expectations of future interest rate hikes and a sharp selloff in the stock market since it peaked in early January are also considered negatives.

Between yesterday and today, prices filled some chart gaps but basically went nowhere fast. Steady to weaker cash and weaker cutouts (choice down 2.92 and select down 3.60) allowed for futures to drift lower. Although less than ideal January weather, fall and early winter weather has been near idea for feedlots (in essence dry conditions) and consequently weights have been on the heavier side as well. Feeder prices have been on the defensive, yet we are looking closely at recommending buys. We don’t believe the near-term, and potentially long-term outlook is lower for feeders. Supply numbers, mainly due to higher feed costs and drought conditions in recent years suggests a downward bias to supply.

LEAN HOG HIGHLIGHTS: Hog futures finished lower today. The recent rally leading to overbought conditions may be catching up and causing a reversal. Feb hogs lost 1.000, closing at 87.025 and April hogs were down 1.775 at 94.675.

Slaughter pace is not fully up to speed, but demand remains strong. Additionally, China was listed as a buyer on today’s export sales report along with Mexico and Canada for a total of 49,100 mt. Prop 12 was also recently suspended by a California court, with enforcement of the law moved back at least six months. This is allowing things to continue as normal for now. Despite these items, selling pressure developed today on what appears to be a technical correction after a strong rally. Hog futures were well into overbought territory and some technical indicators, including stochastics, are showing a turnaround in momentum and potential sell signals. Spillover from lower cattle trade may have also pressured hogs today.

DAIRY HIGHLIGHTS: Class III milk rebounded some today after the recent beating with the February contract closing up 33 cents at $19.84. Spot cheese ended a nine-day losing streak by closing up 0.75 cents, sitting nearly 18 cents off its high from a couple of weeks ago. Spot whey jumped a penny to $0.83/lb. The second month Class III chart is down more than $2.60 since spot cheese put in its peak, as the February contract looks to close out the month back beneath the $20.00 point, but as of now the roll next week would push that chart back over that mark. Whether this is a retracement before a resumption of the upward trend remains to be seen, but futures likely got too much momentum too fast.

Class IV action was mixed with most contracts closing green today. The second month February contract is just short of a dollar off its recent push to all-time highs, coinciding with the recent top put in place for butter prices. After breaking 44.50 cents lower to start the week, spot butter was unchanged today at $2.49/lb. Although the recent rally was certainly overdone, bullish fundamentals remain in place for the butter market so it would not be surprising if prices can find some footing at decent levels. Spot powder strung together its fourth lower close in a row today, something it has not done in almost a year.