Palm prices maintained their climb to record levels. Palm oil futures pushed to new all-time highs this week as the rally for the edible oil looks to be gathering strength. Global demand for this and similar products is already strong due to a tight supply picture, but recently Indonesia has asked exporters to allocate 20% of their shipments for domestic markets, further tightening the global supply picture. Besides its uses for edible oil, the surge in potential usage of these oils in making biodiesel and other biofuels has brought new players into these markets. Soybean oil has also benefited from the price surge, as the March contract has broken out to new highs. Soybean oil will be in strong demand as a replacement edible oil. With production concerns mounting in South America and an acreage battle in the U.S. developing this spring, money flow has been moving quickly into this soybean product. 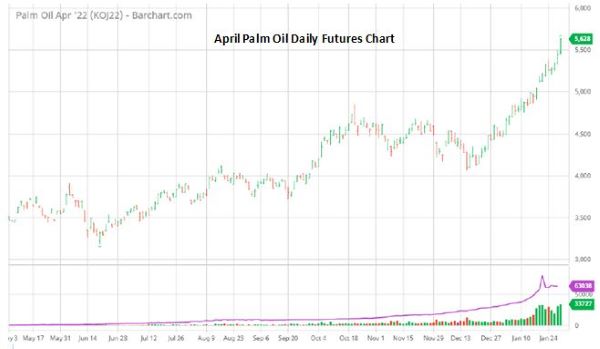 CORN HIGHLIGHTS: Corn futures ended the session near the high of the day, closing 10-3/4 higher in March at 6.36 and 2-3/4 firmer in December. Adverse weather in South America, short covering, inflation concerns (money flow) and good export sales all proved support for prices this week despite gains in the US dollar. For the week, March corn gained 19-3/4 cents and new crop December added 4-1/4 to close at a new weekly contract high of 5.69-1/2.

March corn futures have gained over 50 cents since January 14. Despite being in a technical over-sold condition, futures are brushing off technical signals and instead focusing more on ideas of increased export potential for the U.S. due to smaller crop expectations in Argentina and first crop Brazil corn. Firm energy prices and uncertainty regarding the buildup of tension between Russia and Ukraine are also supporting factors. Some are suggesting that Ukraine will need to ship about 20 mmt of corn by summer. The most recent weather outlooks suggest more of the same for Southern Brazil, which is scattered rain. Lastly the USDA attaché to Argentina cut its production and export forecast by 3 mmt. That potentially could imply an additional 120 mb for the U.S. and a reduction of carryout by the same amount.

SOYBEAN HIGHLIGHTS: Soybean futures continued their blast higher with March gaining 21-3/6 cents to end the session at 14.70-1/2. November added 13-1/2 cents to end the session at 13.51-1/2. Announced daily private sales of near 25 mb by the USDA this morning provided support as did continuing weather forecasts calling for more of the same, which is warmer with scattered rain in southern Brazil for early Feb. For the week, March futures added 55-3/4 cents. Last week’s gain was 44-1/2 cents. November gained 35-1/4 cents after adding 23-2/4 last week.

In Brazil, Safras & Mercado cuts its forecast for exported soybeans from 90 mmt to 85.5 due to dry weather reducing crop size. In early fall, private crop estimates were suggesting near 144 mmt for Brazil soybean production. This month, the USDA estimate was 139 mmt, and private firms have been moving closer to 130 mmt or lower. The futures market is responding. The trend is turning sharply higher, not unusual when a market begins to factor in sudden supply change expectations. Since mid-November, March futures have rallied 2.86 with over 1.00 the last two weeks. We anticipate acreage for US bean will be higher. A month ago, this this would have suggested an increase in carryout to 500 mb. That is not likely any longer. Carry out could stay the same or decrease from the current estimate of 350 mb. The next upside target for March futures is 15.00 and 14.00 for November. Upcoming weather in South America will be as critical as ever for the next several weeks.

Despite the US Dollar index closing at its highest level in a year and a half yesterday, wheat rallied today, dismissing that pressure on the market. Perhaps spillover help from was the reason, as corn and soybeans also had solid gains today. A strong export sales number at 24.9 mb this week may have also helped – that is the highest weekly sale for 21/22. While the tensions have somewhat eased on the Ukrainian border, the situation in that region is far from over with around 100,000 Russian troops remaining there. If Russia does end up invading Ukraine the European wheat market will probably benefit the most (though US exports would be expected to increase too). On a bearish note, the Foreign Agricultural Service raised their estimate of Argentina’s wheat crop to be record large at 21.8 mmt – this is up 1.3 mmt from the January USDA estimate. From a weather standpoint, some of the HRW wheat belt received a decent amount of snow this week in dry areas like Colorado and Kansas. This moisture is welcomed and should benefit the crop, though drought conditions remain a concern going forward.

CATTLE HIGHLIGHTS: Cattle futures saw buying strength to end the week as money flowed into the commodity markets in general. Strong overall retail values and improved demand for cash cattle are bringing some optimism into the market. Feb cattle gained 0.875 to 138.700, while April added 1.475 to 143.100. April Feeders were 0.200 higher on the day to 165.300. For the week, April live cattle gained 1.000, but traded well off the week’s lows. April feeders were 2.825 lower, pressure by strong grain markets.

April cattle look poised to challenge the contract highs with the firm close on Friday but still need more support to break those highs from a couple weeks back. Price could be at a crossroads as the market moves into next week. Retail values stay very support, along with good overall demand. Boxed beef values were higher at midday (Choice: +1.54, and Select: +3.90), reflecting the good demand tone. Retail prices are still historically high, which should help provide some leverage in the cash market next week. Weekly cash trade was done for the week, with only light cleanup trade on Friday. Cash trade at $136-137 caught most business, which was steady with last week. The feeder market was firm on Friday despite a strong move in grain markets higher. The strength in the live cattle market helped lift feeders. Feeder charts look challenged, and next week could bring a technical break if support levels don’t hold. The cattle market overall looks friendly and is still trading in an up-trend. We like the near-term view of the market, as prices may be starting to target a winter/early spring high.

LEAN HOG HIGHLIGHTS: Hog futures saw big swings in prices to end the week before prices finished with gains. A strong cash market and historically strong retail prices help support the hog market. Feb hogs gained 0.900 to 87.925, and April added 0.250 to 94.925. For the week, Feb hogs were 1.725 higher and April was 0.025 softer.

April futures ended the day in consolidation trade but saw nearly a $3.500 trading range on Friday. April contract is starting to look tired technically, and the wide, volatile swings in price may be helping signal that potential top. The direct cash market had a strong day Thursday and saw some of those gain give way at midday on Friday, as morning direct trade was -4.12 to 64.52. The lean hog index had good strength this week, reflecting a more active cash. On Friday the index gained 0.55 to 79.75 and was 2.96 higher on the week. Pork retail values were quiet on Friday, losing 0.15 to 98.04, but trended higher throughout the week. Weekly export sales were supportive on Thursday, and pork product value is historically high, which should motivate packers into the cash market with favorable margins. Deferred contracts have shown strength this week on optimism in the potential tighter supplies of available hogs. Hog futures look to be taking a pause, but prices rejected the lows for the week relatively quickly, signaling the market may still want to work higher.

DAIRY HIGHLIGHTS: After the recent sharp move lower for the nearby Class III milk futures, Thursday and Friday’s trade was friendly with double-digit gains in most contracts. The February contract finished the week at $20.19, down 35 cents overall but up 69 cents from the weekly low, while the soon-to-be second month March price rallied back over $21.00. The block/barrel average was down more than 4 cents on the week but posted a nice 6.25 cent gain on Friday, while spot whey keeps chugging along with a new all-time high of $0.84/lb, up 4 cents this week. Earlier this month, Class III milk finally broke through the $20.00 barrier, while the block/barrel average pushed to 14-month highs with its break above $1.84/lb, and both returned to their old ranges this week after a severe reversal. Spot cheese will likely have to trade back above $1.90/lb to get milk futures to retest the recent highs.

Class IV milk futures also had a strong end to a negative week. February futures were down 88 cents heading into Friday’s trade and managed to halve that with a 41 cent gain today. The second month chart is just 58 cents off its all-time high posted on Monday, representing a much smaller retracement than its Class III counterpart made this week. Spot butter traded a nickel higher to $2.54/lb on Friday but was still down 39.50 cents on the week. That market had gone up too much in too short of time and was due for a correction, but the volatile swings have been something that market has not seen in years. Spot powder continues to hang on at near 8-year highs, closing down just a penny this week at $1.8050/lb. The bullish fundamentals for Class IV and its underlying spot markets remain in place, but it is tough to know if there is enough ammo to sustain a move near $24.00 for an extended period of time.