With this morning’s announcement of Consumer Price Index, core inflations is running at its highest levels in 13 years.  CPI measure the change in the costs of consumer goods and compares that on a year to year basis.  For the month of September, consumer prices rose 0.4% overall, but pushed the year to year comparison to 5.4% higher than last September.  Within those numbers, the largest price increase came in the costs of energy. Those prices spiked higher during the month on global supply/demand concerns.  Food prices showed notable gains for the month, with food at home rising 1.2%.  The impact of higher consumer costs likely weighed on the markets on Tuesday build a risk off type trade for the majority of the day.  The livestock sector could be more cautious, as decreased consumer income from inflationary spending decreases discretionary income, which could cut into beef and pork demand, as the consumer looks for cheaper alternatives. 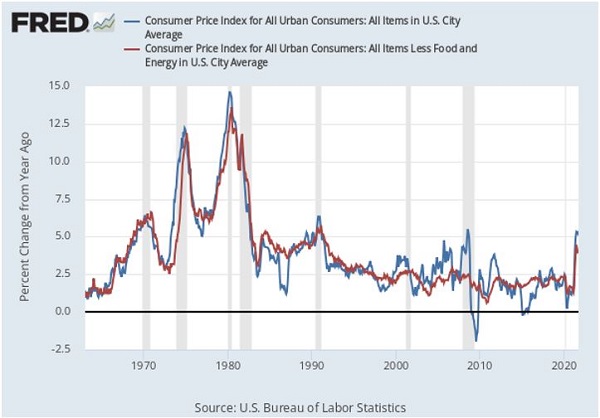 
CORN HIGHLIGHTS: Corn futures closed weaker on follow through from yesterday’s negative WASDE report and expectations for better harvest weather. A broad sell-off by mid-session in corn, soybeans, and wheat suggests that managed money may be reducing long positions.

December futures lost 10-1/4 cents to close at 5.12-1/4. Sharp losses in wheat and soybeans were noted, as well as creating spillover weakness. The USDA Crop Progress report indicated harvest is moving at a fast clip, despite recent wet weather. 41% of this year’s crop is harvested, 10% above the 5-year average. One of the aspects of a negative USDA report during harvest is that it sends a signal to end users that urgency in purchasing is not necessary. It is highly likely the investment community, which has been strongly long corn into the harvest season, looked at yesterday’s numbers and harvest pressure as a combination too strong to overcome and began to reduce long positions. Focus remains on harvest, but also on South American production. Reports continue to circulate outlining challenges Brazilian and Argentine farmers are experiencing securing inputs for production. The key now is to see whether this pullback generates an influx of interest from end users. We feel confident that corn futures near 5.00 will likely create little or no incentive for farmers to sell.

SOYBEAN HIGHLIGHTS: Soybean futures fished with losses of 3 to 7 cents on follow through selling after yesterday’s bearish USDA WASDE report and crop progress figures showing harvest is at 49% complete versus the five-year average of 40%. However, good news in the form of announced sales of 330,000 metric tons to China and 198,000 mt to unknown destinations may be signaling that prices have moved low enough to generate buying interest. These numbers added together are just under 20 million bushels. Not bad for one day.

The challenge for the bean market is the technical picture and perception of big production expectations in South America. While the close today was not all that negative, it still represented a bias toward weaker prices. With carryout well over 300 million and users not likely to be overly aggressive buyers, the overall expectation is for continued weakness. As indicated yesterday, we believe a percentage of farmers were cautious sellers despite high prices this summer as supplies remained critically tight and the market inverted. As the end of August and early September unfolded, expectations for yield began to rise and prices began sliding. As of late we think farmers added additional bushels into the pipeline opting to move soybeans and store corn. Soybean meal finished weaker again except for nearby March which gained 50 cents. Otherwise, the trend remains decisively lower. Soybean oil rebound it today once the energy market went from negative to positive.

WHEAT HIGHLIGHTS: Wheat futures, along with the other grains, finished lower on a risk off day after trading higher early in the session. Additional price pressure may have developed on increased rainfall for the central Plains, helping to alleviate dry conditions. Dec Chicago wheat lost 15-1/4 cents, closing at 7.18-3/4 and July down 14 at 7.26-3/4. Dec KC wheat lost 18 cents, closing at 7.21-3/4 and down 16-3/4 at 7.28.

Most commodity markets seemed to struggle with lower closes, including grains livestock. With double digit losses in both Chi and KC wheat, it is a bit disappointing considering news has been mostly supportive. To recap from yesterday’s data: 60% of winter wheat is planted and the USDA reported wheat inspections at 16 mb. US 21/22 carryout is at 580 mb, down from 615 mb in September. This is the first time in eight years that wheat ending stocks are below 600 mb. World 21/22 ending stocks are also down 6 mmt from September at 277.2 mmt on yesterday’s report. These bullish numbers appear not to have been enough to overcome broad based commodity liquidation. Additionally, from a world outlook, the USDA did lower the Canadian crop but raised exports in the EU, India, and Australia to offset that. The big unknown will still be Russian exports – USDA kept them unchanged at 35 mmt even though Russia may soon implement export restrictions.