Cattle futures have put together a strong rally in the past couple of weeks as strong cash markets and retail demand have brought buying into the market. The length of this rally may be tied to money flow, and open interest in the live cattle market is trading at multi-year lows. After Friday’s close last week, open interest was at 264,310 contracts. This was well below last year’s levels, and in relationship to the 20-year index, trending below those averages. This could mean that there is plenty of money on the sidelines to help support a rally in the cattle markets as money moves into positions. Managed funds have been strong sellers recently as the commitment of traders report by the CFTC showed funds long only 35,000 contracts of live cattle and holding a 10,000 contract short position in Feeder cattle. The combination of small open interest and the managed funds having room to push this market higher could lead to an impressive, prolonged rally as long as the fundamentals support the market. 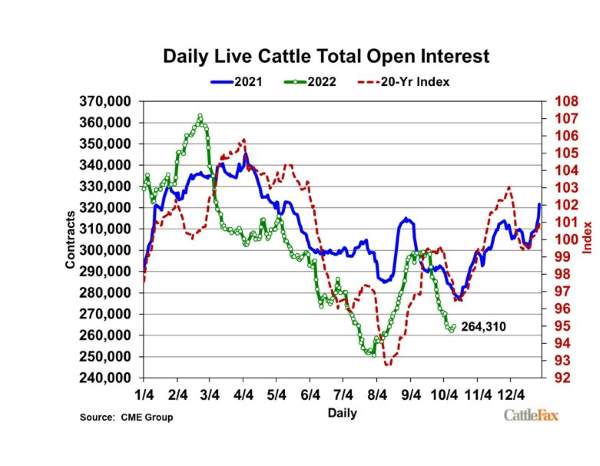 CORN HIGHLIGHTS: Corn futures ended the day quietly with Dec gaining 0-1/4 cents to close at 6.84-1/4. Dec 2023 lost 0-1/2 cents to close at 6.24-1/2. A weaker dollar, steady to firmer energy prices, and lack of farmer selling provided support. For the week, Dec corn futures lost 5-1/2 cents. Last week Dec gained 6-1/2 cents. Bullish traders must be somewhat pleased. The heart of harvest, a high dollar, poor exports, and yet, Dec corn is trading at the same price it was at the end of August. Additionally, Dec corn is trading less than 20 cents off its recent high price of the last 3 months (7.06-1/2).

World supplies remain the issue. High input costs, fertilizer costs and availability, and adverse weather conditions suggest little downside for price. Yet, at the same time, after the Northern Hemisphere harvest, there are no significant weather issues to impact crops in the Southern Hemisphere for weeks or months. For now, the near-term focus will remain on yield results and demand. Despite poor export sales, futures have held up well. This leaves one to conclude price could be much higher if robust sales had occurred or the market is simply overpriced, and it cannot hold up if demand is sliding. Bottom line is that at current prices both bears and bulls have legitimate support for their arguments. If, however, behind on sales recognize that if futures prices drop, it could be quickly and for reasons unknown at this time. Error on the side of rewarding higher prices.

SOYBEAN HIGHLIGHTS: Soybean futures began the day lower but steadily climbed higher to end with a positive close. Regardless of harvest pressure, the strong demand for bean oil and the good export sales this week supported prices. Nov soybeans gained 4 cents to end the session at 13.95-1/2, and Jan gained 4-1/2 at 14.04-1/2. On the week Nov gained 11-3/4 cents.

While harvest pressure has sent soybeans on a slightly downward decline, last week’s and this week’s export sales, which have been mainly going to China, have begun to firm up prices and send things into more of a sideways pattern. The star of the show and the biggest percentage gainer on the week has been bean oil, as demand for bean oil as biofuel has strengthened in the U.S. Bean oil gained 6.20 cents this week and while meal has lagged, all of this has worked to improve already impressive crush margins keeping domestic demand strong. Exports were previously a sore spot and the reason for falling prices a few weeks ago despite the very tight demand, but Thursday’s export sales report showed 85.8 mb of sales last week and 69.7 mb shipped, an impressive number and just what prices had been needing. 66 mb of those sales are due for China who are clearly back in the market for U.S. beans. Water levels on the Mississippi River have not improved and there is very little rain forecast to improve things, but beans have been able to move well out of the PNW and basis has been very good in that region. Dec bean meal gained 6.8 on the week, and Jan beans appear to have put a double bottom in with the next level to reach at the 50-day moving average around 14.20.

Wheat’s close was a mixed bag. On the surface, the daily changes were not that impressive, especially after decent gains at one point. On the other hand, wheat looked much weaker earlier in the day and managed to come back to basically neutral. The market still appears to be at a tipping point in terms of the Ukraine export corridor deal. The situation seems to be somewhat in limbo, with some thinking the deal will be renewed, while others expect a halt on exports. It is worth mentioning that the deadline for a decision is supposedly November 4, and the Russian UN ambassador reportedly feels that the deal will in fact not be renewed. Also worth mentioning is the fact that wheat may have received some support today from the turnaround in the U.S. dollar and the higher stock market. Early on the dollar soared to almost 114, but that strength faded throughout the day; as of this writing, it is around the 112 level and falling. Wheat and the dollar tend to share an inverse relationship, so this shift eased the pressure. There is still also a lot of supportive news out there. For example, the Buenos Aires Grain Exchange lowered their estimate of Argentina’s wheat crop to just 15.2 mmt, whereas the USDA is using 17.5 mmt. Additionally, heavy rains in Australia are continuing to raise questions about the quality of their wheat. There has even been flooding in some areas. And as a final note, some news outlets are reporting that Iranian troops are in Crimea and backing Russia. If true, this could further escalate the conflict beyond what has already been seen.

CATTLE HIGHLIGHTS: The cattle market used technical strength, positive cash tone, and good retail value to push the Dec live cattle futures to a new contract high before the Cattle on Feed report. Oct live cattle gained 0.700 to 150.475, closing with a new contract high for the fifth straight day, and Dec added 0.750 to 152.425 to establish its new high on the close. Feeders mostly followed live cattle higher as Nov feeders traded 0.800 to 178.350. For the week, Dec live cattle gained 4.650, while Feb added 4.425. Nov feeders added 3.575 for the week.

An impressively strong close in the live cattle market,s as prices pushed higher into the USDA Cattle on Feed report this afternoon. The market was expecting the report to show a tighter year-over-year cattle supply, and the report confirmed that expectation. As of October 1, total cattle on feed were at 99% of last year at 11.449 million head, down approximately 100,000 from last year. Placements on the month were 96% of last year at 2.080 million head, and marketings were strong at 104% of last year. Based on the results overall, the report was mostly in line with expectations. In breaking numbers down, the cattle that have been on feed 120 days or more, or heavy weight cattle are expected to be down 0.4% from last year based on placement estimates. This reflects a very tight and current front-month feedlot condition, which has been supportive of cash prices. Cash this week was higher. $147-148 caught most trade in the south and $150-152 reflected trade in the north. This was $3-4 above last week’s totals. This week’s average cash cattle bid will be the highest in nearly seven years. Today’s slaughter totaled 122,000 head, 10,000 greater than both a week and a year ago. Saturday’s kill is estimated at 42,000, bringing the weekly total to 673,000 head, 13,000 more than the prior week, and 11,000 above last year. Beef retail values have had a good week, and at midday, choice carcasses added 0.11 to 253.73 and select was 3.51 higher to 225.59 at midday. The load count was light at 49 loads. Choice carcasses traded over $6.00 higher than last Friday’s close, which will help fuel cash optimism again next week. Cattle on feed numbers were nothing out of the expectation, and the market may have priced a lot of the value in. That could bring a cautious open on Monday, but the fundamentals are still pointing higher going into next week.

Another day, another higher close, as Dec hog futures pushed through trend line resistance overtop the market. Dec has traded higher for the sixth consecutive day, and now seemed poised to challenge the contract high of 91.350 from August 16. The USDA daily data was available today. In the cash market, the national direct morning cash trade was not comparable to yesterday’s non-report, but the 5-day rolling average moved up to 91.34. The CME Lean Hog Cash Index traded 0.56 higher to 93.76. For the week, the index was 1.09 higher and still holds a $4.635 premium to the Dec futures, helping support the front of the market. Retail values have trended mostly sideways to higher this week, and midday carcass trade was 1.26 lower to 102.61 on moderate demand of 204 loads. Estimated hog slaughter this week is at 2.426 million head, down 6,000 from last week, but up 49,000 from last year.  Supplies are still available, but pork carcass weights are trending under last year, keeping pork supplies in line with last year’s levels. This week, hog futures have been trading above the key 100 and 200-day moving averages for the first time since September, reflecting an improved technical picture in the hog market and prices have stretched higher above that key threshold. Prices have had a strong recovery and the chart looks supported on the prospects of demand and an improved technical picture; the trend stays currently higher.

DAIRY HIGHLIGHTS: While the November Class III contract closed the week 63 cents higher within a volatile $1.48 range, the December contract and all 2023 contracts were lower on the week. The Q1 Class III average has fallen about $1.17 in the last two weeks, while the Q2 average fell around 90 cents in that time. Class IV action was similar with the November contract finishing up 26 cents from last Friday’s close, but most deferred months gave up value. The two fundamental reports released this week, Tuesday’s GDT Auction and yesterday’s Milk Production report, were both seen as bearish. Overall, market action has been mostly rangebound in recent weeks for both the nearby dairy and feed markets, with the exception of spot powder’s break down.