Soybean export inspections were finally above average last week as shipments hit 106.1 million bushels for the week ending October 20. This was the fourth largest weekly shipment total on record for U.S. soybeans. China was responsible for 75% of those total shipments. The was an impressive week overall, but the market will need to see a true trend develop in those export inspections. Compared to last year, current U.S. soybean inspections are running nearly 1 MMT behind last year’s pace. Sales on the books are strong; the key will be getting those soybeans out through the ports. Ongoing logistical issues with the water levels on the Mississippi River will likely be a major part of the final soybean inspection totals. 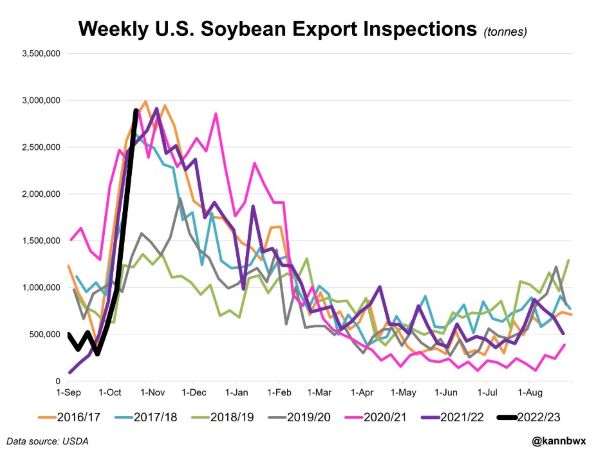 CORN HIGHLIGHTS: Corn futures traded both sides of steady before slipping into the close. December lost 2-3/4 cents to close at 6.81-1/2. December of 2023 gave up 2-0 to end the session at 6.22-1/2. Weaker soybeans, harvest pressure and continued concerns regarding the Mississippi waterways kept prices in check. Slow export inspections were also noted, although with slow sales and transportation issues today’s light figure was of no surprise.

Inspections came in at 18.8 mb, over 20% less than for this same time last year. Remember last year there were also transportation issues due to hurricane damage. One of the contributing factors to low water is a lack of hurricane activity bringing moisture up to the Ohio valley. Add to that a creeping drought from the West which is moving east is concerning as well. Yet, harvest is rapidly moving along. Many producers will be well ahead of schedule due to little or no rain days. Basis levels are fluctuating, mainly supportive due to a lack of farmer selling. We remain of the opinion that since 2019, supplies have been tighter than what is reported. This suggests areas where production is average or below farmers are tucking away the crop, creating an environment where stronger cash is required to encourage farmer selling. Prices continue to trend sidesways, with 7.00 as resistance and support at 6.65 then 6.50.

SOYBEAN HIGHLIGHTS: Soybean futures closed lower today as the re-election of China’s leader was confirmed, and given the tension between China and the US, traders were concerned and adopted a risk-off mentality. The Mississippi River water levels remain a bearish factor and is not expected to be resolved soon. Nov soybeans lost 23-1/2 cents to end the session at 13.72, and Jan lost 23-1/4 at 13.81-1/4.

The soy complex was shaken today after China’s leader, Xi Jinping, secured another term as head of the ruling Communist Party, breaking with tradition and promoting allies who support his vision of a tighter control over the country. Xi has surrounded himself with other Standing Committee Members who are loyal to him and his regime, and this consolidation of power had traders worried today as tensions between the US and China remain very high. Despite the strain, China has been an active buyer of US beans lately, and 106.1 mb of beans were inspected for export last week, the highest amount in several years. Low water levels on the river are still impeding barge traffic but China managed to secure 30 mb out of the Gulf and 50 mb through other ports but mainly the Pacific Northwest. Soybean crush demand has been keeping prices from slipping as crush margins have increased by 68 cents in Illinois to 19.29, incentivizing processors to buy beans. In Brazil, a record crop of 5.58 billion bushels is estimated as planting conditions have been favorable, but any weather issues could lower that number, and Argentina remains extremely dry. Friday’s CFTC report showed non-commercials as buyers of 1,124 soybean contracts, increasing their net long position to 66,862 contracts. Jan beans are trading sideways in a range between 13.65 and 14.20 with a gap lower at 13.57.

All three US classes of wheat along with Paris milling futures closed lower. There has not been much news or progress in terms of the Ukraine export corridor deal. Some feel it will be renewed while others think it will be stopped; the headlines seem to sway on that stance each day. There was talk, however, that Putin is intentionally delaying the departure of vessels from Istanbul. But there is also other geopolitical news in that China’s president, Xi Jinping, was reinstated for another five-year term. This is unprecedented and may have offered some resistance in the soybean market today on concerns about China demand as well as US / China relations. While probably not having a direct impact on wheat, it may impact the commodity markets overall. Here at home, Texas, Oklahoma, and parts of Kansas are receiving beneficial rains, though they will be unlikely to reverse the drought and to the north it remains dry. Even so this may have added to pressure today. Also not helpful were export inspections, with only 4.6 mb of wheat inspected, with the total 22/23 number now at 349 mb. With US wheat still at a premium to other world exporters, these numbers have been lagging lately.

CATTLE HIGHLIGHTS: The cattle market treks higher after the Cattle on Feed report brought no surprise, so the market focus moved back to the technical strength, prospects of strong cash and good retail demand. Oct live cattle gained 1.125 to 151.600, closing with a new contract high for the sixth straight day, and Dec added 1.700 to 154.125 to establish another new high on the close. Feeders mostly followed live cattle higher as Nov feeders traded 0.800 to 179.150.

Cattle on Feed numbers were in line with expectations and confirmed a tighter overall cattle supply, and that seemed to allow the cattle market to push higher. The market was expecting the report to show a tighter year-over-year cattle supply, and the report confirmed that expectation. Cash trade was undeveloped on Monday, typical for the start of the week, but expectations are for cash trade to trend higher week over week. That optimism is supported by a strong tone in the retail market. At midday Monday, Choice carcasses traded 3.69 higher to 257.40 and Select was 3.52 higher to 227.88 on light movement of 41 loads. This was a strong start to the week after Choice carcasses added $7.09 last week on good strength. The strong retail tone allows the packer to keep bids strong for the tightening cash supply. Today’s slaughter totaled 126,000 head which was steady with last week, but 8,000 greater than last year and 10,000 greater than both a week and a year ago. Feeder cattle used the weak grain market and strong live cattle market to add to its gains. Managed money was still holding a short position in the feeder market as of last Tuesday, and the price strength will lead to additional technical and short covering. The feeder cattle cash index gained .68 to 173.62 but is still trading at a discount to the October futures with expiration on the 27th. In the near term, all signs are still pointing higher as the cattle market is trending to new highs or poise to challenge those highs.

Dec has traded higher for the six consecutive days; prices saw some profit taking and consolidated at the top of last week’s gains to start the week. China released GDP data, while at 3.9% growth was better than most analyst thought, but still keep markets tied to China cautious like pork and soybeans. After a strong run higher last week, some caution maybe be better than bad in an over-heated market. Now the market needs the fundamentals to maintain its overall strength. In the cash market, the national direct morning cash trade was not comparable to Friday’s non-report, but weighted average prices traded at 85.88 and the 5-day rolling average moved up to 91.71. The CME Lean Hog Cash Index traded 0.29 higher to 94.05. The cash index still holds a $6.125 premium to the Dec futures, helping support the front of the market. Retail values were firmer at midday with carcasses gaining .72 to 101.66 on moderate demand of 180 loads. Prices have had a strong recovery and the chart looks supported on the prospects of demand and an improved technical picture; the trend stays currently higher, despite the softer, consolidation tone on Monday.

DAIRY HIGHLIGHTS: The biggest mover in the milk market was November Class IV futures which added 21 cents to close at $23.88 while the rest of the complex held small gains. Class III action was mixed with the second month chart closing up 3 cents. Only cheese saw any loads moved in the spot trade today as it fell 1.375 cents to $2.06/lb, and butter gave up a penny to close at $3.19/lb. Today’s October Cold Storage report showed cheese stocks up 1% YoY but down 1% from September, while butter stocks were down 18% from October 2021 and down 4% from the month prior.