Soybean meal has gained value in recent weeks and with today’s trade close to reaching contract highs. China recently has made purchases of soybeans from Argentina. Argentina is the world’s largest exporter of soymeal. The implication is a potential shortfall of meal to be exported from Argentina. That leaves the door open for sales from the U.S. Expectations for a large South American soybean production may temper bullish enthusiasm. However, weather will be critical. Anything less than ideal conditions could lead to a surge in meal as the market may concern itself with rationing of supply. This is done through higher prices. 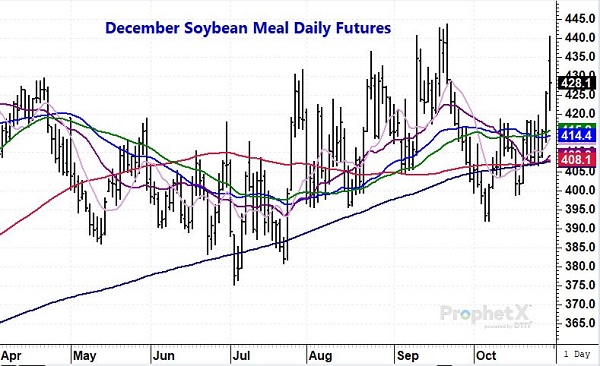 CORN HIGHLIGHTS: Corn futures pushed higher on reports that Russia’s decision to not re-new the export corridor had prices on the offensive. Sharply higher wheat prices and stronger soybeans were also supportive despite a firmer dollar. December gained 10-3/4 cents to end the session at 6.91-1/2 and December 2023 gained 4-3/4 to close at 6.25-3/4. Export inspections at just under 17 mb were not great and reflective of slow weekly export sales.

Today, all attention was focused back on the war in Ukraine. Russia has indicated that they will not honor the brokered agreement for passage through the export corridor after November 19th. That grabbed the wheat market’s attention and had prices trading 60 or more cents higher at the start of the overnight trade. As for corn futures, between poor export inspections and a rebound in the dollar, one would have to argue that corn futures were morally a follower today rather than leader. Yet, as harvest continues and approaches, its final stages expectations remain mostly unchanged and that is farmer selling remains light and will likely only occur if basis improves, price improves, or both. End users are likely recognizing this and consequently, we are beginning to see improved basis levels, in the western regions of the Midwest. Futures are still stuck in a range bound pattern, however, 7.00 is holding as resistance on December futures.

SOYBEAN HIGHLIGHTS: Soybean futures closed impressively higher today, along with both meal, but bean oil was the driving factor behind the gains. News regarding the Black Sea grain deal fueled bean oil to go higher as it would slow exports of sunflower oil. Nov soybeans gained 19-1/4 cents to end the session at 14.07, and Jan gained 19-1/4 at 14.19-1/2.

News over the weekend that Russia moved to pull out of the Black Sea grain deal moved the entire grain complex higher, and although soybeans did not react as positively on the open, the soy complex steadily rallied higher for a close sharply up. If the grain deal is not renewed then sunflower oil will not be able to be exported, and this prospect sent both bean oil and EU rapeseed oil rocketing higher. Crush margins are already record high and this news regarding Ukrainian exports will likely make those margins even more generous. Spot bean oil futures reached their highest levels since mid-June, and cash margins in the East have been as high as 5-6 dollars. Soybean export sales are still higher than a year ago, but total inspections are still lagging last year with last week’s number at 94.6 mb. In Brazil, weather conditions are favorable with rain continued to be forecast for weeks, and expectations are that 45% of their crop will be planted by the end of the week. Last week non-commercials were buyers of 8,549 contracts of soybeans, increasing their net long position to 75,411 contracts, their largest position in a month. Jan beans closed at the top of their recent trading range and the top of their Bollinger Band. Tomorrow will tell if beans can break out of this range.

Over the weekend, a drone reportedly struck Russia’s largest minesweeper in the Black Sea. Russia retaliated by closing the export deal and with more missile strikes in Ukraine. It seems like some vessels are still moving out but with this situation still developing it is difficult to know exactly how it will play out. The market had a quick reaction however, and the wheat market finished sharply higher, especially as the managed funds were short about 39,000 contracts of Chi wheat. It is believed that Ukraine can still move about 3 mmt of grain per month to Europe by rail, but without sea transport their exports are likely to decline sharply at a time when global food security is a concern. In other news, the Fed is expected to raise interest rates another 75 basis points this week, increasing worries about recession. Weather is also on trader’s minds; droughts in the US southern plains as well as Argentina are problematic. On a final note, export inspections were delayed today but came in for wheat at only 5 mb, with total 22/23 inspections now at 354 mb.

Live cattle likely saw some spillover selling from feeders, which lost about a dollar in January and later contracts as grains rallied due to news out of the Black Sea region. Boxed beef was 77 cents higher in choice and 2.58 higher in select, while cash averages ended last week 2 dollars higher in the South at 150 and 5 dollars higher in the North around 240, all bullish signs. Traders may be concerned that this momentum in cash won’t hold throughout this week, but feedlots have been holding firm knowing that the numbers aren’t out there. When cash does trade this week, it is called to be higher, and this along with continued gains in boxed beef is what futures need to continue higher. Last Friday’s Commitment of Traders showed funds as buyers of live cattle by 27,526 contracts leaving them net long 63,552 contracts. Dec live cattle gapped lower on today’s open but recovered most of those losses as the day progressed. We remain near the contract highs but technically are close to exiting overbought territory.

LEAN HOG HIGHLIGHTS: Lean hog futures had a mixed close. Higher corn and soybean prices added, lower cattle, and economic concerns all added to pressure. But the anticipation of tightening supply down the road may have provided support for deferred contracts. Dec hogs lost 1.17 to close at 84.925 and Feb was down 0.400 to 88.450. April contracts onward posted gains with June leading the way, up 1.025 at 105.025.

The big news over the weekend influencing markets is the talk that Russia is shutting down the Ukraine grain export corridor. While not a direct impact to hogs, it did impact grain prices, which likely weighed on nearby futures. There is still much uncertainty as to what will and won’t be shipped and this is causing confusion in the markets. The general sentiment, however, is that grain prices will rise as supply out of the Black Sea is cutoff. The hog charts are also in a period of consolidation. Dec prices have not been able to come back from the strong down day last Thursday. Today’s close on that contract was also just below the 200 day moving average (which was at about 84.975). This could act as an area of support if the market can close above that level tomorrow. There may be resistance at the 10 day moving average around 87.100. Dec and Feb hogs are also at a discount to the hog index at 93.77, and may need to make up some ground to get to that level.

DAIRY HIGHLIGHTS: The biggest mover on the day was spot butter falling 19.50 cents on 4 trades to close at $2.9450/lb. This is the first time that market has closed under $3.00/lb since August 19th and could set the tone for a rough go for the Class IV market as spot butter historically has followed up rallies with severe and quick downtrends. Class IV futures reacted with double digit losses as the November contract dropped 35 cents to $23.30 and the December contract closed at $21.18, down 7 cents from Friday. One could argue the reaction could have been worse and will be watched closely for the remainder of the week. Conversely, the nearby Class III contracts closed with gains as spot cheese finished less than a penny higher. The second month Class III chart has not traded underneath $19.00 in 11 months and the contract roll this week will bring December futures into focus, which closed right at $19.00 today.