As drought has impacted the southern Plains over the past year, concerns regarding the condition of the next winter wheat crop is an issue.  On Monday afternoon, the USDA released the first crop ratings for the 2022-23 winter wheat crop.  Only 28% of the crop was rated good/excellent, the lowest first crop rating on record.  In addition, 35% of the crop was rated poor/very poor, the highest percentage level for that rating on record.  The market was anticipating poor results, being that these values were well off market expectations.  The wheat market added some premium on Monday before the rating due to the new developments in the Russia-Ukraine war, but prices were supported and higher again on Tuesday after the rating.  The dry weather forecast looks to persist, which should build some support under U.S. wheat prices due to potential tight supplies. 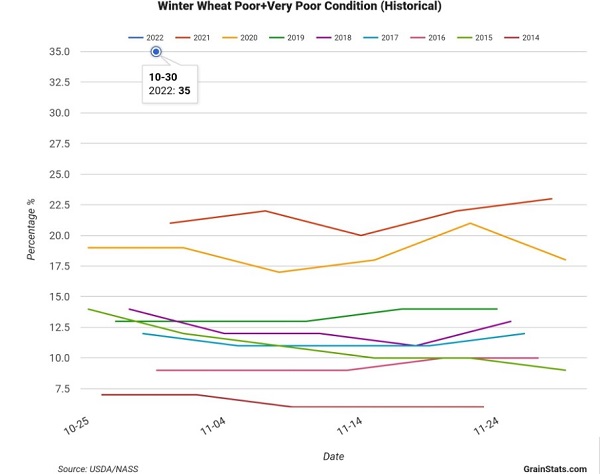 CORN HIGHLIGHTS: Corn futures followed the soybean and wheat markets higher, adding 6-1/4 cents in December to close at 6.97-3/4. December 2023 gained 3-3/4, ending the session at 6.29-1/2. International events gave prices a boost today. Protests and road blockages in Brazil over the election of a new president and insurance companies indicating they would not insure ships in the Black Seas added additional upward pressure on price.

Harvest is in its later stages with producer’s full steam ahead of what appears to be a chance of rain later in the week. As of Sunday, 76% of corn was harvested and 88% of soybeans. Good ethanol demand is keeping bids active in parts of the Midwest. We also believe, however, there are just enough farmers willing to sell some off the field that upside price potential, at least for now, is limited. Yet, many are finished with harvest and the bin doors are closed tight. Fallout from the war is supportive and, while likely temporary, attention be paid to unrest in Brazil. Export business could quickly shift to the U.S. despite low water levels in waterways. Soybean inspections last week were outstanding suggesting many are scrambling to make exports and movement of soybeans happen. Soymeal will continue to experience good demand. The most recent crush report suggested processors could bid higher for soybeans and this week they are. Ultimately, this provides a level of support for corn. Yet, the cautious side of our analytics suggests exports need to improve soon to avoid another USDA downgrade.

SOYBEAN HIGHLIGHTS: Soybean futures closed higher again today and successfully broke out of their trading range as domestic demand continues to strengthen thanks to soaring crush margins. Higher crude oil and solid export inspections have supported the soy complex as well. Nov soybeans gained 19-1/4 cents to end the session at 14.07, and Jan gained 19-1/4 at 14.19-1/2.

Soybeans started the day lower, but gained progressively into the close as bullish bits of news popped up. In Brazil, truck drivers have been intentionally blocking roads to protest President Bolsonaro’s loss in the October 30 election. This has caused trucks transporting grains to have difficulty reaching their destinations and may cause delays for cargoes headed to China. By noon today, police have removed 306 of these blockades, but over 260 are still in place. Another bullish bit of news is that China is reportedly dropping their zero-Covid policy, which has caused dozens of cities and millions of citizens to be locked down. In theory, this should increase demand for soy products, but China has been an eager buyer of beans anyways. Last week, 94.6 mb of beans were inspected for export, which is a big number considering that the Mississippi River is nearly out of commission for barges transporting grains. Soybean harvest is now 88% complete in the US, lower than the average trade guess, but 10% higher than last year. Tomorrow, the Fed is expected to raise rates by another 75 basis points, but will hopefully allude to a slowing of rate hikes beyond this one. Jan beans have broken out of the range they were in for the past month and are currently sharply above the top of their Bollinger Band and are approaching overbought territory, and some profit taking may take place tomorrow.

Despite earlier weakness, wheat came back with a vengeance. There is still much uncertainty around the Black Sea export situation. Initially, it sounded like Russia would outright close the corridor, but then Putin came out and said that it is only closed temporarily. In any case, there are said to be 218 vessels that are right now blocked in one way or another. Some reports suggest that 101 are waiting for inspection to enter Ukraine, 22 are waiting to leave, and 95 still need to be inspected before being exported. All in all, there is still confusion as to the fate of these vessels and that is making wheat trade erratic. In the southern hemisphere, Argentina’s government is apparently talking about allowing wheat exporters to delay shipments, which raises concern about their supply. Drought there is still an issue there despite some showers. Here in the US southern Plains, some showers are providing relief, but it will take much more to overcome the dryness there. The USDA has also reported that winter wheat planting is 87% complete, but emergence is only at 62% (down from the average of 66%). Conditions though are a concern, with only 28% of the crop rated good to excellent, and 35% rated poor to very poor. This is the worst first-week rating in more than 20 years.

CATTLE HIGHLIGHTS: Live cattle futures saw additional selling pressure, consolidation within Monday’s trading range as the market is waiting for the cash trade to develop this week.  Feeder stayed under pressure with a firmer grain market on Tuesday.  Dec lost 0.525 to 151.875 and Feb. cattle dropped .575 to 155.250.  In feeders, Nov feeders lost 0.700 to 176.925.

After gapping lower on Monday, Dec live cattle traded within that range and consolidated on Tuesday, looking for direction.  The price action to start the week has been soft on both live and feeders, challenging the chart technically.  Cash trade is still undeveloped on Tuesday as bids and offers are still eluding the market.  Business will likely pick up later in the week with expectations of higher trade again this week.  Cattle slaughter numbers may be starting to slip, Monday’s cattle slaughter was revised lower by 5,000 head, and Tuesday was 128,000 head, down 1,000 from last week.  Retail values were mixed at midday as choice carcasses added .75 to 264.40 and select down 1.42 to 233.04 on moderate movement of 72 load.  The choice/select spread stays supportive at a moderately wide 31.36 between the two, reflecting the demand for quality retail beef and the current feedlot situation.  Feeders stayed under pressure from the strong grain market tone, and feeder charts look tired, and softer technically.  The Feeder Cattle Index traded .51 lower to 176.97, relatively in line with the futures market.  Cattle charts look tired and defensive, which fall into a seasonal window.  Cattle prices have a tendency to lift going into the Thanksgiving Day holiday, but some weakness may be in front of the market first.

LEAN HOG HIGHLIGHTS: Lean hog futures finished mixed to slightly higher on a choppy trading day as the weakness in retail markets keeps a limit of the near-term direction.  Dec hogs gained .275 to close at 85.200 and Feb was unchanged at 88.450.

Hog futures held support at the 200-day moving average for the third consecutive session as prices consolidated after last week’s weakness.  December is supported by a strong discount to the Lean Hog Index, reflective of cash prices.  The index traded .02 higher on Tuesday to 93.79, and holds an 8.59 premium to the futures.  This provides support for the front month contract, but cash prices may slip.  Direct cash trade on Tuesday was firm, gaining .34 to an average of 87.71, and a 5-day rolling average of 94.01.  Retail values are a concern as midday carcasses dropped 2.24 to 97.70 on movement of 195 loads.  The Pork Carcass Index is challenging the October low, losing .43 to 99.06.  The weak retail values may make it difficult for packer to bid for cash hogs.  The hog market is holding support, but may be on a slippery slope if the cash market and retail demand can’t find some traction.  Seasonally, strength comes into the hog market around the 10th of November for a push higher on holiday demand, we will see if that can hold true again this year.

DAIRY HIGHLIGHTS: For the second day in a row, heavy selling pressure in the US spot butter trade took the market down double digits for the day. Spot butter closed Tuesday at $2.70/lb, which is down 44c over the past two days. There were no loads traded on Tuesday. Meanwhile, US spot powder fell 3c to $1.3950/lb which sets a new low of year for that market. The combination of these two products working lower is starting to put pressure on the class IV trade. Second month class IV was down 69c to $22.61 while the December contract fell 85c to $20.33. The Global Dairy Trade auction from this morning kept the market under pressure as well from another 3.90% decline. In the past three auctions, the GDT price index fell 3.50%, 4.60%, and now 3.90%. Global dairy prices are weakening steadily.