The choice/select spread in retail beef can be a good indicator of the state of the cattle markets and the demand for retail beef.  The choice/select spread is trading over the $30 level, and at the highs for the past year.  This indicates a strong demand for higher grading beef, bringing premium into the choice value.  In addition, the feedlot conditions are looking fairly tight and current, keeping the supply higher, grading beef at a minimum, helping to support the choice price levels.  The strong choice/select spread helps support cash cattle prices as the higher choice prices help the packer margins, allowing them to keep bids strong for higher quality beef, which has been reflected in the cash market strength the past few weeks. 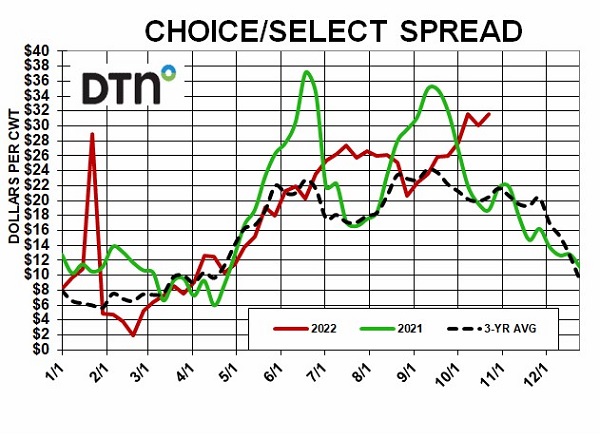 CORN HIGHLIGHTS: Corn futures finished down 10-1/2 cents to close at 6.87-1/2 and Dec 2023 lost 4-1/2 to end the day at 6.25. Both contracts finished the session about in the middle of their trading range. Wheat price dumped today and pulled corn with it. Front month wheat contracts finished well more than 50 cents lower as Russian President Putin did an about face with his decision to pull out of the negotiated export corridor agreement, indicating grain will flow through the Black Sea. This news had wheat prices quickly retreating.

Providing support is a strong week of ethanol grind with last week’s figure at 104.53 mb, a figure not seen since the end of July. The weekly figure needed to meet USDA projections is 103.145 mb. Harvest pressure will keep prices in check with the 7.00 area again acting as support. Traders continue to buy dips and sell rallies. Both bulls and bears have arguments that are worthy, however, slow exports and a lack of friendly perceptive news is still concerning. The Federal Reserve did raise interest rates by .75% and seemed to signal more interest rate hikes are coming. The initial reaction was a quick drop in equities and rise in the dollar. In other words, hopes of a smaller increase and thoughts it was already factored into the market vanished. A higher dollar could keep exports in check. Brazil continues to be market for China.

SOYBEAN HIGHLIGHTS: Soybean futures ended up closing higher despite opening lower along with the rest of the grain complex. Soybeans were not so easily rattled by the news that the Black Sea grain deal was set to continue, and the strength of soybean oil supported beans by further increasing crush margins. Nov soybeans gained 4-1/4 cents to end the session at 14.40, and Jan gained 6-1/4 at 14.54.

The entire grain complex was shaken this morning on news of the probable renewal of the Ukrainian grain deal, which brought soybeans lower as well, even though the soy complex is much less sensitive to Ukrainian export news. Bean oil continued its bull run and supported soybeans higher for an overall higher close. Usage of bean oil for biodiesel has been ramping up significantly and has brought crush margins to record highs, causing processors to aggressively buy beans, keeping soybean basis strong during harvest time. Malaysian palm oil jumped nearly 4%, and Indonesia is about to test a 40% mixture of palm oil in diesel starting this December, but their production has been limited by workforce shortages. The Census crush for September was 168 mb, below the 175 mb in August, but still above last year’s 164 mb. While strong domestic demand due, thanks to big crush margins, has been a leading bullish factor, export demand has been good and Brazilian truck drivers continue to block the roads in protest of the election stalling soy shipments. The road leading to a major port in Parana in Brazil is still blocked. Soybeans have broken to the upside and held there, so technical buying will likely come into play as well. Jan beans are trading above all their moving averages and above their upper Bollinger Band but are reaching overbought territory.

After the reversed decision from Russia to allow Ukraine to continue shipping grain, the wheat market plunged and was unable to recover. Insurance companies will reportedly be resuming the issue of policies for these vessels as well. This news, however, does not indicate as to whether or not the original deal will still expire towards the end of November. In any case, there is still a lot of bullish news out there. Argentina remains in drought and their government has apparently said they will delay wheat shipments because of that. They may also reduce future exports. Australia’s crop is also questionable; though projected to be near record large, the heavy rains they have received may result in much of the crop being downgraded in quality. Then you have the US southern Plains, in which extreme drought is also an issue. Forecasted rains are expected to stay to the east of the HRW areas, leaving that region struggling. This week’s USDA good to excellent rating of the winter wheat crop was the lowest GTE rating ever (since they have been keeping data). In general, global wheat supplies remain tight, and none of the aforementioned issues are helping that situation.

The lack of cash market activity has kept the front end of the live cattle market bleeding lower. The price action to start the week has been soft, challenging the chart technically.  Cash trade is still undeveloped on Wednesday as bids and offers are still eluding the market. The Fed Cattle Exchange traded on Wednesday and saw bids firm over last week to $148-$149.25, but no sales were triggered, not meeting reserve prices.  The expectation is for cash trade is to trend higher over last week, and if realized, this would put cash at a premium to the front month December futures.  Business will likely pick up later in the week with expectations of higher trade again this week.  Cattle slaughter numbers saw an estimated 129,000 head, even with last week, but 7,000 greater than a year ago. Retail values were higher at midday as choice carcasses added .79 to 263.42 and select added 2.28 to 235.01 on moderate movement of 93 loads.  The choice/select spread stays supportive at a moderately wide 28.41 between the two, reflecting the demand for quality retail beef and the current feedlot situation.  Weekly export sales will be released on Thursday morning, and that could help price direction for the day.  Feeders rebounded on the strong drop in wheat and pullback in corn prices. The feeder charts look tired, and softer technically, but if grain remains range bound to lower, that could support prices.  The Feeder Cattle Index traded .32 higher to 177.29.  Cattle charts look tired and defensive, which fall into a seasonal window.  Cattle prices have a tendency to lift going into the Thanksgiving Day holiday, but some weakness may be in front of the market first.  things may perk up if cash trade can a stay firmer week over week.

LEAN HOG HIGHLIGHTS: Lean hog futures finished mostly lower as the weakness in retail markets keeps selling pressure in the hog market.  Dec hogs dropped 1.900 to close at 83.300 and Feb was 1.250 lower at 87.200.

Hog futures broke through the 200 and 110-day moving averages, which triggered additional long liquidation, as prices fell to the 50-day moving average, which is a 38% retracement of the latest rally.  The 50% retracement and next downside target for Dec hogs may be the 81.250 area.  Retail values continue to struggle, forcing the buyers out of the hog market.  Retail values are a concern, but midday carcass values held firm, gaining .12 to 97.33 on movement of 182.33 loads.  The Pork Carcass Index is challenging the October low, losing .24 to 98.82.  Weekly exports sales could be a key on Thursday morning as the market is looking for increased export demand at these lower price levels. Overall, the weak retail values will make it difficult for packer to bid for cash hogs. Direct cash trade on Wednesday was soft, losing .53 to an average of 87.18, and a 5-day rolling average of 88.54. December could be supported by a strong discount to the Lean Hog Index, reflective of cash prices.  The index traded .04 lower to 93.75 and holds a 10.450 premium to the futures.  This provides support for the front month contract, but cash prices may slip, especially given the weak retail market. The hog market may be on a slippery slope if the cash market and retail demand can’t find some traction.

DAIRY HIGHLIGHTS: The big storyline for dairy to start this week has been butter and the fact that it has fallen 17% in the past three days. Following Monday’s drop of 19.50c, butter lost 24.50c yesterday on no loads traded, and closed Wednesday down another 9c to $2.61/lb on 15 loads traded. Buyers finally stepped in to grab cheap inventory, but the selling pressure still outweighed the buying support. With butter in freefall, most class IV milk futures contracts have worked back below $20.00 in recent sessions. Pressure also comes from powder, which again today made another new low for the year. The global butter and powder markets have been under pressure for months and that weakness is spilling over into the US.