One of the factors that is supporting the soybean market overall is the value of the soybean crush.  The crush is the value of the soybeans before turned into soybean meal and soybean oil by processors.  The December crush is trading at its highest levels of the year, as the value of soybean oil and soybean meal have been supportive of the crush value.  The strong crush margins allow processors the ability to keep cash bids strong for the freshly harvest grain bushels.  In the current cash market, cash markets along the river have been pressured due to slow river traffic effected by low water levels, but domestic crushers have been aggressively covering supplies and bidding up to secure soybean.  In the near-term, with the tight overall U.S. soybean supply picture, the domestic crush should help support the market. 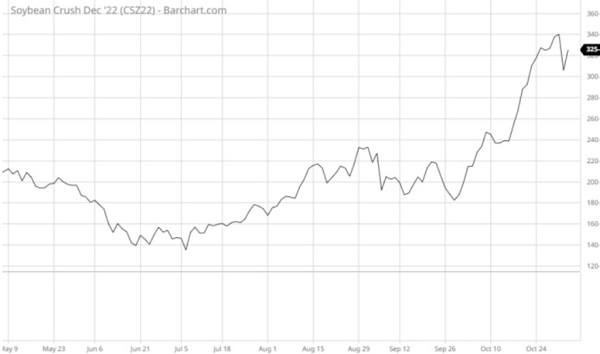 CORN HIGHLIGHTS: Corn futures finished lower for the second consecutive session, losing 8-1/4 cents in December, closing at 6.79-1/4, its lowest close since Oct 19. December 2023 gave up 1-1/4 to end the session at 6.23-3/4. Double digit losses in soybeans, weaker wheat prices, and sharp gains in the U.S. dollar weighed on futures today. Export sales remained sluggish with today’s figure at 14.7 million bushels. Year to date sales are 570 mb verses 1.221 bb a year ago.

We are not making the argument that corn has made a turning point, but a test of 7.00 and failure, coupled with the changing news out of Ukraine, as well as a sharp gain in the dollar, all doesn’t bode well. The longer the market trades in a sideways patter after a rally (late July – August) the market is more vulnerable to a breakout in price. Moving averages catch up to the market and if prices were to slip under these levels, it could create liquidation. Managed money was net long near 264,000 contracts as of Tuesday last week. Bottom line, liquidation is a possibility. Still, a smaller crop and strong basis in the western Corn Belt is confirming tight supply. Farmer selling, especially on price setbacks, remains slow. Downside price potential is likely limited. However, if behind on sales, either catch up or consider purchasing puts to establish a flow. We are not so concerned with the fundamentals on corn as we are with the potential for outside markets or world events to pull the rug out of prices.

SOYBEAN HIGHLIGHTS: Soybean futures closed lower today with pressure from outside markets, a jump in the dollar, and export sales that were not as strong as expected. Meal and nearby bean oil closed lower as well, likely caused by some profit taking as well. Nov soybeans lost 13-1/4 cents to end the session at 14.26-3/4, and Jan lost 17 at 14.37.

The fundamentals have been bullish this week with domestic demand so high, China potentially dropping their zero-Covid policy, and the Brazilian truck drivers blocking off main roads in protest. The technicals on the other hand became overbought for soybeans and bean oil, and some profit taking most likely occurred. Export sales were not much of a help with 30.5 mb of sales last week, but shipments strong at 97.4 mb shipped, well above the weekly average of 40.4 mb needed to reach the USDA’s estimate. Total sales commitments are now 1.187 bb, and 1% higher than a year ago. Soybeans reacted more than the other grains to the Fed’s decision to raise rates by another 75 basis points yesterday as this caused the dollar to jump, making US beans even more expensive than South American options. China was a main buyer of US beans last week showing that they still need the US beans. Brazilian planting is near 50% complete, and conditions are forecast to be dry for both Brazil and Argentina for the next week at least. The truckers protesting the election results are still causing 126 blockades in 14 of 26 states despite law enforcement threats, and some of these roads lead to port cities. Jan beans are overbought and closed below their 200-day moving average today but remain broken out of their sideways trend. Soybean oil is still overbought technically but hasn’t shown signs of slowing just yet and is above all its moving averages.

Despite a mixed close, it was impressive that wheat was able to settle well off of daily lows, especially in the face of a sharply higher US Dollar. Early pressure likely came from follow through selling on Russia’s decision to reopen the Ukraine export corridor. To clear up any confusion, the November 19 expiration date for the deal is still in place and there has not been a determination yet as to whether it will be extended beyond then. Also impacting the wheat market today (and perhaps what helped it come back) was news that the Zaporizhzhia nuclear power plant has been disconnected from the power grid yet again. This is the largest nuclear plant in Europe and has been knocked offline by new Russian strikes. News outlets are reporting that the plant is running on diesel generators to cool the reactors, but there is only enough fuel to keep them running for 15 days. Without a constant supply of power, the reactors run the risk of meltdown. Besides this news though, fundamentals are bullish. Reports of flooding in Australian wheat areas, drought in Argentina, and drought in the US southern plains are all concerns. In other news, today the market also received export sales data; the USDA reported an increase of 12.8 mb of wheat export sales for 22/23.

Outside markets and strong U.S. dollar pressured markets in general on Thursday, but live cattle futures found a way to hold and consolidate.  Prices were pressured early, and prices reversed toward the session highs at the end of the day. Cash trade got started on Thursday with southern deals at $150, fully steady with last week, and northern dress trade was registered at $242m up $2 from last week.  Additional trade will be likely going into tomorrow, and steady to higher trade supported the market.   Cattle slaughter was estimated at 128,000 head, even with last week, but 5,000 greater than a year ago. Retail values were higher at midday as choice carcasses added 1.51to 264.98 and select added .53 to 233.69 on moderate movement of 60 loads.  The choice/select spread stays supportive at a moderately wide 31.29 between the two, reflecting the demand for quality retail beef and the current feedlot situation.  Weekly export sales were disappointing on Thursday morning, as the USDA announced new sales of 9,200 MT for 2022 with Japan, South Korea, and Taiwan as the top buyers of US beef last week. Feeders were soft even with the weakens in wheat and corn prices. The feeder charts look tired, and softer technically.  The Feeder Cattle Index traded .34 higher to 177.63, holding a discount to the November futures, limiting the buying strength.   Cattle charts look tired and defensive, which fall into a seasonal window.  Cattle prices have a tendency to lift going into the Thanksgiving Day holiday, but some weakness may be in front of the market first.  Despite the overall lack-luster tone in the market today, the price action in the front-end of the cattle market is still supportive and encouraging.

LEAN HOG HIGHLIGHTS: Lean hog futures were mostly lower despite a strong week of export sales last week as the poor retail market trend keeps the buyers on the sidelines.  Dec hogs gained .075 to close at 83.375 and Feb was .025 lower at 87.175.

Hog futures traded between the 100 and 50-day moving averages on Thursday as prices consolidated.  A break lower below the 50-day could set up a downside target for Dec hogs in the 81.250 area.  Weekly export sales were strong last week as the USDA announced new sales of 47,900 MT for 2022 in this week’s export slae report.  Mexico, China and Japan were the top buyers of U.S. pork last week.  Those strong sales were triggered by the weak retail market prices. Retail values have struggled recently, forcing the buyers out of the hog market.  Retail values are a concern, but midday carcass values held firm, gaining 1.56 to 97.79 on movement of 168 loads.  The Pork Carcass Index is challenging the October low, losing .29 to 98.53.  Overall, the weak retail values will make it difficult for packer to bid for cash hogs. Direct cash trade on Thursday was soft, losing 1.28 to an average of 85.90, and a 5-day rolling average of 87.07. December could be supported by a strong discount to the Lean Hog Index, reflective of cash prices, but the index is trending lower, closing the gap.  The index traded .46 lower to 93.29 and holds a 9.915 premium to the futures.  This provides support for the front month contract, but cash prices may slip, especially given the weak retail market. The hog market may be on a slippery slope if the cash market and retail demand can’t find some traction.

DAIRY HIGHLIGHTS: Milk futures and the underlying spot markets all put together a nice recovery day after the recent bloodbath, conjuring questions if this is a “dead cat bounce” or if the break was overdone. December Class III futures took advantage of the expanded limits to close up 81 cents at $19.87, solidifying support at $19.00 on the running second month chart. The December Class IV contract was 45 cents higher to $20.82 as the spread between the second months has fallen to 95 cents with the roll, the smallest Class IV premium since May. After a wild couple weeks in the spot trade, tomorrow’s Dairy Products Production report will be watched for any fundamental shifts on the supply side of the balance sheet.