September soybean export numbers to China were very disappointing for the month.  Aside from the trade war year in 2018, the September soybean shipments to Brazil in September were the worst since 2008 with only 8-9 cargoes being shipped.  A couple reason were in play causing this reduced shipment pace this fall.  First, logistic issues and transportation issue limited movement of soybeans to key export areas.  Secondly, the overall tight supply picture limited the number of soybeans available to be shipped.  Export shipments have surged in recent weeks as fresh supplies have hit the pipeline with soybean harvest this fall.  The past couple of weeks, export shipments have been nearing or exceeding 2 MMT each week, as export numbers in October will likely jump. 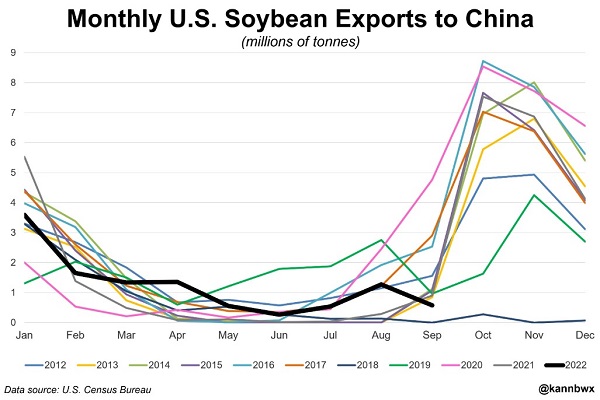 CORN HIGHLIGHTS: Corn futures, after two consecutive down days, found support early on sharply higher soybeans and a drop in the dollar, gaining more than 5 cents. Yet, positive news for corn was lacking and it didn’t take long for prices to trade into negative territory. Eventually, prices climbed to positive territory with December gaining 1-3/4 cents on day to close at 6.81. For the week, December added 0-1/4 cents, while March finished unchanged. December 2023 added 4-1/2. To say the market is consolidating may be an understatement. Yet, this type of trading is not unusual during harvest as price base building is a typical pattern. What is interesting this year is the base building is occurring at historically high prices, reflective of tight inventory and lack of strong farmer selling.

Next week, the USDA will release the WASDE report. A pre-report rundown of the numbers (average of analysts’ estimates) from the Wall Street Journal indicates little change is expected with yield forecasted at 171.9 bpa. A slight increase to carryout estimated at 1.212 bb, up 50 mb from last month is also anticipated. Concerns the export market is off to such a slow start may prompt additional reductions. Talk of China easing Covid restrictions seems to be providing a positive tone, especially in soybeans where double digit gains were notched with most contracts near 25 cents higher on the day. China has approved up to export facilities in Brazil pretty much confirming they will buy Brazilian corn. While not new it does continue to show two things: China’s dependency on foreign corn despite being the worlds second largest producer and more competition for the U.S. On the other hand, any short fall of expected production will provide fodder for bullish traders.

The bean oil market has been on fire and a main source of support for soybeans. Crude oil jumped sharply, along with other world veg oil prices today, as renewable diesel production ramps up. Palm oil rose by 10% this week, and Jan canola futures have broken out for a fifth higher consecutive close. Board crush margins are at contract highs, but also at the highest levels on record, and processors are aggressively buying beans to take advantage of that. Domestic demand is strong, and the US is also shipping soybeans at a pace of about 100 mb for the past three weeks, despite the Mississippi’s abysmal water levels. Soybean export sales were 30.5 mb, but total sales commitments are 1% higher than last year, compared to 5% higher a few weeks ago. Export demand may slow as China is reluctant to buy any more soybeans from the US than necessary and looks to Brazil for the majority of their needs. ANEC has reported that Brazil’s soy exports for Oct were 3.57 mmt, down from last year’s 2.98 mmt. In more bullish news, China is rumored to be relaxing their zero-Covid policy, which should pump up demand. Trade expectations for next week’s WASDE report on Wednesday are a bean yield of 49.8 bpa, and a crop of 4.325 bb. Jan soybeans are overbought and closed above their 200-day moving average, while Dec bean oil continues to soar higher above all moving averages.

Talk that China may significantly alter or ease their covid lockdown policy may have been the catalyst affecting markets today. There certainly was a reaction from soybeans (which closed about 25 cents higher) and may have pulled up wheat and corn as well. The US dollar was also sharply lower today and though trading in a relatively wide range, the Dow is up about 260 points at the time of writing. After the lower closes of the past two sessions, it was good to see wheat gain back some ground today. The focus for this market over the past week has been the Ukraine export corridor, and there still has been no word as to if the deal will be extended beyond the original expiration date of November 19. Most likely, Russia would ask for sanctions to be eased before agreeing to anything. Elsewhere, there will also be impacts to the wheat market. The Buenos Aires Grain Exchange has reduced their projection of Argentina’s wheat production to 13 mmt; this is 4.5 mmt below the USDA in October, and 10 mmt below what they had last year. Australia will also have an influence – some are calling for as much as 8 mmt of their crop being downgraded to feed quality due to the heavy rains and flooding.

Cattle markets were quiet and choppy overall to end the week as most of the fundamental news to move the market for the week was done. Cash trade was quiet on the day as most business was done for the week. Trade this week saw southern live deals have been marked at mostly $150, fully steady with last week’s levels. Northern dressed sales have been at mostly $242, $2 higher than last week. Cash trade was slightly disappointing as the market was focused on more aggressive trade.  December futures is trading in line with the cash market, limiting the market’s near-term upside.  February was at a premium, and that provided light pressure. Retail values were softer at midday as choice carcasses slipped .37 to 264.81 and select slid .36 to 232.70 on light movement of 65 loads.  The choice/select spread stays supportive at 32.11 between the two, reflecting the demand for quality retail beef and the current feedlot situation.  The strong value for Choice retail beef and the spread should help keep the cash market supported into next week.  The feeder charts look tired, and softer technically as prices faded during the day.  Feeder prices may be moving into a range bound trade, reflecting the strength in live cattle, but being held in check by the index and grain prices. The Feeder Cattle Index traded .34 higher to 177.63, but trade 1.76 higher on the week. The Cash index is currently in line with the November futures, which could be limiting the buying strength with November expiration on 10/17.   Cattle charts look tired and defensive, which fall into a seasonal window.  Cattle prices have a tendency to lift going into the Thanksgiving Day holiday, but some weakness may be in front of the market first.  Cash trade is still the key for price support and the path overall, and those fundamentals supporting the cash market are still friendly.

Hog futures continue to drift lower, closing the week under 50-day moving average, setting up a weak technical picture going into nest week.  A break lower below the 50-day could set up a downside target for Dec hogs in the 81.250 area.  The weak retail market and its lack of support to the cash market keep hog buyers on the sidelines.  Retail values have struggled recently, forcing the buyers out of the hog market.  Retail values are a concern, but midday carcass values held firm, gaining 1.14 to 96.04 on movement of 195 loads.  Pork carcass values have trended lower throughout the week. The Pork Carcass Index has broke to new lows for the year, losing .45 to 98.08 and traded 1.36 lower on the week. Overall, the weak retail values will make it difficult for packer to bid for cash hogs. Direct cash trade on Friday stayed weak, losing 1.74 to an average of 84.16, and a 5-day rolling average of 86.54. December could be supported by a strong discount to the Lean Hog Index, reflective of cash prices, but the index is trending lower, closing the gap.  The index traded .95 lower to 92.34 and lost 1.81 on the week. The Cash index holds a 9.365 premium to the futures.  This provides support for the front month contract, but cash prices look like they are on a slippery slope, especially given the weak retail market. The hog market looks both technically and fundamentally weak, especially if the cash market and retail demand can’t find some traction.

DAIRY HIGHLIGHTS: Class III milk futures were the big winners of the week with December contracts gaining $1.51 per CWT to settle after Friday’s trade at $20.35. December Class IV contracts were both volatile and higher on the week, gaining 13 cents to settle at $21.47, but also managed a low of $20 during Wednesday’s trade. Spot butter took a massive hit this week, falling 53 cents from Monday to Wednesday, recovering during Thursday and Friday to shed just over 36 cents per pound on the week. This massive selloff has the spot butter price under $3 per pound for the first time since late August. Other major spot markets were mixed this week with whey gaining nearly 4 cents per pound, powder down 3 cents, and cheese up a nickel. The dead cat bounce may still be true here but follow-through buying on yesterday’s gains may indicate further gains next week.