The November USDA WASDE report brought few surprises but did increase the size of the U.S. corn crop. The November WASDE report was released during the session, and the USDA moved the yield for corn up 0.4 of a bushel to a yield of 172.3 bushels/acre. This adjustment added 35 mb to this year’s corn crop as supplies grew slightly larger. The market was focused on the demand side of the balance sheet, and the USDA adjusted feed usage up 25 mb, allowing for a 10 mb jump in carryout projections for next year at 1.812 billion bushels. This was slightly under market expectations. The area the market was focused on, export demand, was left unchanged. The USDA may have felt it was too early in the marketing year to make those adjustments. Export demand has been a disappointment at this point of the marketing year as corn shipment inspections are running 27.5% behind last year in this window. This may, and will likely, mean additional export adjustments will be needed in the future. 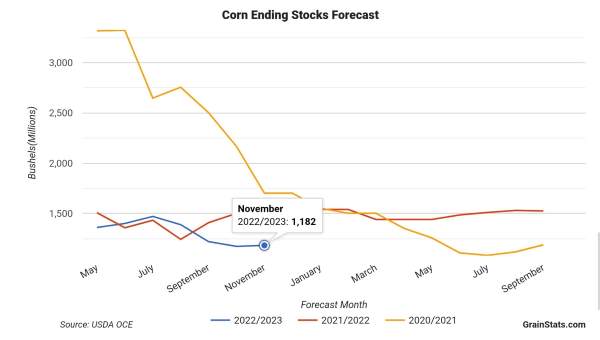 CORN HIGHLIGHTS: Corn futures finished lower for the third consecutive session, fading into the close. Dec gave up 3 cents to end the day at 6.64-1/2. Dec of next year lost 5 cents to close at 6.14-1/4. Double-digit losses in the wheat market, a higher dollar, and lower energy prices pulled on corn futures. The WASDE report was termed neutral. Dec futures broke the 200-day moving average but did manage to recover back to this level. However, the technical picture was bruised today with a less-than-stellar close.

Today’s USDA reports contained little new information as most of the numbers were termed neutral. Yield did increase from 171.9 bpa to 172.3 bringing total production to 13.930 bb. The average pre-report estimate for yield was 171.9. Carryout increased 10 mb to 1.182 bb for the 2022-2023 marketing year. World ending stocks saw little change with today’s figure at 303.7 mmt versus last month’s 307.1. U.S. ethanol rose to 1.051 million barrels a day for the week ended November 4. This is up from 1.04 million barrels per day reported last week and marks the highest production since late June. Corn used to grind ethanol last week came in at 105.6 mb, the highest figure since late July. Now that the November Supply and Demand report is behind the market, news of consequence may be lacking until South American weather is more impactful. Unless exports pick up soon, prices may continue to drift. The urgency to own by end users is lacking.

Beans traded higher following today’s WASDE report which saw adjustments to ending stocks, production, and world ending stocks. For 22/23 US crop production, soybean yields were raised and estimated at 50.2 bpa from last months 49.8 bpa. Production was increased to 4.346 bb compared to last month’s 4.313 bb. USDA world ending stocks were also raised at 102.17 million tons compared to last month’s 100.52 mt, and U.S. ending soybean stocks were increased to 220 mb from 200 mb. Export estimates of 2.045 bb were unchanged. The two bullish pieces to today’s report were increases of China’s import estimate for 21/22 of 1.57 mmt, and a 1.5 mmt reduction in Argentina’s soybean crop estimate for 22/23, now at 49.5 mmt. This morning the USDA announced a 17 mb sale of soybeans with 9.7 mb to China and the rest to unknown destinations for 22/23. Despite their zero-Covid policy and lockdowns, demand for soybeans in China remains firm, and January soybeans on the Dalian exchange are near their four-month highs at the equivalent of $18.75 per bushel. Soybean supplies are tight and basis is historically strong, supporting the soy complex. Jan beans are trending higher and technically overbought, but again managed a close above their 200-day moving average.

All eyes were on today’s WASDE report which, for wheat, was not unfriendly. But wheat futures sank lower into the close regardless. U.S. ending stocks were reduced to 571 mb (vs 576 mb last month) which is still the lowest number in 15 years. World ending stocks were increased slightly and the more important changes were probably in the Southern Hemisphere. Argentina’s crop was reduced by 2.0 mmt and Australia was increased by 1.5 mmt. There were no changes to crops or exports for Russia or Ukraine. Aside from the report, the big factor continues to be uncertainty surrounding the Black Sea export deal. Turkey is trying to get an extension on the corridor for 12 months which may be offering resistance to wheat and corn. The UN and possibly NATO are also pushing for sanctions on a key Russian bank to be lifted which would allow Russia to increase fertilizer and grain exports. Currently, Russia is on pace to meet the USDA’s export goal of 42 mmt, but some think it could total as much as 44-47 mmt. U.S. exports have struggled with prices currently higher than France, Germany, and Russia. If there is a silver lining, it could be the fact that the U.S. Dollar Index has fallen to the lowest level in weeks, and this tends to share an inverse relationship with wheat. In other news, blizzard conditions across the PNW and northern Plains will likely slow movement there. Also, China’s Zero-Covid policy continues to raise concerns about demand. Their producer price index came out lower than expected, which could mean lower inflation but could also mean lower imports of raw materials.

CATTLE HIGHLIGHTS: Live cattle futures had a disappointing day as early indications of cash trade were steady at best, and strong selling in equity markets spilled over into the cattle markets. Dec finished down 1.475 to 151.5754 and Feb cattle lost 0.625 to 154.150. In feeders, Nov feeders lost 0.550 to 177.725.

The cash market looks to hold steady trade on early southern deals at $150, but may not be enough to set a trend. If realized, this would run steady with last week, and be disappointing to a market that built some premium into the front end over cash, anticipating higher trade in general. More trade will likely develop going forward into the end of the week, and the market will be watching closely to see if these numbers from today hold. The cash market tone helps support this market as the supply of animals is looking to tighten into the end of the year. Retail values were lower at midday as choice carcasses lost 0.12 to 264.82 and select trade was 0.05 lower to 236.00 on light movement of 95 loads. The estimated slaughter for Wednesday was 129,000 head, even with last week, but still up 3,000 versus last year. Expectations are for a heavier slaughter run this week and next, which could limit the cash market. Feeders finished mixed to mostly lower despite a weaker tone in the grain markets. Feeder prices may be moving into a range-bound trade. Jan is still in an overall uptrend but holding support at $178.00. The Feeder Cattle Index traded 0.32 lower to 176.59. The cash index is currently at a discount to the Nov futures, which could be limiting the buying strength with Nov expiration on 11/17. Cash trade is still the key for price support and the path overall, and early indications were disappointing at steady trade. The fundamentals supporting the cash market are still friendly, but cattle markets look choppy going into the end of the week.

LEAN HOG HIGHLIGHTS: Lean hog futures finished mixed as traders moved out of Dec positions rolling to Feb, pressured by the continued weakness in the retail market. Dec hogs lost 0.300 closing at 85.275 and Feb was 0.650 higher to 89.150.

The constant pressure of weak retail prices and soft cash market tone had traders moving out of the Dec contracts and pushing into Feb or other deferred months. The spread between Dec and Feb jumped 1.050 during the trading session. The weak retail market and its lack of support to the cash market continue to be limiting factors to any sustained hog rally. Retail values found some support at midday, as pork carcasses traded 1.82 higher to 96.96. The load count was at 181 loads. The Pork Carcass Index is still trending lower, losing 0.44 to 96.25, and trading at its lowest point since February. The Pork Cutout Index is on a similar path to last year, as index values dropped, hitting a low in early December before turning back higher. Overall, the weak retail values will make it difficult for packers to bid for cash hogs. Direct cash trade on Wednesday traded higher gaining 1.64. The direct trade averaged 87.75, and a 5-day rolling average of 85.79. The Lean Hog Index traded 0.60 lower to 90.28. The cash index holds a 3.975 premium to the futures which failed to provide support for the front-month contract as the spread narrowed quickly. The estimate hog slaughter today was 493,000 head, up 5,000 from last week and 14,000 over last year, keeping pork supplies comfortable in the near term. The hog market is choppy, looking for direction as the slaughter total remains strong keeping plenty of product available.

DAIRY HIGHLIGHTS: Optimism has worked its way back into Class III milk futures to start the month of November. The market is watching the cheese and butter trade recover strongly after sharp sell-offs at the end of October. In Wednesday’s trade, both spot cheese blocks and spot cheese barrels each closed over the $2.00/lb level. Blocks added 4c to $2.0650, while barrels added 2.50c to $2.01/lb. At the same time, butter was aggressively bid 10.25c higher to $2.9025/lb on 5 loads traded. This strength in the spot trade is pushing Class III milk futures back up to levels seen at the start of October. So far in November, December Class III milk is up $2.50 per cwt, while January Class III is up $1.74 per cwt. The short-term trend remains mixed at this time as price swings have been volatile. Just a few days ago, each contract in 2023 was below $20, whereas now all are back above that barrier.