The U.S. dollar index (USD) surging higher, hitting its loftiest levels since July 2020.  The strong surge in the dollar index has been fueled by the strong inflation data announced on Wednesday, the Consumer Price Index (CPI) saw headline inflation in October jump .9%, and lifted its annual rate to 6.2%.  This is the strongest since November 1990.  This has pushed the USD on anticipation of the fed tightening monetary policy sooner than later to help combat the inflation pressure on the consumer.  In addition, the USD has become the “buy” side of the spread against the Euro and the Japanese Yen in currency trade.  The push higher this week build a strong technical picture as the USD value has clear nearby key resistance at moving averages over the market.  The strong USD will be closely watched in relation to impacts on the economy and demand for U.S. commodities. 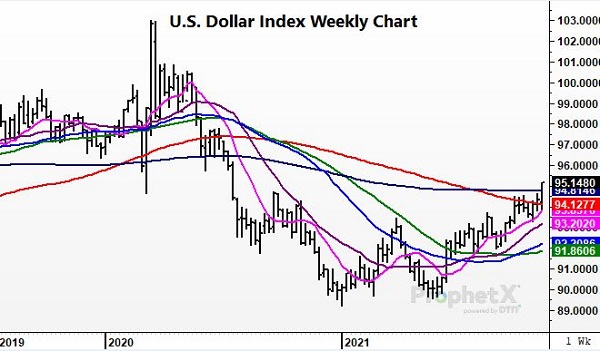 CORN HIGHLIGHTS: Happy Veterans Day to all who served! Corn futures closed quietly with little change. December finished at 5.69-1/2, up 0-1/4 and December 2022 closed 2-3/4 lower at 5.46-1/4. Gains of more than 20 cents during the morning hours for wheat pulled corn prices higher, but once wheat topped, prices declined. Farmer selling likely picked up today with prices reaching their highest level in over a week.

Export sales were not released today due to observance of the Veterans Day, but will be released at 7:30 am central tomorrow. From a news perspective, there wasn’t a whole lot new to digest for corn futures. Attention is being paid to the southern hemisphere weather, which continues to be mostly conducive. In addition, the world may be watching what appears to be increasing tensions between Russia and Ukraine. There was some talk of potential conflict and if this were to occur it is hard to say how the market might react. Recently China was said to be a noted buyer of Ukrainian corn but if there could be shipping concerns U.S. business could increase. At this point, it is speculation and with the market trading mostly unchanged today after stronger gains, it appears traders maybe more comfortable on the sideline awaiting further developments.

SOYBEAN HIGHLIGHTS: Soybean futures were the recipient of bull spreading, as front month November gained 8-3/4 cents, closing at 12.12-1/4 and November of 2022 up 0-3/4, ending the session at 12.16-1/4. Export sales were not released today due to observance of Veterans Day. Meal closed mixed to higher, while oil was mostly steady to slightly lower. The recent price bounce since the release of the USDA report on Tuesday is encouraging, yet cheaper values for southern hemisphere beans and good planting progress suggest limited upside.

When viewing the January futures contract, there is little doubt that the market has been in a downtrend since peaking on June 7 at 14.79. January beans closed today at 12.21-1/2. The recovery in price since recently bottoming just prior to Tuesday’s Supply and Demand report may be nothing more than a bounce in a market that is struggling with the reality of increasing expectations of world supply both in the northern and southern hemisphere over the next several months. Soybean prices are still likely high enough that end users will remain mostly hand to mouth and their buying practices as currently there is no apparent weather developments in the southern hemisphere that might have them concerned. Yet as we’ve mentioned on previous reports this could change quickly. Consequential weather for crop development probably is more important after mid-December then it is prior. However, compared to last year planting progress is at a much more rapid pace which in theory increases the chance of average to above average yields.

Today Chi and KC wheat made new contract highs and closed higher for the fourth consecutive session. MPLS wheat closed higher for the third consecutive session. Russia’s wheat export tax is currently around $70 per metric ton, but some analysts feel that it could get to the $100 level as Russians try to slow export demand and cheapen their domestic prices. Currently Russian wheat prices are still cheap compared to most origins. Additionally, the Russian Ag Minister stated that a new export quota will be announced soon for January – June. In other news out of Russia, there are concerns that they may invade Ukraine, which could impact not only the wheat market but commodities as a whole. There was also word out of China yesterday that the real estate conglomerate, Evergrande, defaulted on a debt payment. This is not the first time they have been in the news; not long ago there were concerns that they would collapse and that news took its toll on the financial and commodity markets. In eastern Australia more heavy rains are expected, which could compound quality and disease concerns that already exist around their wheat crop. Paris milling wheat futures again made new all-time highs today, though like the US markets they did settle back to end the session. Rains are moving across the Midwest today with some snow in the northern regions. In a longer-term outlook, the developing La Nina pattern may bring a colder winter to the US, and a drier spring and summer.