NOPA crush numbers released today for October were among some of the highest of all time. The NOPA October crush totaled 183.993 million bushels, which was above analyst estimates of 181.942 million bushels. The soybean market has seen strong buying support in recent sessions, led by a strong move in the soybean meal market, a direct product of the crush. Crush margins have been very friendly, and with profitable levels in the system, crushers have been willing to pay up for fresh soybean supplies. The October total was the 3rd largest of all time and just slightly below last year’s levels. The most disappointing factor was the build-up of soybean oil supplies found on the report. The strong oil market has been another strong driver of crush margins, but supplies may be catching up to the demand. Soybean oil stocks were 1.835 billion pounds, well above market expectations of 1.724 billion pounds. Currently, the crush margins are strong and the domestic demand has been a big support in the soybean market. 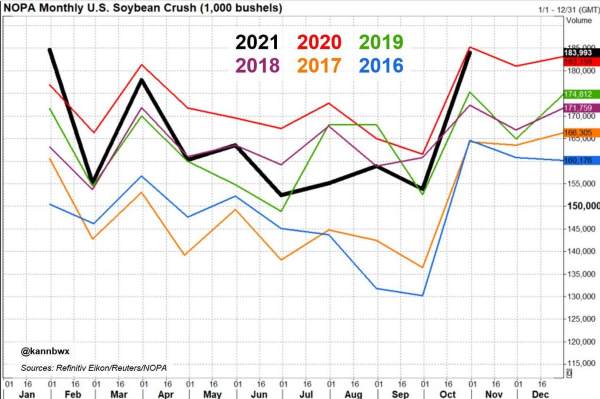 Corn prices are at a crossroads. On the one hand, futures failed to continue to move higher today despite strengthening competing markets. Strong basis levels and continued expectation that sales will pick up are providing support. Yet, China was a rather strong buyer from Ukraine this past week. South American weather is conducive to growth with likely little premium to price. Fertilizer concerns are probably the biggest factor over the next several months to guide price direction. This month the USDA confirmed 177 bushels per acre and carry out holding near 1.5 billion. Neither of these factors appear to be supportive for price at current levels. Yet, farmer selling will likely remain somewhat stingy on a lack of strong need for immediate cash flow. Many believe strong crush margins for ethanol could mean another 100 to 150 mb added to usage.

SOYBEAN HIGHLIGHTS: Soybean futures rallied again today finishing with strong gains, as Jan led today’s rally closing 13 cents higher at 12.57-1/4, its highest close in nearly 6 weeks. A continued surge in soymeal gaining 10.00 to 11.00 per ton again seemed to be the catalyst. Soymeal has now gained about 60.00 per ton in a month, with over half the gain in just over a week. Reversals of long soy oil and short soymeal spread was a noted feature. Soy oil lost 70 to 80 points.

NOPA (National Oilseed Producers Association) numbers indicated soybeans crushed at 183.993 million bushels in October. This compares to 153.8 from September, but below 185.245 crushed in Oct of 2020. Soybean oil supplies came in at 1.835 billion pounds, the highest since May 2020. A month ago, soy oil stocks stood at 1.684 billion pounds. Soy oil stocks have now risen four months in a row. We would argue there is no notable weather in the Southern Hemisphere at this time. Planting and crop maturity are either on schedule or slightly ahead. Soybean prices have struggled for some time, yet the market responded positively to last week’s Supply and Demand report even though the ending stock figure was slightly higher. Despite the idea that soybean acreage will be up in both the Northern and Southern Hemisphere over the next 12 months, prices are rallying. This is either a sign of a strong fundamental market, strong money flow, or both.

For a 6th day in a row, wheat markets pushed higher closing just a mere few cents off of the day’s highs. USDA export inspections today were reported at 388,743 mt as compared to last week’s 231,854 mt – regardless this is still under the weekly amount needed to keep up with USDA’s export estimate of 860 mb. Total wheat exports are down 21% from last year, however, tight supplies right now trump any worries with export demand. There is some hope that Russia’s increased export taxes might drive business to the U.S. However, considering U.S. wheat wasn’t competitive before last week’s rally, it’s unlikely that much business will be tendered from the U.S., just yet. Globally, Australian weather is favorable for harvest, as drier weather is expected. Areas of the U.S. southern Plains & Black Sea are still too dry and very concerning for the 2022 production and marketing year. The more important issue for wheat this week is actually military-based. The conflict in Russia & Ukraine continues to be of concern. Today, NATO ordered Russia to explain the large and unusual build-up of Russian forces spotted on Ukraine’s border in recent weeks. If Russia and/or Ukraine’s ports were to be compromised in any way, that would obviously be a challenge for the wheat market.