While the export market for corn remains a concern, the domestic cash market remains historically strong. The national corn basis is trending higher and is still positive. This is trending well above the highest levels over the past five years. The strength in the basis is coming from the lack of production due to dry conditions in the western corn belt. End users in that area of the corn belt are bidding aggressively to lock in supplies for both feed use and the ethanol industry. The basis is reflecting the efforts to “smooth” out the corn pile across the U.S. from the heavier supplies in the East to the low supplies in the West. The battle for corn domestically has lifted prices, which has limited the export demand due to cheaper corn globally from other sources. The export sales will likely pick up later in the winter and spring as the global supplies tighten and the domestic market has satisfied early needs. The strong cash market will keep some support under the corn futures market in the near-term. 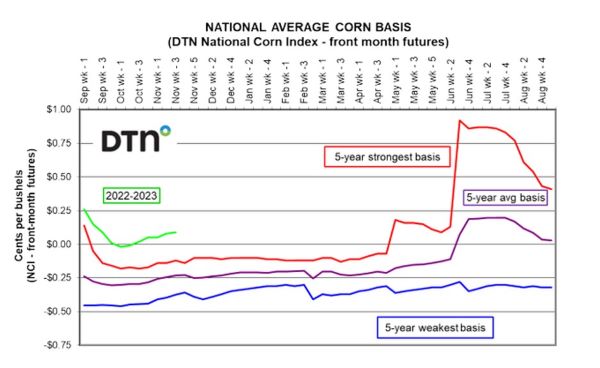 CORN HIGHLIGHTS: Corn futures weakened on the overnight trade as clarity began to surface regarding missiles hitting inside Poland. It appears the likely cause is from Ukraine defense missiles, not Russian aggression. Grains and oilseeds wasted little time giving back yesterday’s gains. Yet, by the close Dec corn closed only 1-1/2 cents lower at 665-3/4 and Dec 2023 gained 0-1/4 to end quietly at 6.14-1/2. News was sparse; however, support did come from an announced sale of 1,866,900 metric tons (73.56 mb) of corn for delivery to Mexico. Double digit losses in soybean and wheat prices were an anchor on corn futures.

The good news for bulls is that corn is holding support. The bad news for bulls is corn is holding support, not aggressively rebounding. Slow farmer selling is a feature, yet in areas, strong basis is likely buying corn. Without good weekly export sales numbers, the perception is the USDA will, at some point in the futures, cut expectation for exports. As indicated in the past, the market seems to move on either perception, momentum, or attitude of which two if not all three are not supportive for price in the near term. This will change as southern hemisphere weather becomes a greater factor and or the technical picture becomes more defined other than sideways price trade. The weekly ethanol report indicated there was just under 102 mb used for the grind this past week, down from over 105 a week ago. Attention will focus more on South American weather and production forecasts in the weeks ahead.

All three soy products closed lower today and erased all gains from yesterday’s rally. After the market closed yesterday, the dust settled on the news that a missile had struck the border of Poland, killing two civilians. Fears were that NATO would get involved but ultimately Poland acknowledge the strike as a mistake, and it hasn’t even been determined whether this missile was Russian or Ukrainian. Either way, news out of the Black Sea region typically doesn’t affect the bean market so it was unsurprising that gains from the rally were lost. Bean oil has slipped lately but has generally been holding strong. Today, crude oil fell by 1.55 a barrel and January palm oil fell by 1%, both putting pressure on the bean oil market. The drop in crude was surprising given that the DOE reported a 5.4-million-barrel drop in last week’s inventories. Yesterday’s NOPA crush report came out for October at 184.464 mb vs the expected 184.5 mb, and above the previous month’s 158.1 mb. Crush value has slipped slightly but is still highly profitable at 3.61 a bushel based on January futures. Brazil’s bean crop is the main bearish concern at a record 5.60 bb expected, and weather forecasts look favorable. For now, Jan beans remain rangebound but are at the bottom of their range just below the 200-day moving average.

Yesterday news broke that a missile killed two people in Poland, and there were fears of the conflict escalating to a global scale since they are a NATO member nation. Initially thought to be of Russian origin, the new talk is that it may have actually been part of Ukraine’s air defense system. This turnaround in the headlines also leads to an about-face in the grain markets. Additionally, Russia is still expected to agree to an extension of the Black Sea export deal because it allows them to export grain too. So far there has still not been an announcement on that front, though. The deadline for the original deal is November 19, only days away. In other news, the USDA reported a sale of 150,000 mt of HRS wheat for delivery to Iraq during the 22/23 marketing year. There has not been much more fresh news for the wheat market with the same concerns still in place about southern hemisphere crops. The US HRW wheat crop is also in jeopardy with many areas still in drought. In general, both US and global wheat supplies are limited and should offer support to the market.

Money flow resumed in the cattle market on Wednesday, recovering some of the losses from Tuesday. The cattle market is looking toward the cattle on feed report on Friday after the market close. Expectations are for the cattle supply to reflect continued tightening. Total cattle on Feed are expected to be 98.3% of last year, Placements down 96.3% of last year, and marketings at 100.8%. The placement and total cattle numbers will stay the focus of traders for both the near and long-term. In the fundamental news, Retail values were mixed at midday, as choice carcasses slipped 0.33 to 258.03, but select trade added 0.48 to 232.24 on light movement of 112 midday loads. Weekly export sales will be announced on Thursday morning, which could help provide direction for the day. Cash trade started to develop on Wednesday. In the South, some light trade was triggered at $150, fully steady with last week, but northern business was still incomplete as bids were firm. More trade will get put together over the next couple days. Today’s slaughter totaled 129,000 head, even with last week, but 7,000 greater than a year ago. Feeders finished with moderate gains, supported by the live cattle market and weaker tone in grain market. The feeder chart saw a technical breakdown yesterday, and prices consolidated within yesterday’s trade. The Feeder Cattle Index traded 0.20 lower to 174.98. The cash index is currently under the Nov futures, which may limit the upside in the front month contract with expiration on Thursday. Charts and trade are choppy going into the end of the week. With cash developing, the focus may be towards positioning for the report on Friday.

LEAN HOG HIGHLIGHTS: Lean hog futures were mixed to mostly higher on Wednesday as prices were looking for some directions. Dec hogs gained 0.250 at 85.575 and Feb was 0.275 higher to 90.350.

February hogs kept the short-term up trend pushing to a higher high than Wednesday as buying support is looking to challenge resistance at 92.00. Retail values where softer at midday, following a difficult close in the retail market on Wednesday. This limited the upside overall on the market today. At midday, pork carcasses traded 1.12 lower to 94.58, nearly $4.00 off yesterday’s midday high. The load count was moderate 185 loads. The Pork Carcass Index was gaining .13 to 96.00. The retail market was looking optimistic that prices may have been looking for a seasonal bottom, but today price action still has the market searching. Weekly export sales will be reported on Thursday, and the hog market will be watch-and-see if the demand can pick up, especially with the thought China is looking to possibly import more pork overall. Direct cash trade was higher on Wednesday, gaining 1.07. The direct trade averaged 85.52, and a 5-day rolling average of 84.66. The Lean Hog Index was softer, losing 0.12 to 88.53. The cash index holds a 2.9550 premium to the futures, which could provide support for the front month contract. Prices are trying to push back to the upside, and strong price action today should lead to additional strength. The fundamentals are still the key, especially if retail values can find a seasonal bottom.

DAIRY HIGHLIGHTS: The December 2022 class III milk contract has been soaring higher over the past few weeks. Since bottoming on October 28 at $18.53, the contract has jumped $3.47 to today’s high up at $22.00 per hundredweight. The rally in December milk has been impressive and has occurred for a number of reasons. First, leading into the move the market had been oversold as the contract went from about $21.50 to $18.50 in a short period of time. Additionally, there has been a strong resurgence of buying demand in the spot trade that has brought optimism back to milk futures. Spot cheese is up at $2.1425/lb while spot butter is back up to near $3.00/lb. This rally in the spot trade may be a late season Holiday rally before Thanksgiving. By the close of the day, December class III settled at $21.92 while December class IV settled at $22.30. The rest of the market was fairly mixed on Wednesday for dairy.