Export sales of U.S. corn to Canada are at all-time highs. While the corn market is closely watching the sales of corn overseas, and wondering if China will return to being an aggressive buyer again this marketing year, sales of corn to Canada are extreme. Export sales are at multi-year highs to start the marketing year. The strong sales pace to our neighbor to the north is a direct reflection of the difficult growing season seen last summer, and the demand for feed needs in Canada. The sales totals typically don’t show up in weekly export sales, but the number will need to be accounted for down the road. This corn is moved via rail, and typically not in weekly inspection totals. While the numbers may not be equal to overseas shipments, the jump in Canadian sales will help support the marketing year export totals. 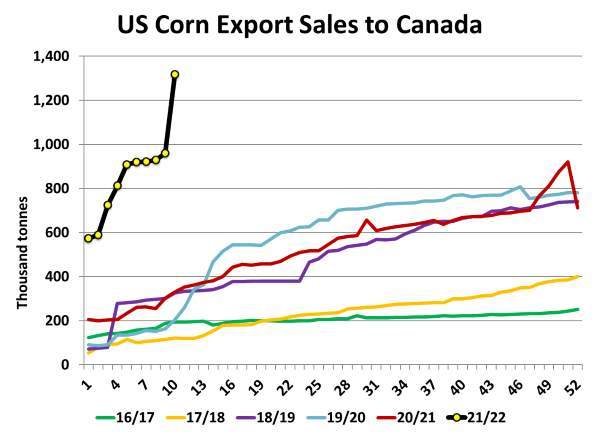 CORN HIGHLIGHTS: Corn futures showed strength earlier in the day but slumped to end the session. December lost 2-1/4 cents, closing at 5.73. Hitting short-term resistance and without much news to push it higher, corn closed in the red.

The USDA reported an increase of 35.6 million bushels of corn export sales, but this is behind the pace needed to meet their estimate, and corn export commitments are still down 6% from last year. Yesterday corn was considered a follower of soybeans, and the same could be said today, as both commodities went from firm to flimsy. Adding to the bearish tone today, the International Grains Council raised world corn production by 2 mmt. In the Southern Hemisphere, Brazil is reported to have their corn crop 86% planted vs 83% average and weather there has been favorable so far. Argentina on the other hand is turning drier. U.S. weather saw some snow today in the northern Midwest, with rains to the south and east. In a longer-term forecast, La Nina could bring dryness to the northern Plains next spring and summer.  While bullish news for corn today has been scarce, ethanol margins should help support the market. Current ethanol production suggests that the USDA may be 100 mb too low for their corn usage numbers. The weekly production report showed an increase of 21,000 barrels per day, and holiday travel will likely increase demand.

SOYBEAN HIGHLIGHTS: Soybean futures had a strong rally today, with double-digit gains. Jan settled 25-3/4 cents higher at 12.77. What seemingly drove the market today was fund buying due to concern over South American weather.

This morning there was a reported sale of U.S. soybeans to China in the amount of 132,000 metric tons. While not a huge sale, it seemed to excite the market, as China has been absent as of late. China’s purchases of U.S. soybeans are down 34% from last year, so this sale was an encouraging sign. Additionally, a sale of 30,000 metric tons of U.S. soybean oil to India also lent support to the marketplace. Technical buying also seemed to be key today as soybeans breached the 200-day moving average, as well as the 100-day in some contracts. The main driver, however, seems to be managed fund buying on concern over inflation, as well as South American weather. Conditions in that part of the world have been mostly favorable, however, a strengthening La Nina pattern could bring dryness. Another factor lending support to the soybean market was the higher close in meal and oil with favorable crush margins. In other news, there were rumors yesterday that the Biden Administration is considering boycotting the Winter Olympics, which will be held in China. This could be bearish for the grain markets as the political relationship between the two countries has not been great as of late.

All wheat markets opened up strong this morning, as the market resumed trading at 8:30 a.m. CT, however, that excitement was short-lived as markets quickly retraced by mid-morning. U.S. exports last week were not anything to be excited over, coming in at 14.7 mb, with shipments at 11.4 mb – fell under USDA’s projected need of 18.3 mb weekly average needed to reach 860 mb. Wheat is moving, just not from the U.S. – tenders mainly from Russia & Romania. It is discouraging that Russia can still garnish wheat even with their export tax going up again, however, not shocking. Even with their taxes, Russian wheat continues to be a discount to U.S. wheat. The current tax in Russia is $77/mt and is expected to increase again by the end of the week to potentially $80/mt. U.S. weather is still supportive, as areas of the HRW Belt still is extremely dry with no real relief in sight anytime soon. Canada is still projecting the Canadian wheat area rising by 6% in the coming year – not entirely a surprise as much of Canada’s production was curbed by weather/drought last year.