It has been a difficult week in the crude oil market as prices have fallen to their lowest levels since the fall lows. Going into the end of the session on Friday, the January contract was trading over $8.00 lower and touched over a $10.00 loss on the week before some end-of-week profit taking. Demand concern is the biggest factor pressuring the crude oil market, and most of that concern is tied to China and its economy. Chinese economy is still dealing with COVID cases and their strong policy in controlling COVID. Optimism came recently with some weakening on the Chinese COVID Zero policy, but cases have been on the rise recently, and that has the energy as well as other markets tied to Chinese demand cautious. The crude oil market is heavily oversold and could be setting up for a technical bounce on short covering. The supply side of the crude oil balance sheet is still a concern, and any news that might trigger an improved demand projection could set this market up for a strong price recovery off these levels. 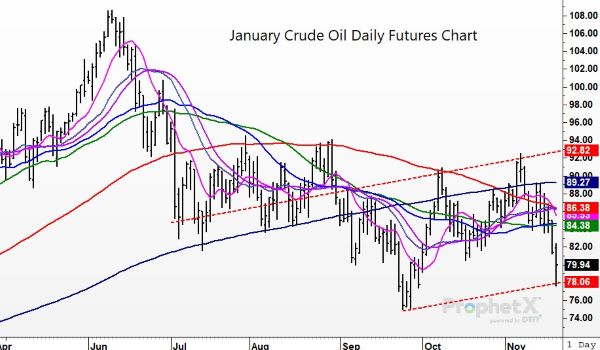 CORN HIGHLIGHTS: Corn futures traded quietly today but ended the day slightly higher. There wasn’t much news to go on today, but yesterday’s export sales, Mexico’s huge purchase, and demand for ethanol were bullish factors throughout the week. Dec corn gained 1/4 cent to end the session at 6.67-3/4, and March gained 1 cent at 6.70. On the week, Dec corn gained 9-3/4 cents.

Corn traded only marginally higher today but gained on the week with a big source of momentum coming from yesterday’s export sales report which showed 46 mb shipped last week with 36 mb of that going to Mexico. In addition, Mexico purchased a massive 1,866,900 mt of corn on Wednesday with 1,242,060 mt for delivery in the 22/23 marketing year and the rest for 23/23. This sale will be included in next week’s export sales, which will ensure that those numbers are strong as well. Wednesday’s inventory report from the Energy Department had ethanol production lower last week, but was still above one million barrels per day. The drop in inventory to 21.3 million barrels was the lowest this year. Bearish factors are Brazil’s potentially record crop and their export advantage over the US which shows their prices 12% below comparable US prices. In Argentina, forecasts remain relatively dry, and planting has been slower as a result and only 24% completed. Chinese demand for US corn has been slow, and January corn on the Dalian exchange closed at its lowest price in over a month at the equivalent of $10.04 a bushel. National basis has held firm, and Dec corn remains in a sideways to slightly lower trend but managed a close above the 100-day moving average today.

The soy complex finished the week on a good note despite losses earlier in the week. Soybeans were lower on the week, bean meal 3.0 higher, and bean oil the biggest percentage loser, dropping 4.23 this week in the Dec contract. The huge loss in crude oil this week was behind much of the bearish pressure losing 8.70 per barrel and putting a lot of negative pressure on bean oil and other veg oil markets. The recent highs in bean oil have recently been the source of support for beans creating large crush margins that had processors excitedly buying cash beans, but these margins have slipped with lower bean oil. While a bit lower, crush margins are still profitable, and based off the January futures show crushed beans exceeding the cost of beans by 3.49 a bushel. The biggest positive factor in the bean market this week was the massive number reported in yesterday’s export sales report at 111.3 mb of soybeans for last week, the fourth largest on record for any week on the calendar. Total soybean export commitments are now at 1.322 billion bushels for 22/23, up 4% from a year ago. Brazilian production remains a threat with their crop being planted in very favorable conditions, but it is still early and forecasts show a drier turn next week for southern Brazil and Argentina. Jan beans remain rangebound to slightly lower but closed above the 100-day moving average again which is acting as support.

For the second straight day, wheat prices stayed under pressure but tested key support levels of $8.00 for Dec and $8.20 for March, and those levels help on the day. Price action overall is still negative, and the possibility of testing longer term trendline support is still in the cards at $7.80 under the December contract. The International Grain Council lowered its global estimate for wheat production to 791 MMT down 1 MMT from last month, siting weather concerns in some wheat growing regions. The USDA is in line with a production drop, but the IGC projected global wheat production would exceed demand by 7 MMT. This is counter the projection by the USDA feeling global supplies would not meet demand. There are still pockets of production that are struggling, The U.S. winter wheat crop is not good, and Australia has wetness concerns and Argentina keeps lowering its forecast projections. Regardless, the lack of interest in the wheat market limits any near-term rallies as prices try to build a floor. Managed Money continues to build a short position in the wheat market, the largest since 2020.

The cattle market looked to the Cattle on Feed report on Friday after the market close. Expectations were for the cattle supply to reflect continued tightening, and the report helped confirm those prospects. Total cattle on Feed were at 11.706 million head or 98% of last year. Feedlots are holding 240,000 head less than last year’s October report. This was slightly below expectations. Placements were at 94% of last year versus expectations of 96.4% as total placements of 2.108 million head was the lowest October number on record since data was kept starting in 1996. Marketings was 101% and slightly above expectations. The low placement number is bullish and should help support deferred contracts on Monday. A strong cash market tone helped push prices higher. Cash trade was wrapped up for the week with a firmer tone. Southern trade was reported at $151-152, which was higher than early week trade. The Northern trade was $154, also firmer than early week’s totals. Retail values were mixed at midday, as choice carcasses lost 2.39 to 254.71, but select trade added 0.67 to 232.41 on light movement of 96 midday loads. As of midday, choice carcasses were nearly $4.00 off Monday’s close. Feeders finished with moderate gains, supported by the live cattle market and weaker to quiet tone in grain market. Traders may have been anticipating a reduced placement number. Feeders closed the week with a technically improved chart and the supportive Placement numbers may be poised to move higher. The Feeder Cattle Index traded 0.41 higher to 175.39. Strong couple of days for the cattle market fueled by the strength in cash and price optimism going into the Cattle on Feed report. The tighter cattle supply was confirmed, and the friendly numbers should support the market on the open next week.

LEAN HOG HIGHLIGHTS: Lean hog futures were lower to end the week as the soft tone in the retail market and concerns regarding the Chinese economy pressured prices. Dec hogs slipped 0.750 at 84.225, but Feb was 1.250 to 89.550. For the week, Dec hogs were 0.125 lower and February gained 1.150 as the spread from Dec to February widened.

February hogs saw some end of week profit taking, falling back to support at the 10 and 20-day moving averages. The short-term trend in Feb hogs is working higher overall, with $92.00 as resistance over top. Next week will be key for near-term price direction as February assumes a large volume of trade with December starting to move close to expiration in less than a month. Buying strength supporting February hogs is reflecting the possible improved demand and tighter hog numbers as the market moves into late winter. The Dec contract is still pressured by fundamental weakness. Retail values where firmer at midday. Pork carcasses traded 2.42 higher to 95.05, as prices that trended lower this week found a little recovery on Friday. The load count was improved at 219 loads. The Pork Carcass Index was softer, losing 0.72 to 95.21. The index traded 0.61 cents lower on the week. The retail market was looking optimistic that prices may have been looking for a seasonal bottom, but this week’s price action still has the market searching. Direct cash trade was lower on Friday, losing 1.36. The direct trade averaged 81.76, and a 5-day rolling average of 83.87. The Lean Hog Index was softer, losing 0.08 to 88.14 and was down 0.82 on the week. The cash index holds a 3.9150 premium to the futures, which could provide support for the front month contract, but the trend shows the cash market dropping to meet the futures.