USDA reported a strong week of beef export sales on Thursday morning. New net sales of 25,500 MT for 2021 were reported, up 23% from last week and 58% from the 4-week average. It was what was in those numbers that helped build some bullish enthusiasm. China was the largest buyer of U.S. beef last week at 13,751 mt or 30.3 million pounds. This was the highest ever to China and among the top 5 weekly sales to any country going back to 2014. Only 3 other sales historically were higher in that time window, and those were to Japan. The blip on the chart to Korea last year was an error and canceled the next week. What is most encouraging, has been the development of the Chinese market for U.S. beef overall. China has quickly gone from buying minimal amounts, to being one of the top buyers of U.S. beef overall. This trend will likely continue as the Chinese consumer has developed a taste for U.S. beef. 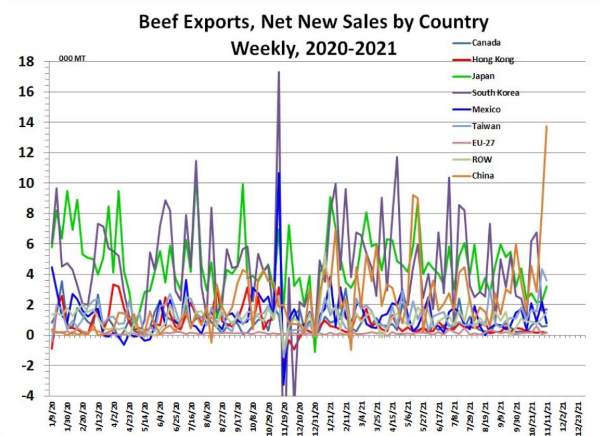 CORN HIGHLIGHTS: Corn futures had a two-sided trade today but ended the session with minor losses. Dec was down 2-1/4 cents, closing at 5.70-3/4. As the market tries to figure out a direction, prices may remain sideways.

Corn seems to be stuck in a sideways trading range. Some may argue that a pennant formation can be seen on the charts, which may indicate the market is due for a break to the upside. Technical indicators do not drive the market on their own, however. Other than support from good ethanol margins and demand, the bullish news for corn has been lacking recently. Looking longer-term, the expectation for higher fertilizer and input costs for next season’s corn crop may be lending support. On a bearish note, lower crude today has been pressuring the market. It was also reported yesterday that the EPA will delay the announcement of biofuel blending mandates. The U.S. weather forecast looks mostly favorable as the last of harvest wraps up. In Argentina, the Buenos Aires Grain Exchange said 29% of their corn crop was planted which is behind the usual pace, but 91% was rated good to excellent.

SOYBEAN HIGHLIGHTS: Soybean futures traded on both sides of steady but closed the session with a loss of a penny or two. Jan was down 2 cents at 12.63-1/4. The market needs news to find direction, and that seemed to be lacking today.

As South America’s planting progress continues with few issues so far, the big question will be surrounding La Nina and what impact it will have on the market. A two-sided trade today, despite mostly bearish news recently, seems to indicate that there is underlying support in the soybean market. Part of this may come from the fact that crush margins are very strong and support exists around the 12.50 level. Yesterday it was reported that the EPA was delaying biofuel blending mandates, which also adds to the bearish tone. Soybean oil saw losses today as crude turned lower and pressured the market. Soybean export commitments are still down 32% from a year earlier, with sales to China specifically, down 34% from last year. Jan soybeans on China’s Dalian exchange are around the equivalent of 17.90 per bushel. Looking to the Southern Hemisphere, Brazil’s soybean crop is projected at a record 5.29 billion bushels. In Argentina, the Buenos Aires Grain Exchange reported that 29% of their soybeans were planted, which is down 2% from the average.

WHEAT HIGHLIGHTS: Anyone who thought wheat’s failure to put in contract highs yesterday meant that the top was in for the wheat market, was disappointed in today’s trade. Dec Chicago gained 3 cents closing at 8.23, but not before putting in a new contract high at 8.30-3/4. Similarly, KC wheat closed 7-1/2 higher at 8.34-3/4 and set a new contract high of 8.39-3/4.

The U.S. and world wheat supplies are just too tight to keep the market down right now and that situation doesn’t look to be going anywhere anytime soon. That’s not to say these price rallies should not be rewarded, prices are at levels not seen in 7 years. This is hardly the time to sit on your hands, but a perfect opportunity to sell high.  Purchase calls if concerned or wait and buy calls on a correction that’s bound to surface at some point. A big concern for KC markets continues to be crop conditions as the southwestern Plains are battling drought, with no relief on the horizon. Combined with fears of what La Nina may bring this year, that situation could easily just get worse. Globally, Argentina’s wheat harvest is 18% complete and is right on pace with their average pace. Russia is 93% harvested, with 76.7 mmt collected thus far. It was hopeful that a record Australian crop could help fill in some gaps this year, however, unforeseen rains continue to slow harvest & diminish the quality of the crop.