The USDA Cattle on Feed report on Friday confirmed what the market thought and did bring some surprises.  The cattle market was anticipating seeing tighter cattle supplies, as total cattle on feed as of November 1 was 98% of last year, and just slightly below expectations.  At 11.7 million head, feed lots are looking at 240,000 head under last year.  The placement number was the surprise at 94% of last year and well below expectations and approximately 130 million less placed vs last year.  This number was the lowest October placement total on record, since the start of the report in 1996.  The low placement total is a direct reflection of the declining cattle population influenced by drought conditions hitting pastures in cattle country and high prices of inputs.  Regardless, the cattle supply looks extremely tight going into and throughout the next year.  At this point, the trend in the cattle herd size is still declining and that will likely be the trend for early 2023 or later. 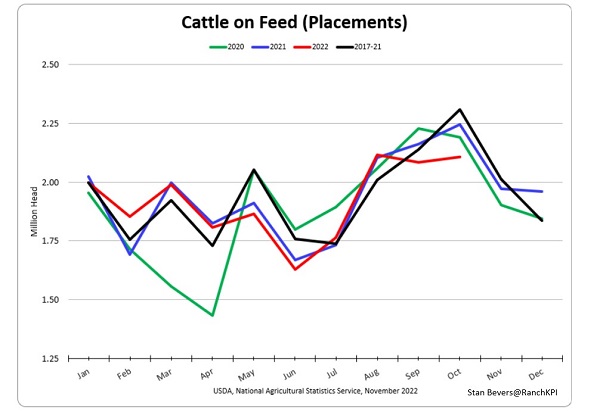 CORN HIGHLIGHTS: Corn futures closed lower today as a jump in the US Dollar Index caused funds to continue selling. This holiday week will see lighter volume and more volatility in price moves as traders are on vacation. Friday’s Cattle on Feed report was also a bit bearish for corn. Dec corn lost 8-1/4 cents to end the session at 6.59-1/2, and March lost 6-1/2 cents at 6.63-1/2.

This week is likely to be a volatile one with lower volume, and it started off with a decline in corn prices. Non-commercials were sellers last week of 60,831 contracts decreasing their net long position to 176,831 contracts. The fund selling continued today and was mostly sparked by the higher dollar and Friday’s Cattle on Feed report, which was slightly bearish for corn. The on feed number came in at 11.71 million head, which was 2% less than a year ago, and caused some concern about feed demand. This morning’s inspections report showed 19.5 million bushels of corn inspected for export last week, which is nearly the same as last week, and showed that the majority of corn went down the Mississippi River, which is still dealing with traffic, but has had its water levels rise a bit. Total inspections for 22/23 are now down 30% from a year ago. Brazilian corn is now roughly 11% cheaper than US corn, and there have been rumors of China buying up to 15 cargoes of Brazilian corn last week for delivery in Dec. Today’s sharp drop and then recovery of crude oil put pressure on ethanol and corn prices. March corn remains in a sideways trading range and closed below the 100-day moving average, but above the 200-day.

SOYBEAN HIGHLIGHTS: Soybean futures closed surprisingly higher today, along with both meal and bean oil, despite an extremely sharp drop in crude oil, which was followed by a recovery. Export inspections were bullish for beans today, which contributed to the higher prices. Jan soybeans gained 8-1/2 cents to end the session at 14.36-3/4, and March gained 8-1/2 cents at 14.41-3/4.

The soy complex began about 11 cents lower, but ended up making a recovery with all three products closing higher thanks to a friendly export inspections report. The day began with an apparent announcement that Saudi Arabia and other OPEC members were discussing a plan to increase oil production by 500,000 barrels, which brought crude oil crashing down nearly 5 dollars a barrel, but a few hours later, Saudi Arabia claimed that this was false and crude prices began to recover. Shortly after that, news came out that Russia may cut their oil output due to a price cap, which caused crude to close just shy of positive. This sell-off and reversal in crude allowed the soy complex to trade the bullish export inspections from last week. The USDA said that 85.6 mb of beans were inspected for export last week, with the majority headed for China and leaving about every US port available. About half of last week’s inspected beans traveled down the Mississippi, which has seen an increase in water levels, but are still low. Total soybean inspections are down 11% from a year ago. Friday’s CFTC report showed non-commercials as sellers of 10,943 contracts, which reduced their net long position to 92,965 contracts. Crush margins have slipped, but remain profitable, so between strong domestic demand and hopefully continued strength in export demand, prices should at least hold steady, but Brazil’s crop remains a bearish threat.

Managed money is still growing its short position in the wheat market as they are short 46,000 SRW contracts, the largest short position in wheat going back to June 2020. That downward push weighs on wheat futures that closed below key support at 8.00 on Dec and 8.20 on Feb futures. The weak close opens the door for further downside tests. The U.S. Dollar Index was stronger to start the week, which limits wheat’s upside on the day. The stronger dollar looks like a correction in a down market, so the trend may be longer-term friendly.  With the funds being short, this sets the market up for some bullish price recovery, but the wheat market is missing that trigger at this time.  Demand news saw a decent week of export inspections at 280,000 MT.  This was at the top end of expectations, but U. S. wheat export demand is still overall sluggish fueled by the stronger dollar and the price of wheat globally. The market may be getting set up for some potential upside rally, but the trigger is just not there yet at this time as the market looks to find a significant low.

Friday’s cattle on feed numbers showed cattle placements at 94% of last year, well below market expectations, and total cattle on feed at 98% of last year, confirming the shrinking cattle supply picture. In addition, managed money has been liquidating cattle positions, holding a net short feeder cattle position, and being long only 50,000 live cattle contracts, giving the market plenty of room for long potential.  Given the numbers and the market positioning, prices gapped higher on the open, triggering short covering and establishing new contract highs in some deferred live cattle positions.  The technical picture and price action is strong and will likely support the market in the near term.    Cash trade was undeveloped to start the week.  With the holiday trade this week, the cash development will be closely watched.  Prices firmed slightly last week, and expectation are for steady to firmer again this week.  Retail values were mixed at midday, as choice carcasses losing .25 to 254.52, but select trade added 1.14 to 233.97 on light movement of 68 midday loads. Beef retail values have a tendency to peak around the Thanksgiving holiday, and that trend could limit upside gain.  At this point, there is still good value in retail beef to support cash prices. Feeder cattle took that low placement number and weak grain to close with triple digit gains. The Feeder Cattle Index traded 0.03 lower to 175.36. Bullish cattle on feed numbers helps support the market.  The strong trading session opens the doors for additional gains as cattle markets look to be trending higher.

LEAN HOG HIGHLIGHTS: Lean hog futures were mixed to mostly lower as fundamental concerns pressured the Dec hog contract, but supply optimism supported the deferred market. Dec hogs slipped 0.425 at 83.800, but Feb was up 0.600 to 90.150.

Dec hogs stay tied to the cash market and softer retail carcass tone as prices fail to find any footing in the past few sessions. Meanwhile, deferred contracts are still finding a bid, supported by the prospects of tighter hog supplies and strong buying tone in the cattle complex on Monday. The short-term trend in Feb hogs is working higher overall, with $92.00 as resistance over top. Feb hogs have now traded higher 5 out of the past 6 sessions. Buying strength supporting Feb hogs is reflecting the possible improved demand and tighter hog numbers as the market moves into late winter. Retail values were firmer at midday. Pork carcasses traded 0.56 higher to 94.00 after a difficult close on Friday, keeping selling active in the front end of the market. The load count was moderate at 210 loads. The Pork Carcass Index was softer, losing 0.72 to 94.43. The retail market was looking optimistic that prices may have been looking for a seasonal bottom. Direct cash trade was lower on Monday, losing 0.01. The direct trade averaged 81.75, and a 5-day rolling average of 83.56. The Lean Hog Index was softer, losing 0.37 to 87.77. The cash index holds a 3.970 premium to the futures, which could provide support for the front month contract, but the trend shows the cash market dropping to meet the futures as the Dec futures is more in line with the direct trade. The Dec-Feb spread has exploded wider recently reflecting weak fundamental versus optimism for the longer term.

DAIRY HIGHLIGHTS: Class III milk futures closed down double digits to begin the week with the second month December contract at $21.25, 75 cents off last week’s high. Clearly, resistance at $22.00 remains in place on the continuous second month chart. Spot cheese was lower again as blocks continue to push ahead of barrels, throwing that market off kilter in the opposite direction it was last month. Meanwhile, Class IV futures were unchanged to lower despite a 9 cent jump in spot butter. This negative bias may continue through the holiday week as today’s October Milk Production report showed a 1.20% increase YoY.