The rally in crude oil has hit a point to consolidate and see some possible profit taking. The front month crude oil futures traded lower to end last, the first negative week in trade in the last 10 weeks. As of Wednesday, selling pressure has continued as Dec crude oil futures has lost approximately $2.50 a barrel this week. Crude oil inventories rose for the second consecutive week on the Energy Information Administration report, gaining 3.3 million barrels for the week ending October 29. The gain was larger than expected and brought some long liquidation to the market, at one time trading over $3.00 lower/barrel on Wednesday. The key technical figure will be last week’s low of $80.58, which was tested today. A break of that level would give the market a technical sell signal and see additional long liquidation. 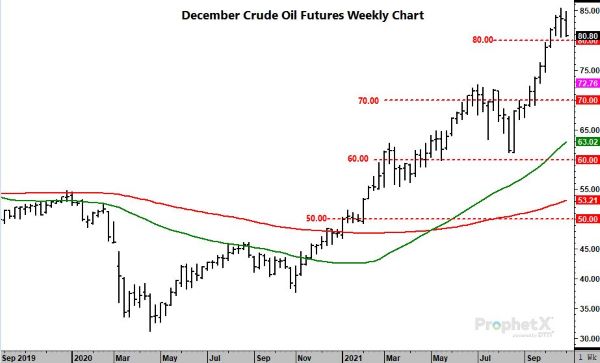 CORN HIGHLIGHTS: Corn futures slid for the second day in a row after posting a hook reversal on charts yesterday. A sell signal was also noted from stochastics, which may have pressured prices, as did a 3.00 drop in crude oil. Farmer selling has also picked up the last two sessions after December rallied just under 80 cents. December futures closed 9 cents lower at 5.64, and December 2022 lost 4-3/4 to finish at 5.46-1/4.

Mostly favorable weather this week will allow for field work to move along. Wet weather for parts of the Midwest next week will again slow harvest, especially in parts of the eastern corn belt where some areas have waterlogged fields. Attention as of late has focused on strong ethanol margins and suggestions that total corn used for ethanol in the year ahead could increase to more than 5.4 bb, or an increase of 200 mb from current forecasts. The big picture perspective suggests that, on November 9 when the next WASDE report is released, an increase in expected yield, no change to exports or feed, and an increase in ethanol will leave carryout near unchanged. Corn used for ethanol last week was 112 mb, well above the 99 mb to meet the current yearly estimate of total bushels used.

SOYBEAN HIGHLIGHTS: Soybean futures followed sharply lower crude oil prices and finished with losses of 10 to 12-1/2 cents. Weaker corn and wheat prices were noted as well. Soybean oil lost over 90 points as traders were selling oil and buying soymeal, which finished firmer by 0.80 to 2.90.

For the better part of two weeks, soybean futures have been consolidating awaiting further news to provide direction. Stronger energy prices and tight supplies of world vegetable oil prices suggest the market is well supported. Yet, end user buying continues to be sparse with no new export sales announced again today. Ultimately the USDA is likely to pull back on export sales expectations. This could raise carryout, as could the expectations for yield to be increased near 1/2 to 1 bushel an acre. Rain in August seemed to benefit the crop greatly, turning around declining crop conditions and perhaps adding bushels.

It is no secret that the grain markets struggled today, with corn, soybeans, and wheat all settling in the red. Even oats, which have been on a recent strong uptrend had double digit losses today. It seems what the wheat market may have experienced today was general selling pressure that developed as longs exited positions. From the Dec Chi wheat low on Oct 13 at 7.12-3/4 we have seen a rally of nearly a dollar with a high yesterday of 8.07. Paris milling wheat futures also set back today after yesterday’s all-time high, which is about the equivalent of $9.36 per bushel. In fact, yesterday all three US wheats made contract highs but could not hold the gains into the close of that session and could not recover today. Technically, each of the three contracts is considered overbought and due for a correction, which we may be seeing now. This does not dissuade from the bullish fundamentals and fact that many buyers need wheat. This week Ethiopia, Japan, and Pakistan are all tendering. Monday’s 45% good to excellent winter wheat crop rating can also be considered bullish as it is the third lowest for this time of year since 2010. It was also noted today that the Federal Reserve had the second day of the FOMC meeting and it was reported that they will keep rates unchanged and will begin tapering this month.