The strength on Brazil corn exports has the market worried that U.S. demand will need to see further downward adjustments. The latest USDA report brought a 75 mb drop to export demand for U.S. supplies, as Brazilian corn exports have been running at a record pace. Private analysts estimate that Brazil will export approximately 6.7 MMT for the month of December. If realized, this would be an all-time high for corn exports out of Brazil. In fact, it would mark the 5th straight month of setting new records for Brazil corn exports. Brazil exports have been boosted by the strong price for U.S. corn and the increase in China’s demand from Brazil for bushels. Regardless, the U.S. has some work to do to reach current USDA targets for yearly exports. It is highly likely the market will see further revisions to the USDA export forecast for corn. 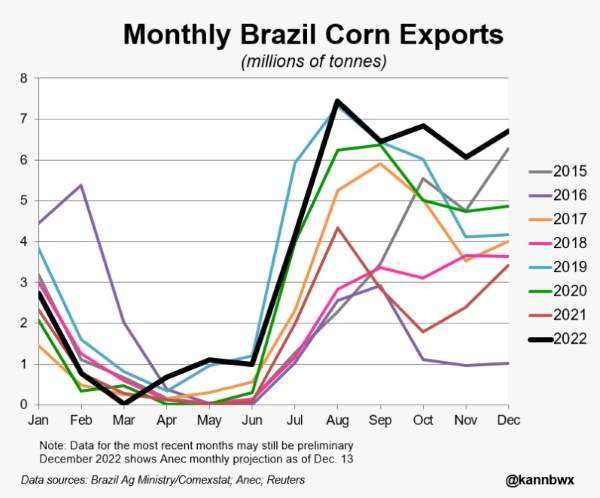 CORN HIGHLIGHTS: Corn futures edged higher today on improved export sales and firmer wheat prices. Spread traders may have been selling soybeans and buying corn and wheat. A plunge in the stock market after a substantial rally the past six weeks might suggest money could move back to commodities and may have provided some support today. Mar futures gained 3 cents to close at 6.53-1/2 and Dec 2023 added 1-3/4 to end the session at 5.98.

Export sales at 37.8 mb were termed neutral but did show an increase above the four-week average. Still missing is a round of strong robust sales for multiple weeks to help suggest the USDA estimate of 2.075 bb can be reached. Year-to-date sales total, 787.5 mb, is well below the pace of last year when 1.516 billion bushels were on the books at this same time. In the 2020/21 marketing year, 2.417 bb were sold and the year prior, 2.747. South America is adding sales. This is not great for U.S. corn prices when competition is so strong, yet it also suggests that if weather is not exactly right for Brazil and Argentina (the number 2 or 3 exporters in the world) then U.S. prices may rebound quickly.  The bottom line, it boils down to a weather market in both hemispheres over the next eight to nine months. If not wanting to bet on weather, then consider steadily selling cash into the mid-winter months.

SOYBEAN HIGHLIGHTS: Soybean futures closed lower today despite huge export sales numbers, while meal fell and bean oil moved higher despite lower crude oil. The bearish concern is Brazil’s bean crop and when China will begin purchasing from Brazil in place of the U.S. Jan soybeans lost 8-3/4 cents to end the session at 14.73-1/2, and Mar lost 8-1/4 cents at 14.76-3/4.

Today’s export sales report was likely already priced into the market because when the impressive numbers were released, prices fell right away. U.S. soybean export sales totaled 108.1 mb with sales to China and unknown destinations making up 78% of the total. Total soy commitments are 1.536 billion bushels and are 4% higher than a year ago. While trade may have just been looking for a higher export number, it is also possible that markets are anticipating the upcoming completion of Brazil’s bean harvest and the lull in U.S. export business it will bring as China turns to Brazil’s cheaper soybeans. In the meantime, any weather scare in South America could inflate U.S. prices. The NOPA crush report was not as supportive, as was anticipated, at 179.2 mb crushed compared to 181.5 mb expected and 179.5 mb a year ago. This isn’t too surprising as crush margins have slipped from their record highs but remain profitable for processors. So far this week has been partially influenced by outside markets after bullish CPI data was released that showed inflation slowing, but a negative reaction to Jerome Powell announcing another 50-point basis hike and a signal of more to follow. These announcements have caused high volatility in the stock market, the U.S. dollar, and crude oil. The trend for Mar beans remains higher despite today’s losses, and the 15-dollar level is still the key area to watch.

Today’s wheat trade was two-sided, with Chi and KC posting modest gains and MPLS contracts up slightly. Paris milling wheat futures, however, fell again to below 300 euros for the first time since March. On the bearish side of things, Algeria has reportedly purchased 500,000 mt of wheat – but most of that is thought to come from the Black Sea. Russia continues to undercut the U.S. in terms of exports. Their FOB wheat is reportedly about $65 per metric ton cheaper than U.S. HRW wheat. There was bullish news today though – the Rosario Grain Exchange reduced their estimate of the Argentina wheat crop by 300,000 mt to 11.5 mmt. This is a reflection of their drought conditions and is about 9 mmt below estimates in the early season. Export sales data also showed an improvement this week, with the USDA reporting an increase of 17.2 mb of wheat export sales for 22/23. While still not a stellar number, it is an improvement from last week’s 7 mb. Weather is also on the minds of traders. Below-freezing temperatures are expected to hit the U.S. southern plains and bring with them the threat of winterkill.

Follow through on the weak price action set up yesterday as the front-end charts posted a weak technical signal. Adding to the pressure, equity markets saw aggressive selling on Thursday and the spill over correlation to the cattle markets helped bring the selling forward for the session. The cash market started to build on Thursday with southern deals starting at $155, mostly steady with last week. In the north, dress trade was registering at $248, which notched a couple dollars higher than last week’s totals. Retail values have been extremely volatile this week, as prices caught a bid at midday today. Choice carcasses gained 3.03 to 253.10 and select added 0.95 to 227.64. The load count was light at 57 loads. Today’s slaughter totaled 122,000 head, 4,000 below last week, but even with a year ago, as cattle numbers are likely to trend lower into 2023. Weekly export sales reported this morning saw a new net sale for last week at 10,900 MT for 2022, and 2,900 MT for 2023.  South Korea, Japan, and Mexico were the top buyer of U.S. beef last week. Exports totaled 16,500 MT on the week last week. Jan feeders are tied to the Cash Index and were pressured by strength in the corn and wheat markets. The Feeder Cash Index was 0.04 lower to 179.51. The index is still at a discount to the Jan board, which could be a limiting factor. The direction overall in the cattle markets is higher and the market looks well supported. A tight supply picture and firm overall demand tone will likely keep the market climbing higher into 2023. In the near term, keep an eye on the outside markets for some potential influence on cattle prices into the end of the year.

LEAN HOG HIGHLIGHTS: Lean hog futures traded modestly to strongly lower as the front-end contract saw triple-digit losses. Pressure in outside markets and a difficult close in the retail markets added to the selling pressure on Thursday. Feb hogs, the new lead month, traded 1.750 lower to 81.650, and Apr hogs lost 1.550 to 89.175.

The Feb contract saw difficult price action on the day as the market quickly removed the premium of the Feb futures to the expiring Dec futures and the Cash Index. The Lean Hog Cash Index traded 0.06 higher to 81.68. The index entered the day with a small discount to the Feb futures, but this was removed during the session. The direct cash market was 0.57 lower to 80.58 and a 5-day rolling average of 81.63. The weak print in the cash market will keep the upside limited in the near term in the Feb hog futures. Retail values were higher at midday, gaining 4.07 to 88.34. The load count was moderate at 153 loads. Weekly export sales were much improved this week compared to last week’s negative print. New net sales of 14,400 mt and 7,700 MT for 2023 were reported. Exports were strong at 34,200 MT of pork. The top buyers of U.S. pork on the week were Mexico, China, and Japan. It has been a disappointing couple of days in the hog market and prices are challenging the recent lows from last week. The key will still be the fundamentals, which for the most part, are still struggling to support the market.

DAIRY HIGHLIGHTS: Milk futures were mainly higher on Thursday as January contracts for Class III and Class IV were up 12 and 16 cents, respectively. Milk futures appear range bound as front month contracts for Class III continue to bounce between 19 and 20 dollars, while Class IV trends between 20 and 22 dollars. Most of this range bound activity likely stems from lack of fundamental news and a choppy spot trade in dairy products. Spot cheese and butter have seen recent volatility but large moves in one direction seem to countered by similar moves in the opposite direction in the following days. The price difference between blocks and barrels has fluctuated mightily over the last month, from a $3.44/lb premium on blocks on 10/28 to slight premium on barrels on 11/9, back near a $2 premium on 11/29, and settling today at a 63 cent premium for blocks. Spot butter has traded as low as $2.68/lb in the last week but settled today just over $2.80/lb.