The equity markets had a difficult week with strong selling pressure.  After the announcement by the Fed Reserve of raising interest rate .5% higher, the market proceeded to sell off aggressively.  The rate hike was expected and likely priced into the market, but the tone of the Fed’s comments are what triggered the selling pressure.  The Fed has stayed firm on its stance to keep raising interest rates in order to help control inflation back to their 2% annual inflation rate target.  This will likely mean the ongoing use of rate hikes well into 2023.  The tightening monetary policy triggered the profit taking in the equity markets as the expectations are for slower growth and potentially reduced corporate earning going forward.  Part of the selling has been technical in nature as prices tumbled through key support levels.  Weekly charts are reflecting a large bearish reversal, which could be signaling a trend change in the equity futures as prices are trading nearly 2,000 points off the high for the week. 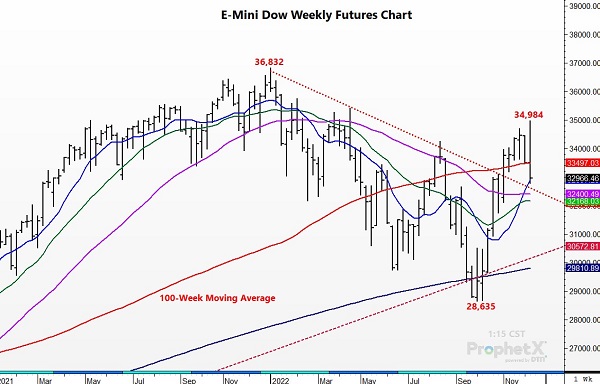 CORN HIGHLIGHTS: Corn futures have seemingly moved into a “holiday type trading atmosphere” with a small trading range today on lighter volume. While not unusual for this time of year, it tells us the trade is not overly concerned about a slow start to the planting season for Argentine corn (45% planted verses near 70% on average) nor the relatively poor conditions for the corn that is emerged at only 18%. March finished 0-1/2 cent lower at 6.53 and finished the week 9 cents higher. December new cop lost 0-1/2 to end the session at 5.97-1/2 but up 4-1/2 cents for the week.

Have corn futures turned the corner? After all, futures did finish positive for the week, export sales were more active, and Argentina’s crop is late and poorly rated due to dry weather. The answer is maybe but probably not. Concerns that future reductions to exports and a technical trend that has turned lower (a series of lower highs and lower low prices) suggest this week’s trade was little more than a bounce. Bulls, however, might suggest otherwise. Prices are high historically and a price setback late fall/early winter of near 10% in value is expected. Prices are holding in recent weeks suggesting buying interest is developing yet if weather is South America is generally good, the bears may win this battle. High levels of covid in China this week are not viewed as favorable for corn prices.

SOYBEAN HIGHLIGHTS: Soybean futures gained 6-1/2 to 7-1/4 cents on demand and dry weather concerns in parts of Argentina and Brazil. On the session, January futures added 6-1/2 cents to end at 14.80. For the week January lost 3-3/4 cents. Last week however, futures gained 45-1/4 cents, so this week’s setback is minor and confirms consolidation near term and strength since January futures bottomed in October at 13.62-1/4. November futures closed 1 cent higher on the session at 13.98-1/4. For the week, November lost 9-1/4 cents. Slightly negative was the monthly crush at 179.2 mb, down from expectations of 181.5 mb. A positive weekly hook reversal in the soybean oil futures this week suggests downside pressure is easing.

Soymeal continues to trade near contract highs which are also the highest prices for the year, establish last week. Dry weather in Argentina, the worlds leading exporter of soymeal has traders on the offensive buying U.S. meal and soybeans. Short covering in recent weeks has been a feature. Overhead resistance on both the January and March futures is 15.00. Charts suggest a move to over 15.50 in January based on an ascending triangle pattern, if futures can close over 15.00, a major resistance point. All focus with be on South American weather and crop conditions, Secondarily and not necessarily less important is how the export market reacts to weather conditions in South America. It is too early to draw conclusions to how both Argentina and Brazil crops will fair, however a less than ideal start in Argentina and southern Brazil is concerning. A big sales figure of over 100 mb last week is encouraging for U.S. prices.

Despite the sharp losses in KC wheat, the March contract still finished 11 cents higher for the week. Mar Chi was also higher for the week, with a 19-1/4 cent gain. However, today, the threat of winterkill for the HRW crop doesn’t seem to be much on the minds of traders. Very cold temperatures are expected in the US southern Plains with little to no snow cover in areas. The fact that there was more bombing last night in Ukraine also did not seem to affect the trade today. The Wall Street Journal reported that 76 missiles were fired by Russia on Friday, though Ukraine may have shot down 60 of them. And to speak plainly, Ukraine’s winter wheat plantings are said to be down 40% from last year but only time will tell what their situation looks like in spring. Traders may also be looking at Paris milling wheat futures, which are almost equal to Russian prices and at levels not seen since the war began. The slow US export pace is still an issue, being undercut by Black Sea offers. There is talk though, that Russian exports may be delayed due to poor weather, slow inspections, and insurers no longer offering war risk for vessels. In the southern hemisphere, Argentina’s wheat crop is said to be 54% harvested but their production was recently reduced to 11.5 mmt by the Rosario Grain Exchange due to the drought they have faced.

December cattle posted a contract high close on Friday as buyers stepped back into the cattle market, despite ongoing selling pressure in outside markets.  Cash bids firmed during the course of the week, and the potential impacts of a strong winter storm and cold temperature over the next week likely aided the livestock market.  In addition, strong buying in the hog market spilled over to support live cattle.  The cash market this week saw prices firm into the end of the week.  Most southern trade was done at $155, steady to slightly lower than last week’s total, but northern dress trade saw business at $248, a $1 higher, and $156, also trending higher.  Packers will be active looking for cattle next week, but the Christmas holiday may limit some trade.  Cash markets will be watching the weather across cattle country as the northern plains are still seeing blizzard conditions, which will be followed by extremely cod temperature.  The difficult winter weather could limit cattle movement and possible weight gains. Retail values have been extremely volatile this week, as prices caught a bid at midday today. Choice carcasses gained 6.58 to 260.88 and select added 5.99 to 234.50. The load count was light at 49 loads. Today’s slaughter totaled 122,000 head, 4,000 below last week, but even with a year ago, as cattle numbers are likely to trend lower into 2023. Feeder cattle were supported by the strong tone in the live cattle market and weaker grain markets in general. Jan feeders are tied to the Cash Index and were pressured by strength in the corn and wheat markets. The Feeder Cash Index was 0.01 higher to 179.52. The index is still at a discount to the Jan board, which could be a limiting factor. The direction overall in the cattle markets is higher and the market looks well supported. Even with the holiday coming into play, the weather and demand for cattle should keep the cash market supported.

LEAN HOG HIGHLIGHTS: Lean hog futures recovered aggressively to end the week as prices finished with strong triple digit gains, fueled by technical buying and the prospects of tightening hog supplies. Feb hogs touch limit higher during the session before closing 4.125 higher to 85.775 and Apr hogs added 3.550 to 92.775.  For the week, Feb hogs traded 1.775 higher and April added 1.725, with most of those gains coming during the session on Friday.

The Feb contract saw short covering, erasing this week’s early loses as the market is looking towards the Quarterly hogs and pigs report in January.  Expectations are for a tighter hog supply to continue, and the market, given the demand, was undervalued.  In addition, a strong winter storm has been impacting the plains with snow and wind.  This is to be followed by extremely cold temperatures which could affect hog movement and weight gains.  In fundamentals, the direct cash market was 0.64 lower to 79.94 and a 5-day rolling average of 81.04. The weak print in the cash market will keep the upside limited in the near term in the Feb hog futures, especially after today’s rally.  Retail values were higher at midday, gaining 2.50 to 87.99. The load count was light at 132 loads. Despite the early week volatility in retail prices, the trend is still lower in the boxed pork trade. It was a disappointing couple of days in the hog market as prices challenged the recent lows from last week, but Friday brought a change with a strong buying spree.  This may signal a turn, but more importantly letting the market know that the recent lows need to be bought given the potential hog supply picture going into 2023. The key will still be the fundamentals, which for the most part, are still struggling to support the market and may limit longer trend rallies.

DAIRY HIGHLIGHTS: Since peaking in November at $21.04, the January 2023 class III milk futures contract has fallen $1.80 over the past few weeks. Over that stretch, the market has closed red five weeks in a row. Pressure for dairy stems from a shaky spot cheese trade, consistently lower powder prices, and a softening corn trade. 2023 class III contracts still remain at elevated levels, in a range between $19.10 and $20.59, but that range has fallen $1 to $2 in the past couple months. The market will see a busy week of new data next week and the oversold nature of the market could create a turnaround on positive news. There is a US milk production report on Monday, a Global Dairy Trade auction on Tuesday, and a US cold storage report on Thursday. The milk production report from October had US production up 1.40% year-over-year and cow numbers up 42,000 head from a year ago. The market will watch to see how cow numbers look, because since May cow numbers have been mostly flat. The Global Dairy  Trade will be watched closely with the GDT in the midst of a two-event upswing. The market will watch to see if buyers will continue to support higher global dairy prices.