The USDA Quarterly Hogs and Pigs report reflected what the market expected, which is a tight front end hog supply. The number of market hogs as of December 1 was estimated at 66.96 million head, which is down 2% or approximately 1.355 million head from last year. This puts the December inventory for market hogs at its lowest point since 2017. The tight supply picture helped push February hogs to strong gains on Tuesday’s trade. The tight December numbers will have a ripple effect through the first half of 2023 as weekly slaughter estimates will be impacted by the tighter numbers. The demand domestically and on the export market for pork has been very good, and the tighter supply picture should keep pork carcass prices supported, in turn, helping support cash markets. The Hogs and Pigs report did show some growth in the breeding stock side of the report, which could help improve the tighter hogs supplies later in the year, but in the near term, prices should stay well supported. 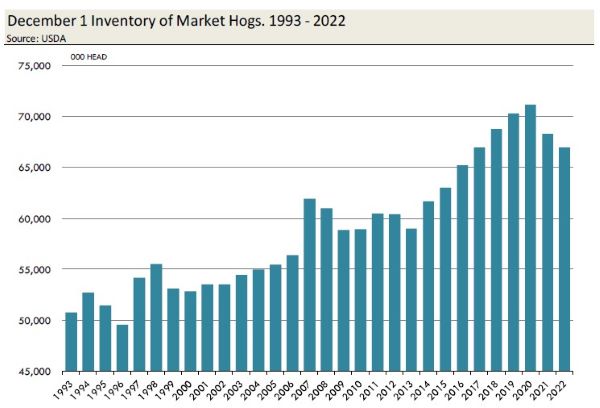 CORN HIGHLIGHTS: Corn futures looked very strong again today, gaining 8-0 cents in March to end the session at 6.82-3/4, its highest close since the first week of November. December added 4-3/4 to end the session at 6.11-3/4. It appears the market is taking more stock in dry conditions and late planting in Brazil. Higher soybeans (best close since June 22) and firmer wheat provided support as well. Violation of overhead resistance at the 200-day moving average has technical traders likely exiting short or buying new. Whatever the case, today’s close was impressive.

March futures have closed firmer in five of the last six sessions, adding 30-3/4 cents from the low established on December 19. The rally has occurred despite export sales at 48% of year ago at this same time. Argentina, a net exporter of corn, could experience reduced supply availability if drier weather persists as the planting window is closing quickly. Parts of Argentina are said to be experiencing the worst drought in 40 years. Likely supporting prices was a lack of farmer selling into low prices prior to mid-December and several days were moving corn was difficult due to cold temperatures and snowfall. The question now is whether prices can move back toward 7.00 or higher. And inverted chart formation (head and shoulders) suggests a move to just under 7.00. It will, however, likely take additional concern for southern Hemisphere corn production, stronger exports, or both to sustain the current upswing in prices.

SOYBEAN HIGHLIGHTS: Soybean futures closed sharply higher today and managed to close above 15 dollars in Jan since the beginning of June. The continued dryness in Argentina along with China dropping their zero-Covid policy has allowed prices to rally. Jan soybeans gained 24-1/4 cents to end the session at 15.06-1/2, and Mar gained 25-1/4 cents at 15.14-1/4.

Soybeans closed at their highest levels since early June, while bean meal closed to levels just off its contract highs as the Argentine drought has shown no signs of relief. Export demand has been strong, and crush margins remain historically high, keeping domestic demand firm. Argentina previously had rain forecasted through today and tomorrow, but forecasts changed, and very little rain fell. Temperatures are nearing 100 degrees. In China, Covid cases are on the rise, but they are still dropping many restrictive policies and lifting quarantine restrictions for travelers on January 8, all of which should have a positive effect on demand. Soybean oil was dragged lower by lower crude today, but meal is holding strong and is now competitive with South American meal. Export commitments are now up 4% vs last year, and total soy inspections last week were 64 mb, but shipments have been lagging a bit. The bearish concern is Brazil’s likely record crop that they will begin harvesting soon and will be traveling to China most likely in place of the US beans that have been being supplied. Jan beans closed at the top of their Bollinger Band but were unable to take out yesterday’s high. Overall, the trend remains higher.

Chicago wheat showed some strength today with a close near the daily highs. Kansas City wheat, while still posting gains, was not quite as close to its highs. Minneapolis wheat also had small gains, with the exception of March, which was down 1/4 cent to 9.34. Strength in the Chi contract may have stemmed from higher corn and sharply higher soybeans. There was not much new in the headlines today pertaining to the wheat market, but Ukraine continues to be pummeled with Russian drones and missiles. This is despite Russia apparently claiming they are ready for peace negotiations. In general, Russia continues to undercut US exports, as their falling Ruble has cheapened their wheat compared to the US. Egypt and Romania have reportedly made purchases from Russia recently. There is also talk that Russia may be intentionally blocking (or at least delaying) Ukraine exports at Black Sea ports. Here in the US, temperatures should be warmer than last week, but the southern Plains look to remain mostly dry. As a final item of note, Australia is beginning their record wheat harvest, but a significant portion of the crop could still be downgraded to feed quality.

CATTLE HIGHLIGHTS: Live cattle ended mixed today with Dec higher but Feb and beyond bear spread, and feeders surprisingly higher despite the rally in corn. The jumps lately in boxed beef have been very supportive to prices and feeder cattle remain sparse. Dec cattle gained 0.625 to 157.450, and Feb cattle lost 0.075 to 157.800. In feeders, January feeders gained 0.375 to 183.475.

The cattle complex began the day trading lower in both fats and feeders but reversed for a higher close in both despite the rally in corn, which would typically put pressure on feeder cattle. After cash cattle gained a dollar last week, trade is now looking for signals to where cash may end up this week. Asking prices are around 158 or more in the South and up to 256 in the North which would be higher than last week if met. The rally in boxed beef has been extremely supportive and should encourage packers to run faster chain speeds while prices are high, which could push them into buying cattle more aggressively in the cash market. Feeders were higher in the hopes of better cash despite an 8-cent rally in corn, but sideways trade will likely continue until the new year when sale barns resume their normal schedules and demand for feeders picks up. Looking forward, a continuation of higher corn prices could put a damper on feeders as cost of gains will be affected even more than it already has. Feb live cattle are just off their contract highs and are technically overbought, while Jan feeders remain rangebound but still above all moving averages.

After such a strong move in the February contract yesterday, there was likely a round of profit taking during today’s trade. Additionally, with the hogs and pigs report now old news, traders are grasping for something new to hold onto. From a technical picture, Feb hogs have a difficult time staying above the 92-dollar level. Additionally, with the index at 78.60, there is a large discrepancy between it and futures. This may limit upside movement. The Commitment of Traders report also showed funds selling 2,920 contracts to bring their net long to 34,762. Looking at fundamentals, the report did indicate lower hog supplies in 2023 but that may be somewhat already factored into the market.

DAIRY HIGHLIGHTS: A quiet spot session kept dairy futures under pressure on Wednesday as both cheese and butter held steady on no loads traded. The dairy trade was able to bounce yesterday, but there was no continuation overnight and the market gave back those gains. With milk futures in a short term downtrend, lower highs and lower lows could be expected. The market needs a catalyst to bring new buyers into the trade. Strong exports are supportive, and so is the rising feed trade. On Wednesday alone, corn added 8c and soybean meal added nearly $15.00 per ton. However, seasonally the market is in a lull period and demand could be in question. It has been reported in the Midwest that milk is widely available and cheese plant managers say they are taking some loads of milk at discounts as low as $10 below Class. Cheese demand notes are softening in the region. January class III fell 22c to $19.61 on Wednesday while January class IV fell 18c to $19.57.