The USDA released the WASDE report on Friday morning, and the grain markets were closely watched to see how the USDA would handle the perceived lack of demand in the corn market. With export sales very lackluster and trailing expectations, the USDA made a 75-million-bushel reduction to corn export demand on the report. With the new projection, the USDA feels the U.S. will export 2.075 billion bushels in the 2022-23 marketing year. This is down nearly 400 million bushels from the last marketing year. Even with this demand adjustment, further adjustments may still be likely unless export business finds some footing. The U.S. is still dealing with a competitive disadvantage in price compared to other global competition for export business. Though corn carryout projections are still well below last year’s levels overall, the prospect of the corn pile growing is likely given the concerns regarding the demand tone as future adjustments may be necessary. 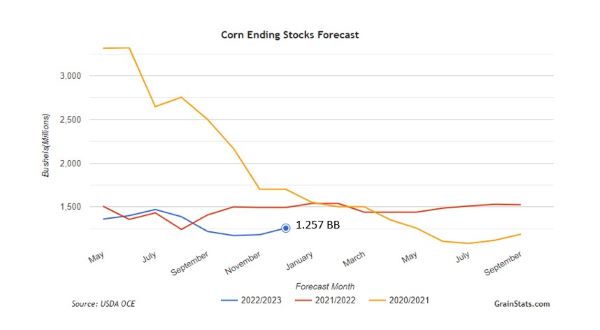 CORN HIGHLIGHTS: Corn futures finished mixed and without much fanfare despite a USDA WASDE report today. Nearby December added 2-3/4 to end the session at 6.34-3/4. March gained 1-1/2 to close at 6.44, and December 2023 lost 1-1/2 to end the session at 5.93. As anticipated, the export sales expectations for the 2022/2023 marketing year were reduced by 75 mb resulting in an increase to carryout by the same amount, now forecasted at 1.257 bb. The market was expecting an increase to 1.241 bb. In the end, the report was termed mostly neutral for the U.S. numbers.

On a positive note, prices did close firmer despite wheat losing 10 to 12 cents and soybeans down 2. World projected carryout for the 2021/2022 marketing year is forecasted at 307.1 mmt, down 0.6 mmt from last month. There was also a reduction in the 2022/2023 projected carry out from 300.8 mmt to 298.4 mmt. For the week, March corn lost 2-1/4 cents and December 2023 gave up 5. Positive news is lacking; however, recent rains in parts of the Midwest will help movement of grain on the Mississippi. The La Nina pattern that is keeping Argentina dry, as well as southern Brazilian states, is expected to dissipate through December into January and suggests less drought stress in dry areas and more reliable precipitation for Brazilian crops. A positive development this week is the U.S. and Mexico aligning on what will be at least a year lag in Mexico implementing a non-GMO import policy.

SOYBEAN HIGHLIGHTS: Soybean futures closed slightly lower today following a neutral WASDE report and a dip in crude oil. Overall, beans had a good week with good exports and worries over the drought in Argentina. Jan soybeans lost 2-1/2 cents to end the session at 14.83-3/4, and Mar lost 2 cents at 14.88-1/4. For the week, Jan beans gained 45-1/4.

Today’s highlight was the USDA supply and demand report which turned out to be slightly bearish after an overall bullish week with solid exports and Argentina’s drought causing supply concern. The USDA’s estimate of world soybean stocks increased a bit from 102.17 mmt to 102.71 mmt and was slightly more than expected. Estimates for Brazil and Argentina were unchanged at 152.0 mmt and 49.5 mmt respectively. Brazil’s crop conditions have been excellent in the Northern and Central regions with slight dryness in the South, and extreme drought in Argentina. Chinese purchases of US soybeans have been a main factor in keeping prices elevated and once Brazil’s new crop is ready, China will likely turn their sights on Brazil’s record crop and cheaper soybeans and US prices may be pressured. So far, Chinese purchases are up 10% from a year ago as their demand remains stout, and Jan beans on the Dalian exchange continue to climb and were up 0.9% today at the equivalent of $20.24 a bushel and near the 6 month highs. Bean meal closed higher while bean oil continued to slip with lower crude. Jan beans remain in their upward trend above all moving averages and closing at the top of their Bollinger Band. The contract is very close to being overbought and resistance is near the 15-dollar level.

Today, traders were anticipating a report with no major changes, and that is exactly what they got. The report overall was about as neutral as can be. The USDA left US wheat carryout unchanged at 571 mb, while the world number was decreased just slightly to 267.3 mmt (from 267.8 mmt last month). US wheat exports were also left unchanged at 775 mb. Exports for both Russia and Ukraine were increased; however, Russia increased 1 mmt to 43 mmt and Ukraine was pegged at 12.5 mmt versus 11 mmt last month. In the southern Hemisphere, production was reduced in Argentina by 3 mmt but partially offset by the increase in Australia of 2.1 mmt. Despite a report that was basically middle of the road, wheat prices sagged into the close. This may be in part due to the weather forecast, which puts broad precipitation in the southern plains next week. Additionally, there has been a scarcity of fresh bullish news for wheat. It may need a catalyst in the form of friendly headlines before the trend turns upward.

Live cattle pushed higher as cash bids continued to improve this week. Friday cash trade saw business getting done at $155-156, which is $1-2 higher than early week trade and steady to $1 higher than last week. In the North, most business was completed at $247, down $1 from last week. The firming cash tone was encouraging in the face of mixed to weaker retail values but still signals the markets need to find cattle. Today’s slaughter totaled 120,000 head, 3,000 less than both a week and year ago. Saturday’s kill is estimated at 24,000 head, bringing the weekly total to 652,000 head, 11,000 below the prior week, and 30,000 under 2021. Tighter cattle numbers may be the path going into 2023, which should keep the market supported into next year. Retail values were firmer at midday with Choice gaining 0.66 to 247.94 and Select carcasses adding 0.71 to 221.26. Retail values were softer than last week but found some support off lows in the middle of the week. Feeder cattle followed the trend high, led by the live cattle gains. Choppy trade in the corn market in front of the USDA Supply and Demand report likely kept buyers on the sidelines in feeders with the uncertainty for grain prices. The Feeder Cash Index was 0.01 lower to 179.22 and was 0.19 higher on the week. The index is still at a discount to the January board, which could be a limiting factor. The direction overall in the cattle markets is high, and good money flow this week looks to keep that direction in place going into next week.

LEAN HOG HIGHLIGHTS: Lean hog futures prices were mixed as the concern regarding retail values and cash markets kept the sellers active in the front end of the market. Dec hogs lost 0.425 to 81.575, and Feb hogs lost 0.700 to 84.000. For the week, Dec hogs were 0.850 lower and Feb hogs dropped an aggressive 6.425.

The volatility stays high in the Feb hog contract with a second consecutive week of large price moves during the week. Overall trade on Friday was consolidative, as prices stayed within yesterday’s range but still at the lows for the week. The chart structure looks weak and could lead to additional selling pressure to start next week with support at yesterday’s lows. Demand stays a concern as the market is still working through comfortable pork supplies. Weekly slaughter this week was estimated 2.432 million head, not counting Saturday kill, this was down 20,000 from last week, but 90,000 more than last year. The heavy slaughter numbers have limited the cash market. Direct cash trade at midday was 1.52 higher to a disappointing 82.51, and a 5-day rolling average at 83.75. December hogs are tied to the cash index with expiration on 12/14, which traded 0.31 lower to 82.47. Retail values were strong at midday, gaining 6.13 to 91.10. The load count was light at 153 loads. The hog market is volatile and Feb prices tested the bottom of the range during the session today. Prices may be falling into a trading range until the end of the year but holding the recent lows next week will be key. The large slaughter numbers will still limit near-term upside.

DAIRY HIGHLIGHTS: For nearly all of the dairy market, this week concluded in losses. Both Class III and Class IV futures lost value in the first half of 2023, with January contracts in both classes down for the fourth straight week. The spot markets were all lower besides cheese, which gained just over 2 cents per pound, while powder, butter, and whey were all in the red. Butter was extremely volatile this week with a 20-cent drop in the spot market Thursday and a 12.75 cent recovery in Friday’s trade. Volume in both cheese and butter spot markets was good this week with 21 and 18 loads traded, respectively. Regional butter reports have shown production and demand as steady, while inventories continue to be well short of recent history and regional cheese reports show similar sentiment for production and demand but large inventories continue for cheese. Opportunity maintains for US dairy products shown in this week’s reporting of October Dairy Exports and Global Dairy Trade event. It will be a quiet week for fundamentals coming up with no reports on the release docket.