New old crop soybean exports sales since the start of the year have been on a record pace. USDA weekly export sales reported another strong week of old crops sales at 2.2 MMT of new sales on the books for last week. This has moved cumulative sales of old crop soybeans to a total of 10.6 MMT since the start of 2022, a record for that time window. This strength in sales is atypical for this time window, but with the South American soybean crop limited due to drought conditions, importers have been aggressively looking to lock in supplies. Only 2019 was near this level of sales with 9.5 mmt during the same time window. Overall, total sales for the 2021-22 marketing year are at 52.4 mmt or 92% of the newly raised USDA target for the marketing year. 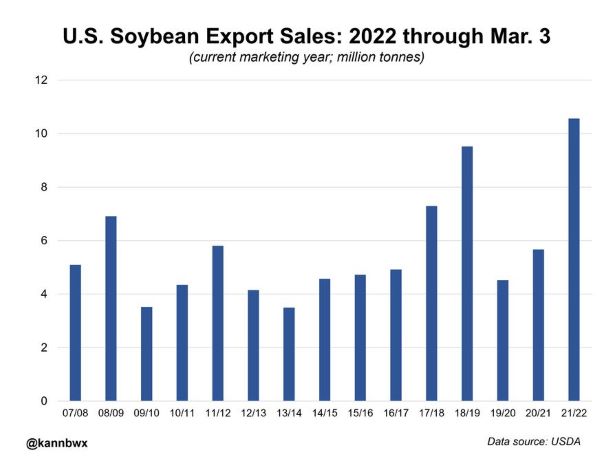 The strength in corn market saw buying support after yesterday’s USDA report, cutting U.S corn carryout to 1.440 billion bushels and a strong demand tone in export sales. A strong sell-off in the crude oil market limited the market reaction to the USDA report on Wednesday. That pressure was aside the market today, and the buyers stepped in. USDA release weekly export sales this morning, and new sales for the 2021-22 marketing year totaled 2.143 MMT (84.4 mb), a marketing year high, and above expectations. In addition, export shipments improved 14% from the prior 4-week average as the export pace is picking up. China was the top destination for U.S. corn, taking shipments on 21.9 million bushels. The Rosario Grain Exchange reduced its estimates for the 2021-22 corn crop to 1.878 billion bushels as the country has struggled with drought. The ongoing Russia-Ukraine war still keeps logistics and availability of bushels from that region on the sidelines, making world importers more anxious to lock in available supplies. Russia announced a temporary suspension of fertilizer exports in an attempt to limit food price issues. The biggest issue is to potential input cost for global producers, which may have been an underlying support in corn markets on Thursday.

SOYBEAN HIGHLIGHTS: Soybean futures had decent gains today. Yesterday’s WASDE report was neutral to friendly for beans. Strong export sales today were beneficial to price. May gained 14-1/2 cents, closing at 16.86-1/4. November was up 18-1/2 cents, ending the session at 14.92-1/4.

Today’s export sales report showed an increase of 81.0 mb of soybean export sales for 21/22 as well as an increase of 32.9 mb for 22/23 – strong numbers indeed. On yesterday’s WASDE, the USDA also increased US soybean exports by 40 mb to 2.090 bb, but some private analysts feel this could be strongly underestimated by as much as 100 mb. Also, in regard to the Supply and Demand report, some analysts suggest that the USDA might still be anywhere from 6-10 mmt too high on the combined soybean production estimates of Brazil and Argentina. While the weather seems to be improving somewhat in that region of the world, significant damage has been done. China has been an active buyer of US beans, as they are currently the cheapest world offer. Though beaching 17 dollars on the May contract today, that is an area of resistance; support however is coming from strong vegetable oil markets. Additionally, with bans on Russian oil, there should be (in theory) increased biofuel demand.

It is possible that some war premium is being taken out of the market with continued talks Russia and Ukraine along with Europeans demanding a ceasefire. This may just be hearsay, however, as it appears that Russian troops continue to shell civilian areas, and it sounds like President Putin still wants control of Ukraine. In other words, not a lot has changed on that front. Though we have mentioned it before, it bears repeating that Russia and Ukraine account for roughly 30% of world wheat exports. And with Black Sea ports closed, there may be as much as 15 mmt of wheat that won’t get shipped out of that region; this is not an insignificant number. In other news, the USDA reported an increase of 11.3 mb of wheat export sales for 21/22. This leaves total sales at 683 mb, which is down 23% from last year. Additionally, the continued drought pattern in the US plains offers a bullish backdrop for wheat prices.

April cattle followed through on the selling pressure from Thursday’s close, as the hope of price consolidation faded. With the weak price action today, live cattle futures look to be targeting a re-test of last week’s low. Very light cash trade was noted on Thursday with some clean up trade occurring. Most of the trade is likely done for the week. Most trade was at $138, down $2.00 from last week and disappointing to the market. Demand concerns are still a focus of the market, but the market may be getting some hope. Retail values caught a bid at midday on Thursday, (Choice: +1.32 to 254.02, Select: +2.42 to 247.21) with demand light at 69 midday loads. Weekly exports sales reflected an improved demand tone. Posted new sales for last week were at 27,500 Mt, a marketing year high. China, Japan, and South Korea were the top buyers of U.S. beef last week. The corn market traded strongly higher, triggering some long liquidation in the feeder market. This trend is likely to hold as grain markets are seeing strong money flow. Feeder prices can find some footing against strong grain markets, but it will be up to the live cattle market to bring the support. The Feeder Cattle Cash Index was 0.83 lower to 153.86. With a price gap lower and a contract low close, the feeder market may be challenge to reverse course into the end of the week.

LEAN HOG HIGHLIGHTS: Hog futures finished mixed to mostly higher except for the front end of the market, as the premium to cash and weak export sales limited gains. Apr hogs were 1.050 to 100.100, but Jun hogs were 0.975 higher to 114.900.

The price pressure on April hogs continued today, as prices are testing the 40-day moving average under the April chart. This level held on the last test, but with the weak price action, price may be poised to pushed lower. Summer months are looking to break through the top side with the 20-day moving average as resistance over top. After technicals, market fundamentals want to support the market. Pork cutout values were softer at midday, losing 0.97 to 106.77, giving back some gains after Thursday’s strong close. Load count was moderate at 152.50 loads. Weekly export sales took a step back, with new sales totaling 25,400MT, down 40% from last week. Mexico, China and South Korea were the top buyers of pork last week. Cash has been supportive, but the National Direct morning direct trade was 0.42 lower to 101.56 from yesterday. Cash Lean Hog Index was 0.26 higher to 99.26. The April futures were trading at a 2.150 premium to the index going into today, and that limited gains in April. The hog market is trying to build a recovery but will likely consolidate first. The fundamentals will be key in support for this market as it has a lot of work to do to push through to the upside. The summer months are poised to make that move going into the end of the week.

DAIRY HIGHLIGHTS: Class III milk was lower today, with Q2 being hit the hardest as the second month April contract dropped 37 cents to $23.89. The two-day drop follows a four-session rally that totaled $1.50 for the April contract, so as of yet there is no major cause for concern but a further break could confirm a short-term top is in place. That is especially true if spot cheese falters, but the trade today was down just 0.75 cents to $2.15125/lb and remains at historically high levels, while spot whey was unchanged at $0.7575/lb for its fifth trading day in a row. After giving the market some time, we will revisit our hedging targets next week.