Global tensions have brought strong money flow into metal futures, as gold is looking to challenge all-time high prices. On Monday, gold futures broke through the $2000.00/ ounce level, with only the highs from 2020 above the market. Influenced by COVID trade in August of 2020, gold futures traded to 2063.00, an all-time high. The ongoing military action in the Ukraine along with concerns for the global economy and inflation has brought strong money flow and the flight to safety into the gold market. Since the prospect of this military action was on the table, gold prices have been rallying, gaining over $200.00/ounce since the February lows. Overhead resistance has been minimal as prices have steadily climbed higher. The 2020 target looks to be the next stop, and with multiple commodities pushing to new highs on this move, gold looks to be soon joining that group. 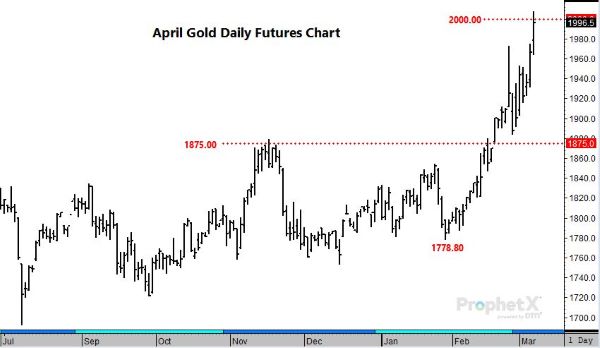 CORN HIGHLIGHTS: Corn futures finished mixed with May futures losing 3-1/2 cents, July gaining 6 and December adding 13 to close the session at 6.42-3/4 after reaching a daily and contract high of 6.50. May closed at 7.50-3/4. Chaos in Ukraine continues to be the driving force, as crude oil made new highs and wheat closed limit higher on May Chicago, closing at 12.94. Export inspections at 62.3 mb were supportive.

May corn futures reached a high of 7.80 before turning weaker. Crude oil prices were trading more than 10.00 higher on the overnight trade but plunged near 6:30 this morning, likely carrying corn and other commodities with it. We wouldn’t be surprised to find out that farmers sold a significant number of bushels with price orders placed above last week’s high, and this to may have pressured prices during the morning hours. Regardless, the uncertainty with Ukraine and crop production is growing. It is challenging to imagine timely planting when the country is being abandoned. It looks like most of Ukraine’s corn crop is planted the second week of April and beyond. Weather in South America is generally conducive for the second crop corn though there is some concern of drier weather in the central and northern regions in Brazil that are starting to surface.

SOYBEAN HIGHLIGHTS: Soybean futures closed mixed with May losing 1 cent to close at 16.59-1/2 and November up 2-3/4 to end the session at 14.53. Both contracts finished well off their highs (May: 37-1/4 cents and November: 19-1/4 cents). Sharply higher crude oil prices tumbled early in the morning, dragging soybeans with them. Export inspections at 28 mb were supportive. Limit higher wheat prices and stronger soybean oil were viewed as reason for traders to buy beans. The US dollar continues to appreciate; this may be acting like a drag against higher prices. May beans topped eight sessions ago.

Announced export sales of 132,000 tons to China (half for this marketing year and half for 2022/2023) failed to generate much buying interest. Nonetheless, the soybean market appears well supported. It also appears that the decline to the southern Hemisphere crop has leveled out. Expect a tighter balance sheet on the USDA report Wednesday, when once again the WASDE report will evaluate southern Hemisphere production as well as make line-item adjustments to US supplies and demand. Expectations are for a tighter carryout and an increase in exports. Stronger wheat prices continue to provide support.

May Chi was up the expanded limit of 85 cents today as the crisis in Ukraine becomes more serious by the day. With reports of cell service out in major cities and a lack of food, water, and medication, there are hundreds of thousands (if not millions) of people trying to leave. Some reports suggest that Russia is allowing civilian evacuations from some key cities with a limited and temporary ceasefire. Paris milling wheat futures are still reacting strongly to war headlines as well. They at one point were over 56 Euros higher per metric ton. That is roughly the equivalent of $1.66 per bushel. In other wheat related news, inspections were pegged at 12.6 mb with total inspections now at 582 mb. Also, the US Dollar Index is high, above the 99-mark, but the factors in eastern Europe are outweighing the pressure there. Though not directly tied to wheat, the energy markets are also surging – April crude hit the $130 per barrel mark, and news reports suggest nation-wide gas prices above four dollars per gallon (or more). The market is also awaiting Wednesday’s USDA report – the drop in exports from the Black Sea region is imperative to price direction, but will the USDA factor this in? We will know soon. Looking at US weather, the persistent dry pattern in the southern Plains might also creep into the western Corn Belt, and this outlook is expected to continue through March.

After eight consecutive down days, the buyers stepped back into the cattle market. The moves higher started on Thursday, as value buyers stepped into the market. Prices were back challenging old support, which is now new resistance. The cash market was quiet to start the week, typical of Mondays. Cash trade was softer last week, and that is expected for this week as well. With cash in the 4138-140 window, futures were a discount, helping bring buying support. Demand concerns have pressured the market as consumer inflation and potential tighter consumer money flow could limit beef demand. This has pressured boxed beef values recently. Boxed beef was lower again overall last week. At midday, boxed beef prices were tried to gain traction, (choice: +0.49 to 254.82, select: +0.68 to 249.09) with demand light at 65 midday loads. The corn market was calmer on Monday and saw pressure in the front end of the market. The quieter tone helped support the feeder price recovery. The Feeder Cattle Cash Index was 0.82 lower to 155.37 and trading at a small premium to the futures market. The direction of the grain markets throughout the week will likely dictate the direction in the feeder cattle market. Value buying likely stepped into the market, slowing the recent move lower. Prices are still looking to establish a short-term low, as one day higher doesn’t necessarily mean a turn higher is here.

LEAN HOG HIGHLIGHTS: Hog futures tried to find some footing with strong retail values at midday, but the technical selling after Friday’s break lower kept the sellers in place. Apr hogs were 0.175 lower to 100.275 and Jun hogs were down 0.750 to 111.000.

The April chart broke a “bear flag” pattern on Friday, setting up the limit move lower to end the week.  Despite expanded limits on Monday, prices were choppy before settling lower. April hogs tested the 98.000 level and could be poised for further correction to the $96.000 the 50-day moving average. In market fundamentals, pork cutout values were firmer. At midday, pork carcasses gained 4.62 to 108.61. Load count was moderate at 178 loads. Cash has been supportive with the National Direct morning trade trending higher last week but was unreported today due to “confidentiality”. The 5-day rolling average was at 92.08, and the Cash Lean Hog Index was 0.13 lower to 99.57. The April futures lost the majority of premium to the cash market and is currently still holding a 0.7050 premium to the index, which could limit selling pressure. Technically, the hog market broke lower and is technically challenged for further downside correction. The fundamentals stay supportive overall, but the technical selling will likely drive the market.

DAIRY HIGHLIGHTS: Class III milk futures pushed steadily higher on light volume Monday as the commodity markets once again saw support across the board. The wheat market was limit up for the fifth day in a row, crude oil hit its highest level since 2008, most corn contracts finished green, and commodities in general remain in strong uptrends. The dairy trade received support from another dairy spot trade that saw the majority of products close higher. Cheese bidders have been aggressive the past few sessions as they push the block/barrel average further above the $2.00/lb barrier. Blocks added 1.25c on 3 loads traded to $2.1625/lb while barrels added 5.75c to $2.0275/lb on 7 loads traded. There is a lot of inventory moving hands up at these levels. The strong spot market trade and outside market support was enough to push second month milk to a close of $23.97 while May added 48c to $24.10. Several class III contracts broke through the $24 barrier in intraday trading.