After hitting 13-year highs, crude oil prices tumbled on Wednesday. Crude oil began the week pushing over $130 per barrel on concerns about available supply due to the Russia-Ukraine conflict. Price broke sharply lower on Wednesday and traded over 12% lower during the trading session. Rumors that OPEC nations were contemplating the possibility of releasing additional oil into the market quickly caused strong selling pressure in an overbought market. The April contract traded as low as 103.63 during the session, down over $20.00 from Tuesday’s close. The strong sell-off had ripple effects throughout the markets. Commodities saw selling pressure, and equity markets posted strong price recovery, as money flowed from one asset to another. The talk of boosted supplies is still in the rumor stage, but this still brings uncertainty to energy markets about the available supply the market could be seeing. 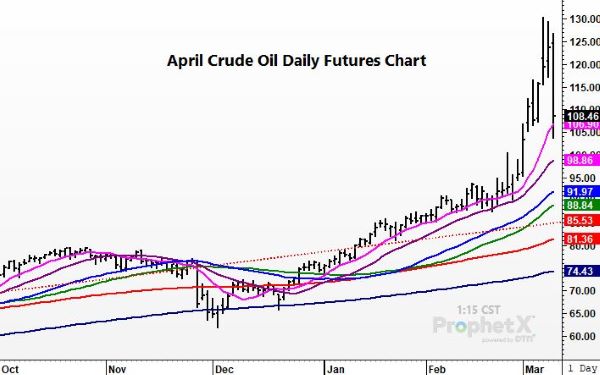 CORN HIGHLIGHTS: Corn futures followed sharply lower wheat and energy prices, finishing the session on a weak note. May lost 20 cents to close at 7.33, well off the high of 7.59-1/2. December gave up 7 to close at 6.36-3/4. The March WASDE report released at 11:00 didn’t lower South American production as the pre-report estimates suggested. Talk of OPEC countries increasing oil production pushed crude oil prices lower with futures giving up near 15.00 per barrel.

Argentina’s corn crop is now estimated at 53 mmt, down from last month’s 54 but above the pre-report estimate of 52. Today’s estimate for Brazil is 114 mmt, above the pre-report estimate of 112.9 mmt and the same as last month. US carryout is now estimated at 1.440 bb, down 100 mb from last month and slightly below the average estimate of 1.476. World ending stocks, however, came in at 301 mmt, above the average estimate of 299.6 yet below 302.2 from last month. Attention will now turn back to South American weather (still considered ok overall for second crop corn) and the war. Banning Russian oil helped to rally energy prices yet talk of more world production had traders exiting longs as well as the market likely tripping a significant number of stop orders to sell, exacerbating today’s decline. Ethanol increased 25 mb on today’s report and exports added 75, now at 2.5 bb.

SOYBEAN HIGHLIGHTS: Soybean futures finished mixed, losing 18 cents and closing at 16.71-3/4 after reaching a high of 17.34. November added 0-1/2 cent to end the session at 14.73-3/4. Bear spreading was a noted feature. The Argentina crop was lowered to 43.5 mmt on today’s WASDE report from last month’s figure of 45. Brazil’s figure came in at 127 mmt, below the average estimate of 128.2 and last month’s 134. A sharp drop in crude oil prices likely spilled over into the soybean pit. Limit lower wheat prices were not likely helpful either.

US carryout at 285 mb confirms snug supply, yet the market was expecting 270 mb. Recent strong and steady export sales could likely lead to a decline in projected carry out for US supplies on next month’s report. Attention will now focus on southern Hemisphere weather for harvest as well as export activity and developments with the Ukraine Russia war. Crude oil prices took a major drop today as OPEC countries were hinting they could increase production and make up for shortfall of Russian oil supplies, which the US has now banned. Our bias is supportive but again, 17.00 held as resistance. The big picture perspective continues this suggests precariously tight world supplies of vegetable oils. With limited supply either the world will need to see more energy production from OPEC producing countries, the US produce more oil, or likely the rationing of vegetable oils will continue.

Today’s WASDE report was released with little reaction from the markets. US wheat carryout was increased to 653 mb (from 648 last month). US exports were also decreased to 800 mb (from 810 in February). The USDA did address the war in Ukraine, lowering their wheat exports by 4 mmt. However, a few hours ahead of the report being published, Ukraine announced a ban on exports of several commodities, including wheat, corn, and sunflower oil to name a few. Russia is said to also be implementing a ban on exports of goods and raw materials. This could greatly affect fertilizer prices as they are the biggest exporter (especially to Europe). The US does have several major producers of fertilizer, but this could still affect the global supply and demand picture. It is worth noting that the US and UK are also banning Russian oil imports which will likely lead to higher fuel prices (in addition to what is already happening). It appears that world governments are getting nervous, with reports of Iraq planning to create a strategic wheat reserve of 110 mb and allotting 100 million dollars to do so. Putting all of these puzzle pieces together, it would seem that the trend for wheat (and the other grains) should remain up. With that said, the recent volatility is unprecedented, and the market could easily move in either direction.

April cattle failed to break resistance at the 10-day and 200-day moving average, as prices consolidate near the top of the range for the week. Prices may be looking to build a flag pattern but will need to hold in this trading range. April prices will need to push through the 140 level to add more buying strength. The cash market was still building on Wednesday with more completed trade at $138, down $2.00 from last week and steady with yesterday. This is disappointing and could be a limiting factor for live cattle prices for the April contract. Demand concerns are still a focus of the market as retail values had a disappointing close on Tuesday. At midday on Wednesday, boxed beef prices were mixed, (choice: +0.35 to 252.79, select: -0.46 to 248.48) with demand light at 104 midday loads. The grain market traded lower and that helped limit the selling pressure in Feeder cattle markets. The Feeder Cattle Cash Index was 0.22 lower to 153.89 with a small discount to the March feeder contract.

LEAN HOG HIGHLIGHTS: Hog futures consolidated, holding on to most of the gains from earlier this week. Prices are looking for direction overall, waiting for a better direction from cash and retail values. Apr hogs were 1.775 to 101.150, and Jun hogs were 0.750 lower to 113.925.

The April hogs failed to push through resistance at the 10-day moving average but traded close to the range from Tuesday, trying to build a consolidation pattern. There is a price gap on the April chart at 104.250, which could be a likely upside target, but prices are looking for some direction in the near-term. In market fundamentals, pork cutout values had a disappointing close on Tuesday afternoon, but at midday, pork carcasses were firm gaining 0.79 to 106.19. Load count was moderate at 129 loads. The key for additional price strength will be the afternoon close on the retail values. Cash has been supportive with the National Direct morning trade posting strong gains. Midday direct trade was 8.06 higher to 101.98 from yesterday. Cash Lean Hog Index was 0.28 lower to 99.00. The April futures are trading at a 2.150 premium to the index, which could limit near-term upside. The hog market is trying to build a recovery but will likely consolidate first. The fundamentals will be key in support for this market as it has a lot of work to do to push through to the upside.

DAIRY HIGHLIGHTS: The commodity markets ran into selling pressure on Wednesday as the fuel market fell over 10% on comments out of Iraq that they could increase oil output if needed. Additionally, the US wheat trade was limit-down at 85c lower, corn fell 20c, soybeans were down 18c, and most dairy products took a hit. Heading into today, the May Class III milk contract hadn’t posted a down day in seven sessions, so a correction was warranted. Nearby Class III was down anywhere from 15c to 40c with a strong drop of 15c in the front-month March contract to $22.54. The dairy spot trade was steady, so it looks like the selling pressure stemmed from a market-wide drop in commodities. In the spot trade, spot cheese was bid higher for the seventh day in a row, and spot butter gained for the third day in a row. Spot cheese is now up to $2.15875/lb as buyers have gotten aggressive over the $2.00/lb level.