Equity markets switched quickly into risk-off mode going into the end of the week. E-mini Dow futures were down sharply on Friday to end the week, but today was continuation of the move that started on Thursday afternoon. After peaking at a high of 35,913 on Thursday, Dow futures have dropped nearly 1500 point to the lows of Friday, posting a strong trend reversal and with prices looking to post the lowest daily close since mid-March. The market is concerned about interest rates and the possible actions of the Fed going forward. The market is likely pricing in a potentially strong interest hike at the next Fed meeting. The U.S. bond market has been pulling interest rates higher in the prospects of this tightening monetary action by the Fed. Regardless, the equity market’s tone turned more bearish to end the week, and the poor price action will likely lead to additional selling pressure to start the week next Monday. 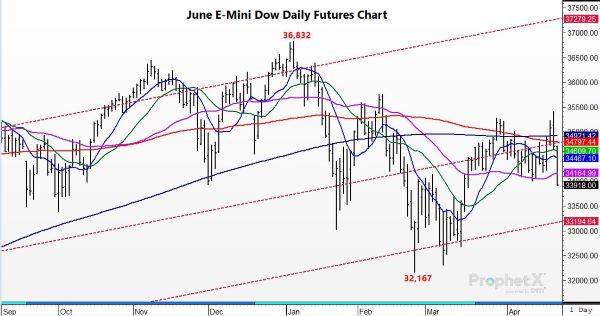 CORN HIGHLIGHTS: Corn futures finished in the red (despite good export news), losing 6-1/4 cents in July to end the session at 7.89. December closed 14-1/4 weaker, ending the day at 7-24-1/2. Bull spreading was a feature. This week is a challenging technical showing for corn, as it hit new contract high prices on Tuesday yet closed lower. Follow through selling indicates a weekly hook reversal (futures traded higher this week than last but closed weaker) for December futures and a reflection that U.S. farmers are expected to move quickly as fields become ready for planting. For the week, July futures added 5-1/4 cents and December lost 10-3/4.

Announced sales confirmed recent rumors of more purchases, with this morning’s figures indicating 1.347 mmt sold to China (735,000 mmt for this marketing year) and 281,000 to Mexico (90,200) mmt for this year – an additional 32.5 mb. Prices traded about 10 cents weaker on the overnight but rallied back to nearly 5 higher after the news, only to falter and head lower. Whether this was a buy the rumor and sell the fact scenario or traders looking beyond this news is uncertain. The idea of more acres planted than the March 31 estimate and a mostly drier forecast on the latest 6-to-10-day forecast to allow advanced in field work may have been at work today. Regardless, this was not a very strong end to the week for prices. Time of year suggests price usually starts to come under pressure as planters roll. Dry weather in southern Brazil could provide support next week if conditions stay as such.

SOYBEAN HIGHLIGHTS: Soybean futures found positive news in the form of an announced sale of 144,000 mmt to Mexico, yet prices dumped by day’s end, closing with sharp losses. May futures lost 32-1/4 cents to end the day at 17.16 but still had a positive week, gaining 33.75 cents higher. November dropped 26-1/2 cents on the session to close at 15.05-1/2 ending the week with a small gain of 3-3/4 cents. It appeared today may have been more related to profit taking, sell stops triggered, and a risk off environment as the stock market plunged for the second session in a row, at times down more than 800 points on the Dow Jones. News that Indonesia will ban palm oil exports was supportive, yet the market dismissed this news rather quickly.

Some are suggesting that corn planting is likely to fall behind as wet weather in gulf some of the Midwest. We believe this is too early to make any logical conclusion regarding acreage however there could be some who believe that switching acres to beans instead of longer day maturity corn. We don’t consider this much of an argument currently, but prices did plunge today. We also wonder if the corn and soybean markets hit levels in which traders may believe it could be difficult to find new buying interest. Consequently, when prices begin to weaken, sell stops are triggered. Supplies remain tight both domestically and worldwide, a reflection of drought-stricken crops in South America. Talk today that Argentina’s late planted beans are struggling due to dry weather was viewed as supportive. Yet prices still moved lower. China ports being clogged due to covid lockdowns could imply supply backups and thus more shipments later.

A mixed close for wheat in the face of lower corn and sharply lower soybean prices today may provide a glimmer of hope that the recent liquidation in the wheat market may be nearing an end. Both MPLS and Paris milling futures also traded higher today. MPLS is at a premium to KC as cold and wet weather in the northern Plains will delay spring wheat plantings. And that may be putting it lightly, with another potential blizzard in North Dakota and Montana. Looking southward, there are chances for light showers across the US southern Plains in the next few weeks, but it looks like they will not bring significant moisture. Longer term, the Climate Prediction Center’s seasonal drought outlook through July shows increased drought conditions in most of Iowa and surrounding areas too. The thing that really seems to be holding wheat back is poor export performance. US wheat is still not competitive to other origins (including eastern Europe). It was thought that the Ukraine war would shift export demand to the US but that has not happened so far. Old crop export sales data this week showed a marketing year low of only 1 mb. The war rages on in Ukraine with not much fresh news. It was noted though, that Russia did a test launch of the Sarmat “Satan II” intercontinental ballistic missile. It was loaded with a dummy warhead, but this missile is nuclear capable and only serves to increase war concerns. In other news, French wheat is faring much better than wheat here in the US with a rating of 91% good to excellent. Monday’s Crop Progress report is likely to tell a much different story for US winter wheat with ratings expected to remain poor, around the 30% good to excellent mark.

Trade today was waiting for the USDA Cattle on Feed and Cold Storage reports to set up next week’s trade. Cattle on feed numbers were heavier than expected for the second straight month. Total cattle on Feed totaled 12.1 million head as of April 1, 102% of last year, and above market expectations. This was the highest April 1 inventory since data was kept starting in 1996. Placements last month were at 100% of last year, but nearly 85 above expectations. Marketing totals were in line at 98% of last year. First looks show a heavier cattle supply than anticipated, and that should weigh on prices on Monday. USDA cold storage showed some slight product build as total pounds of beef in freezers were up 1% from the previous month and up 11% from last year. This reflects the above average carcass weight being processed, adding more pounds into the cooler as overall demand has been good. In daily fundamental, cash trade was completed on the week, with Southern live deals marked at $139 to $141, mostly $140, $1 higher than last week’s weighted averages. Northern dressed sales took place at $228 to $236, mostly $230, $4 higher than last week’s weighted average. Expectation will be for firmer trade next week, but the Cattle on Feed number may limit that enthusiasm. Boxed beef prices were softer at midday (Choice 269.79 -0.38, Select 255.03 -0.65) on movement of 56 midday loads. On the week, Choice carcasses were trading steady to lower. Feeder cattle market finished mixed to end the week, and Friday saw price supported by the softness in grain markets. The heavier placement numbers on the Cattle on Feed report will be a limiting factor to start trade next week.

The cattle market was building this week, fueled by the cash market. The heavier than expected cattle on feed numbers will likely weigh on the market to start the week, but it will still be the development of the cash market and the next Friday expiration of the April contract could support the market.

LEAN HOG HIGHLIGHTS: Hog futures saw some end of the week recovery, as the cash market tried to find a little footing on Thursday and Friday. Market participants saw some end of the week profit taking and squaring of positions for the weekend.  May hogs gained 1.000, closing at 111.850 and June was up 1.600 at 118.775. For the week, May hogs lost 0.900, and June gained 0.300.

June hog futures consolidated and held support at the 40 and 50-day moving averages. This will set up an interesting start to the week. If prices break lower, there is additional downside room, with the next support at the $115 level. Cash markets have been choppy this week. Midday direct trade was lower, losing -7.18 to 98.23, and the five-day average settle to 100.70. The lean hog index gained 0.32 on the day to 101.25. For the week, the index traded 2.06 higher. The strong cash premium to the cash market is still a concern and will likely stay as a limiting factor to near-term rallies. Pork retail values were 2.00 higher at midday to 112.20 on movement of 244 loads. If those prices hold, pork carcasses will be $2-3 higher on the week. The USDA released the Cold Storage report on Friday after noon and frozen pork supplies were up 2% from the previous month and up 8% from last year. Stocks of pork bellies were up 13% from last month and up 60% from last year. Growing pork supplies are likely reflection the heavier overall slaughter weights, and the slowing export demand seen for U.S. pork. Lean hog charts look cautious going into the end of the week, and growing pork supplies will be a concern. The short-term path still looks lower going into next week.

DAIRY HIGHLIGHTS: Class IV products leading the market lower. During this week’s trade, the US spot butter market fell 8.75c and closed down at $2.6675/lb. The spot powder market fell a total of 6.75c and closed down at $1.7550/lb. Both markets look to be headed towards a short-term downtrend as demand weakens. Over in the Class III side, the whey trade was unchanged this week at $0.6350/lb, while the block/barrel average cheese price was down 2.50c for the week. The US cheese price still remains elevated near multi-year highs, up at $2.38125/lb. Strong international demand for US cheese has helped support the high price. The weakness in the spot products kept Class III and IV milk futures lower. Second month Class III fell 91c while second month Class IV fell 40c.