The USDA released the first winter wheat crop ratings on Monday afternoon, and the impact of dry weather in the southern Plains was very noticeable. The USDA pegged this year’s crop at 30% good/excellent condition, which was 22 points below the 5-year average. Analysts were expecting a 32% rating. In a dataset going back to 1986, only the year 1986 had a lower first rating for winter wheat, which was at 27% good/excellent. Beyond the low good/excellent rating, 36% of the crop was classified as poor to very poor, as ongoing drought and dry conditions have gripped the southern Plains. The low crop ratings have brought some buying into the wheat market as concern builds in a tight global supply market. 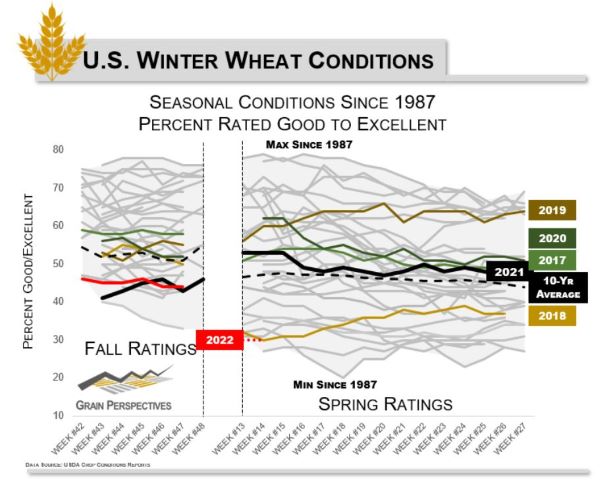 CORN HIGHLIGHTS: Corn futures continued their bullish ways moving higher today on talk of more exports to China and a growing reality that Ukraine is a troubled region with fading hopes of a shipping and growing season. July closed 9 cents firmer to end the day at 7.48-12, a new contract high close. December closed 7-1/2 firmer at 7.06-1/2, also a new contract high close. Strength in soybeans and wheat also provided support as did steady to higher energy prices.

A poorly rated winter wheat crop (second lowest rating since the 90s) would suggest poor pasture conditions and additional corn usage. Longer range forecasters are split, however, some are calling for longer term warmer and drier. The National Weather Service outlook shows above average temperature for 90 days out. The central Midwest is forecasted for above average rainfall. Countering more corn usage due to poor pastures is avian bird flu cases with continue to rise. Spring planting will pick up speed as each day passes, yet many are off to a slow start due to cold and wet. We don’t view this a potential change to supply; it is too early in the season.

SOYBEAN HIGHLIGHTS: Soybean futures finished strongly higher on solid gains in soymeal and soybean oil contracts. China is on holiday, yet rumors have them buying soybeans when they come back on Thursday. Meal gained nearly 10.00 and oil 28 to 30 points. May soybeans added 28-3/4 to close at 16.31 and November gained 16 closing firmer for the second consecutive session at 14.55-3/4.

After the acreage report, soybean futures took a strong plunge, losing nearly 80 cents, while corn futures gained ground. Suddenly it looks more advantageous to produce corn, and consequently soybeans may be starting lose acres. If this is the case, November futures may be battling for acres, and this will occur through price appreciation. A great sense of reality out of Ukraine that the war will drag on and that crop production as well as moving product will be anything but normal. This likely means increased demand for US soy oil but also other products such as meal and corn to fill the supply void left by the region. Crush margins remained favorable. Wet conditions in the delta region could limit planting progress.

Wheat led the grains higher today as the war continues to add premium back into the marketplace. Ukraine’s President Zelensky addressed the United Nations today asking for more help, and there is talk of more US sanctions to be placed against Russia. The EU did issue new sanctions against them, on the order of $10 billion. This in part caused Paris milling futures to gap higher on several contracts. Russia’s damage to Ukraine ports and infrastructure could mean that as much as 5-10 mmt less wheat will be shipped out of the Black Sea. In other news, the USDA’s winter wheat crop ratings were released yesterday afternoon. Only 30% was rated good to excellent, which was below expectations of 40% and well below last year’s 53%. This is the second lowest rating on record for April. Dryness in HRW areas has been a problem, and forecasts suggest that much of the western HRW belt will be dry and warm for April through May (with expansion eastward later in May). Shorter term, the two-week forecast suggests warm temperatures, but more importantly high winds that could damage the crop.

CATTLE HIGHLIGHTS: Cattle futures another day of long liquidation as money flow continues to move out of the cattle market, fueled by high grain prices and concerns regarding the consumer spending ability. April Live cattle dropped 1.200 to 136.800, and June fell 1.600 to 133.325. For feeders, May led the market lower, losing 3.475 to 159.000.

The technical weakness and long liquidation it has triggered has seen live cattle futures push to the lowest closes in a month. The weak price action at the end of the day still signals that the selling pressure is likely to continue into Wednesday. The market looks poised to test the lows from early March, which is 130.975 on the June contract. The cash market is still developing this week but has seen light trade. Some Nebraska trade was registered at $140, building a trade range of $138-140 on the week, steady to firm with last week. Today’s slaughter totaled 125,000 head, even with last week, but 5,000 greater than a year ago. This heavier slaughter pace is keeping pressure on the market in general. Boxed beef values have been trading firmer and were strong at midday with Choice gaining 5.78 to 273.28 and Select 2.24 higher to 263.94 on movement of 66 loads. Retailers may be looking to step in the market to secure beef supplies with May and the start of grilling season around the corner. Feeder cattle fell under the weight of corn prices again on Tuesday as the market continued to break technically lower. May feeders have dropped $10 in the last six trading sessions and posted its lowest close going back to the early life of the contract last June. The feeder market still has room to fall, possibly targeting the $155 area. The money flow is winning the battle in the cattle market, despite the optimism on retail demand, and forecasted tighter supply picture going forward. The cattle market is starting to look like a value, but still in search of a low at this time.

LEAN HOG HIGHLIGHTS: Hog futures settled sharply lower as long liquidation continues for the fourth consecutive day, and weak-looking charts may cause technical selling. Apr hogs lost 1.775, closing at 97.675 and June was down 1.800 at 114.350.

The technical selling in the hog market continues to push prices lower. Price action on Tuesday was weak, as early session gains rolled over into triple digit loses by the close. June hogs closed below the 50-day moving average for the first time since December and keeps the door open for a test of the 100-day and trendline support as low at $104. The cash market has helped trigger this pull back as the trend has been softer. National direct midday values were unreported, but closed at 100.96, and the 5-day average is at 102.67. Lean hogs index was lower, losing 0.22 to 102.41. April contract expires on the 14th, so the hog market may be looking at the premium of the deferred futures over the index, adding to the selling pressure. Pork carcass values were softer at midday, losing 0.46 to 105.89. Load count was light to moderate at 142 loads. Hogs are searching for a low, but the technical picture is weak, and prices are tending lower.

DAIRY HIGHLIGHTS: After an ugly day for the nearby months to begin the week, Class III milk was solidly higher during Tuesday’s trade with the May contract closing at $24.40. Spot cheese traded 0.3750 cents lower today for a total loss of 1.25 cents so far this week, hanging just above the $2.26/lb mark. This is near previous year peaks which have served as resistance, but the market has at least not seen a dramatic fallback. Whey prices were unchanged at $0.59/lb, breaking an eight-day losing streak. Class IV trade was mixed with some minor weakness in the nearby while some contracts in the second half of the year held gains. Spot butter was up 2 cents today to trade to $2.74/lb with powder down a penny to $1.84/lb as both Class IV spot markets hold sideways patterns.