The cattle market has been under pressure for the past couple of weeks, and the value of Choice retail beef has been one of the factors. The value of Choice retail beef has been trending lower and is trading at a two-year low. At midday, Choice beef carcasses were at $255.00, well below the price levels of the last two years. Packers have had a readily available supply of beef to them in the market as slaughter pace and carcass weights are running well above last year’s levels. This has allowed them to keep Choice beef prices at a discount to move product. In addition, the typical spring grilling demand has been late to develop this year, as spring temperatures have been colder over a large portion of the country. The demand for beef has been good, led by strong export demand, but the concerns are with the U.S. consumer. Inflation has the market worried about the spending capacity of the American consumer and their decision to go with cheaper protein sources like pork and poultry. All these factors have added up to pressure on the retail market, which in turn has limited upside potential in live cattle futures. 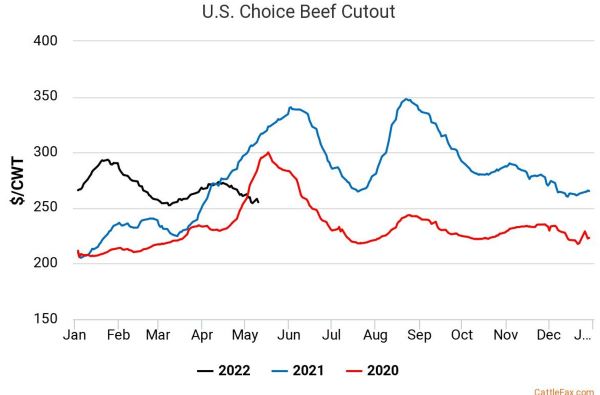 Tomorrow’s report is due for release at 11:00 central and expected to show 2021/2022 ending stocks at 1.404 bb, down slightly from 1.440 in April. Increased exports are expected, mainly due to the war in Ukraine. The 2022/2023 projected crop average estimate of analysts is 14.779 bb, down from last year’s 15.115, due mainly to few acres. Ending stocks for next year are forecasted at 1.305 bb, a rather snug number to start the season. So much is riding on weather this season. Good weather from this point forward and futures may have seen their high. Any questionable conditions or adverse production weather forecasts and prices advance to new highs for the year and maybe for the life of all contract years. The wild card tomorrow is if the USDA will drop yield due to late planting. In 2013, due to a late spring, the USDA did reduce yield from base-line projections. Baseline yield for the 2022 crop is 181 bu/acre. The question is, with such a slow start is that even possible even if crop conditions are ideal moving forward from this point.

SOYBEAN HIGHLIGHTS: Soybean futures closed higher again today with a combination of the CPI coming out at 0.6% above analyst expectations of 0.4% and a slightly lower dollar. A rise in soybean oil contributed to the gains, which have been supported by higher diesel prices. July gained 14-1/2 cents, closing at 16.06-3/4, and Nov gained 17-1/2 cents at 14.72-1/4. Traders will look to tomorrow’s WASDE report for a likely reduction in old crop ending stocks.

Tomorrow’s focus is the WASDE report, where a clearer picture of old crop ending stocks, 22-23 production, and world ending stocks will be known. Analysts are expecting a reduction in US old crop soybeans from 260 mb to 222 mb, which would be the lowest in six years. US production estimates are record high at 4.604 bb based on a record high 91.0 million planted acres. World ending stocks for soybeans are estimated at 89mmt down from 89.6mmt. While these estimates appear bullish much of this could already be priced into the market, so tomorrow we will see how much deviation occurs. There is also possibility for surprise weather ahead, so it would not be a bad idea to make some cash sales here and cover. With supplies getting tight, the overall trend remains higher with support for the July contract at the April low of 15.60-1/2.

All three US wheat classes closed sharply higher. MPLS futures led the way with September gaining 38-1/4 cents to 12.51-3/4 and closing just off the new contract high of 12.53-1/4. Paris milling wheat futures also gained over 6 Euros per metric ton with a new high close in the September contract of 403.25. Wheat was not alone today as corn and soybeans also traded higher. The 8-14 day forecast puts some rain back into the Midwest, which could delay some plantings of those crops. This may have played a part in today’s grain rally, but there are other factors at play as well. CPI data came in higher than expected and may have given grains a boost. But looking at wheat in particular, weather seems to be the driving factor. Parts of the southern Plains are too hot and dry, parts of the northern Plains are too wet, and global weather is a concern as well. India is hot and dry along with Europe and the Baltics. Iran, Pakistan, and Bangladesh are all tendering for wheat too, and global exporters are on the decline. Tomorrow’s USDA report will provide direction to the market; while there are no big changes expected, surprises are never out of the question. Pre-report estimates peg US all wheat production at 1,789 mb (vs 1,646 mb last year). Carryout for 21/22 is estimated at 681 mb vs 678 mb on the April report. The 22/23 wheat carryout average estimate comes in at 655 mb. The average world ending stocks for 21/22 is basically unchanged at 278.3 mmt (vs 278.4 in April) while the 22/23 average guess comes in at 271.6 mmt.

CATTLE HIGHLIGHTS: Live cattle futures saw mixed trade on Wednesday as the development of cash trade brought some value buying into the cattle market, despite the steady pressure on retail beef prices. June cattle gained 1.175 to 133.575, and August was 0.550 higher to 134.650. A strong tone in the grain market pressured feeder prices at the August Feeder dropped 1.850 to 170.00.

The live cattle market saw prices consolidate on the recent lows, and June is still trading under the 200-day moving average. This level will continue to be a sticking point for cattle prices, and the longer the market trades below this level, the prospects of a downside break stay in front of the market. Cash prices started developing on Wednesday, and trade stayed mostly steady with last week. In the South, light $140 began to develop, and the north saw $144 and $227-230 dress trade, mostly steady with last week. The cash market supported the front-end of the futures market, given the premium of the cash market. Retail beef demand has weighed on prices. Choice beef cutout values fell $3.05 Tuesday to $255.24, near an 8-month low. At Midday, price stayed soft, losing 0.22 to 255.02, and Select was 0.03 lower to 242.32. Load count still shows good movement at 123 midday loads, as the discounted retail beef is bringing retail interest. Prime grilling season is nearing, and this retail level could be the building of a spring retail low. Feeders are poised to retest near-term lows, as downward momentum continues. The direction of grain prices will likely dictate the money flow into the feeder market. The cattle market looks concerning, as the downside looks to be the easiest path in the near-term. Additional value may be determined as a value, especially in deferred positions, given the overall supply numbers and trend seen in cattle supplies.

June lean hogs are still showing a downward trend, and on Wednesday prices closed at the lowest level since January, mostly eliminating the entire spring rally. Prices may still have more downside room as prices have closed under the 200-day moving average, and this keeps an additional downside break as a possibility. Demand is still a big concern as retail prices have struggled. Retail values have trended lower throughout the spring as grilling demand and export demand has been lacking. Midday carcass values were 0.51 higher to 100.70, as prices try and hold the $100.00 level. Movement was moderate at 148 loads. The CME pork cutout index has also been trending lower, down 1.20 to 103.77 on Wednesday. The market will be watching export sales numbers on Thursday morning to watch for an uptick in export demand. Midday cash market are showing a glimmer of hope with strong morning direct trade, gaining 6.67 to 112.36 and a 5-day average at 103.89 but trending higher. CME lean hog index was unchanged at 101.90 on the day. The firmer direct tone should support the index over the next couple days. The technical picture is still weak, and buyers are still absent in the market. The trend still looks lower in the near-term and the hog market is oversold, but the triggers to bring money flow back into the hog market are lacking.

DAIRY HIGHLIGHTS: For the first time in three sessions, the spot cheese block/barrel average price closed higher, as buyers got aggressive. Buyers bid the block price 4.50c higher to $2.3075/lb on just one load traded and also bid up the barrel market 5.50c to $2.3950/lb on two loads traded. This was a strong turnaround from the past two sessions, where blocks had fallen 8.75c and barrels had fallen 4c over that stretch. The recovery in cheese and the strength by the buyers gave class III milk futures a boost on Wednesday. The second month June contract recovered 30c to $23.81 and July added 41c to $23.78. The class IV trade was neutral to lower as butter was bid up but powder was offered lower.