The flow of money and its direction can tell a lot about the sentiment in a market, and over the past few weeks, funds have been moving out of their long corn positions. On last week’s Commitment of Trader’s report. Last week as of Tuesday, managed money reduced its long position to 291,469 combined long positions, down over 48,000 contracts from the previous week. The drop in positions falls in line with the same pattern last year as money was moving to the sideline to see the development of the crop. The pressure in the corn market as come from an improved planting pace over the past couple week, as U.S. producers quickly closed the gap on the planting of the corn crop. The impact of the wheat market has had a significant impact, as more talk of possible exports trying to get out of the Ukraine have pulled value out of the wheat market. Going forward, weather or geopolitical events could be the next trigger to bring the buyers back into the corn market, but for the short term, the funds seem to be comfortable taking profits at this time. 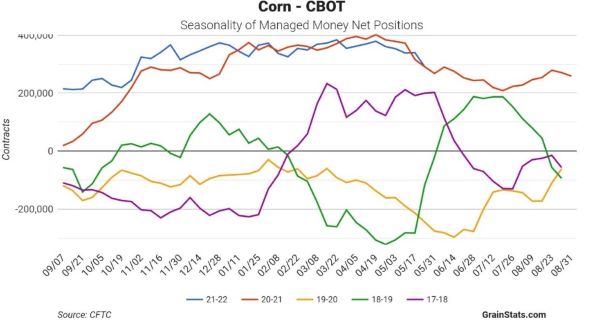 CORN HIGHLIGHTS: Corn futures started the day softer and then basically collapsed following sharply lower wheat and soybean prices lower. July futures lost 23-3/4 cents to end the session at 7.53-1/2, its lowest close since April 7. December corn lost 18-1/2 to close at 7.11-1/2, its weakest finish since the first week of April. However, the low in December held at the Bollinger band and at last week’s low. July closed below both last week’s low and the Bollinger band. End of month book squaring and funds dropping more long positions were primary reasons for today’s drop. Sharp early morning gains in crude oil were also erased add to a downturn for commodities.

We don’t want to read too much into one day; however, what appears to be mostly supportive news (higher crude, lower dollar, uncertainty in weather) and a late start to the growing season and yet traders are shedding longs. Or, as mentioned last week, money managers may be looking to buy equities and reduce long commodities. Talk that Putin would allow/facilitate grain shipments out of Ukraine if sanctions were reduced or removed probably doesn’t have merit, yet futures were still lower today. Even solid inspections at 54.71 mb were shrugged off. The year-to-date total is now 1.667 bb in a year where export sales are forecast at 2.500 bb. The Crop Progress report released this afternoon at 3:00 indicated 86% planted verses a five-year average of 87%. Emergence was 61% versus the five-year average of 68% shows the crop is catching up but still behind.

Crude oil surged for most of the day but lost most of its gains by market close. It was interesting that soybean oil did not follow it higher like it has characteristically been doing. Soybeans, meal, and oil all opened lower and continued the descent throughout the day, which felt like funds liquidating positions. According to the CFTC report on Friday, non-commercials increased their net long position by 10,580 contracts last week, bringing it to 163,067 contracts. Friday’s USDA report of soybean crush in Illinois showed the value of soybean crush high at 20.40, but with crush premium now at 2.57 a bushel, down from 2.90 the previous week. For the most part today, it seemed like soybeans followed corn and wheat lower after Russia has been floating the possibility that it will allow Ukraine to export grain safely. If this becomes true, prices could fall further, but in the more likely event that Russia increases their attacks or bars Ukraine from exporting, grains should correct to the upside.

After coming back from a three-day weekend, it was a rough day to say the least, with a limit down close in July wheat. All three US classes were severely lower, as were Paris milling wheat futures, which lost roughly 14 Euros (per metric ton). Much of the weakness seems to be tied to the Russia / Ukraine situation. The UN has been pressuring Russia to allow grain shipments out of Ukraine. So far this has been unsuccessful, but Putin reportedly said that he would agree to open a sea “corridor”. The only problem is that sanctions against Russia would have to be lifted first. If some sort of deal is reached, the wheat market is likely overvalued currently. An improved forecast in Europe may have also played a part in taking some of that weather premium out of the market today. Finally, end of the month profit taking may have had a role in today’s weakness as well, since wheat was not the only commodity under pressure. Corn, soybeans, and livestock also finished the session sharply lower. In other news, weekly data showed wheat inspections at 12.6 mb, still down 24% from last year.

CATTLE HIGHLIGHTS: Live cattle and feeder cattle futures closed lower in a steady descent from market open to close. Higher crude, lower cash, and lower grains across the board contributed to the losses. Jun cattle finished 1.650 lower to 130.525, and Aug live cattle were 2.025 lower to 130.375. In feeders, Aug feeders lost 1.200 to 165.125.

The entire grain complex moved sharply lower today and apparently livestock were not immune to the sell-off. The feeling is that funds have been liquidating large positions, and the CFTC report has shown this for last week with managed money reducing their net long position in live cattle to just 16,314 contracts and adding to their already net short position in feeder cattle bringing it to 8,996 contracts. Cash has been called around 135 with some reports of up to 145 depending on location, but overall cash has trended lower the past two weeks. There may be some bullishness with the packer needing to replenish supplies from the holiday weekend which could supply some higher bids. Boxed beef is higher with choice up 2.12 to 267.54 and select up 2.15 to 248.65. Weights continue to fall, which could offset the influx of market-ready cattle this week and force the packer to be more aggressive to keep up with rising beef demand.

LEAN HOG HIGHLIGHTS: Hog futures saw strong selling pressure to start the week as the market saw end of the month profit taking led by the large premium of the futures market over the cash market. June hogs finished 2.425 lower to 107.975, and Aug hogs lost 3.725 to 108.000.

for June hogs, the inability to get through the 100-day moving average turned into a sell signal to start the week. Selling was strong from the start, as prices gapped lower on the open and closed near the bottom of the daily range. The technical picture stays weak into Wednesday, as prices closed under the 10-day moving average. The next level of support will be the 20-day at 105.350, with a possible test of the 200-day at 102.900 area. The cash market has been supported under the hog futures, and midday direct trade turned back higher on Tuesday afternoon. Midday direct trade was 0.55 higher with the weighted average at 109.09 on Wednesday, and the 5-day average moved lower to 110.75. The CME Lean Hog Index is reflecting the higher cash tone overall and gained 0.53 to 104.93. Estimated slaughter last week was 2.351 million head, down 2.6% from last week, and 1.1% from last year. Hog dressed weights were unchanged from last week’s average at 219 pounds, but still 2.3% higher than last year. Despite lower slaughter numbers, the excess pounds keep overall pork production up 0.9% over last year. The extra pork in the cooler in a demand concerned market helps weigh on prices. Moving past the Memorial Day holiday, retail demand will look for signs of some possible uptick. Retail values trended higher at midday with carcass values 3.52 higher to 109.68. Movement was good at 170 loads. The CME Pork Cutout Index slipped .23 to 107.32. The hog market rally may have run out of gas in the short-term, especially with the pull back in prices on Tuesday. This turn lower could be due to the end of the month, but the premium the futures market was holding to the cash market weighed on prices.

DAIRY HIGHLIGHTS: Milk futures added to their recent uptrend with moderate gains in today’s action, coming off a long holiday weekend and closing out the month. As of the end of May, June Class III futures were just 4 cents higher within a $1.62 range, while June Class IV futures jumped $1.40 amidst a $1.98 range. The Class III calendar year average has recovered to roughly 30 cents off its peak from mid-April, closing today’s trade at $23.50, while the Class IV calendar year average hit a new high at $24.90. The spot market trade was mostly quiet today with cheese, butter, and powder all near multi-year highs.