While commodity markets started the week with selling pressure, the cue that triggered the selling likely can from the weakness in the equity markets. E-Mini Dow futures and the traded Dow has been under strong selling since the Fed announcement regarding the raising of interest rates last week. This has continued the path lower since the start of the year as the E-Mini Do futures have lost over 4,000 points. The concerns regarding inflation, the strong U.S. dollar, tightening money supply, and the action of the bond market have been the signal to push money to the sidelines. In addition, Volatility has been on the increase, and the higher volatility index has triggered risk-off trade, driving prices lower. On weekly charts, E-Mini Dow Futures, prices are testing key support levels that haven’t been tested since Oct 2021. The technical picture looks concerning is support doesn’t hold, there is plenty of room to the downside for equity markets to test. That type of move will likely maintain overall nervousness and concern across the markets in general. 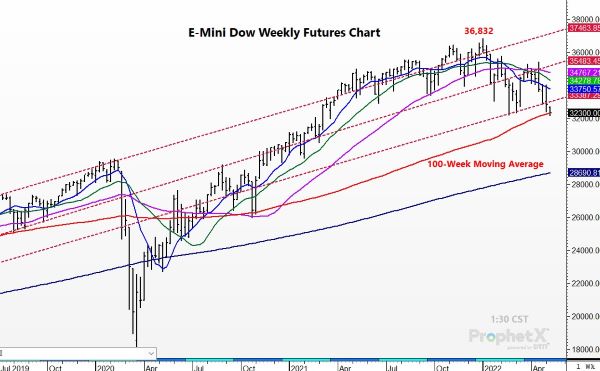 CORN HIGHLIGHTS: Corn futures started weaker and stayed as such throughout the session. Broad-based “risk off” selling had many markets on the defensive, including row crops and energies. Ideas that planting progress will make big strides this week also had the trade paring down long positions. July lost 12-3/4 cents to close at 7.72, and December gave up 10 to end the session at 7.10-3/4, its lowest close since early April. A continuous firming dollar and weak equity market didn’t help corn’s cause today either.

Export inspections at nearly 55 mb were termed supportive, bringing the year-to-date total to 1.496 bb or 59.8% of total expected sales of 2.5 bb. Today’s technical trade looked weak with prices violating the lower band of the Bollinger band, as well a second consecutive close beneath the 21-day moving average, something that has not occurred since before the first of the year. Expectations for rapid planting progress in the days ahead and continued concerns that lockdowns in over 40 cities in China will remain impactful to demand are pressuring prices as is a broad base sell-off in commodities and equities. Equities dropped below levels that were established just after the war erupted in Ukraine. Yet, bulls will argue the market was over-due for a correction and with Brazil’s second crop corn being downgraded by private forecasters, prices are well supported. They may have a point.

SOYBEAN HIGHLIGHTS: Soybean futures were dragged lower by a large hit to the energy complex which affected the entire market today, a sharp drop in soybean meal of 10.8 in Jul, and the anticipation of increased planting this week. Jul soybeans fell 36-3/4 cents, closing at 1585-1/4 and Nov lost 24 cents at 1446-3/4.

Export inspections at nearly 18.5 mb were termed supportive, bringing the year-to-date total to 1.751 bb or 82.8% of total expected sales of 2.115 bb. In addition to the hit in meal and improved weather forecast which should allow for significant planting this week, the stock market fell dramatically again today, and commodities seem to be falling in sympathy. The likely culprit for the dip in meal is fund selling with non-commercials holding a net long position of 99,561 and risk of further liquidation. Though China remains the top buyer of both US corn and soybeans, their recent lockdowns have put a damper on demand for the moment while the USDA has estimated a record number of planted bean acres at 91.0 million. Even though we have seen some price correction, longer-term demand from crush and exports is still strong and should keep pace with production.

Though the story for wheat has not changed much since last week, improvements to the weather forecast with warmer and drier weather in many parts of the Midwest had corn and soybeans under pressure today, taking wheat along for the ride. While this should allow for the planting pace to pick up for corn and beans, the northern Plains are a different story. Lingering rains in that part of the country may further delay spring wheat planting. And though closing lower today, MPLS futures continued to make new highs. Paris milling wheat futures, though closing lower as well, also continue to establish new highs. Heat and dry weather in Europe seem to be driving that market. On the other end of the spectrum from MPLS, the seven-day forecast for the southwestern Plains is mostly dry. With HRW wheat conditions already poor this won’t be of any help to that crop which has been struggling with drought. Today’s Crop Progress report is not expected to show big changes to winter wheat conditions with pre-report estimates averaging up 1% from last week at 28% good to excellent. Additionally, spring wheat is expected to be 28 % planted vs 19% last week. In other news, today’s inspections data showed wheat inspections at 8.7 mb, down 20% from last year.

CATTLE HIGHLIGHTS: Live cattle futures finished with mixed trade to start the week. Cattle prices shook off early session lows on Monday, as the discount to the cash market and strong midday retail values supported the front of the Live cattle market. Gains were limited by concerns in the market due to weakness in the macro-markets with strong selling in equity and energy markets. June Live cattle gained 0.800 to 133.550, and August added 0.025 to 135.375. Feeder cattle saw light gains in May cattle finishing 0.250 higher to 159.800, but August was 0.475 lower to 174.225.

Despite strong selling pressure in the grain markets, buyers stayed quiet in cattle futures for the most part on Monday. The influences of strong pressure in equity markets and energy markets limited gains in cattle markets. Cash trade is undeveloped on Monday, but expectations are for a steady to firmer cash trade, and with June futures trading at a discount to the expected cash, looked like a value. Cash trade volume will likely develop later in the week. Retail values saw strong buying support to start the week as Choice carcasses gained 4.57 to 259.01 at midday. Select carcasses were 0.81 softer to 244.25. Load count was light at 71 midday loads. Warmer temperature forecasts likely helped demand, as the cold spring has delayed some of the potential grilling demand. Estimated slaughter to start the week was at 121,000 head for Monday, 10,000 head above last week, with heavier weight, the cattle numbers and product produced has been a limiting factor in cattle markets. Feeder cattle struggled to find footing even with a weaker grain market, as softness in live cattle market in general limited feeder gains. With May expiration around the corner, the May futures are tied to the cash index, which gained 0.70 to 156.21. The cattle market saw some value buying on the soft opening, which is encouraging that buyers were ready to step in at those levels. The pressure from outside markets could stay as a limiting factor, as cattle prices are trying to build a near-term bottom.

LEAN HOG HIGHLIGHTS: Hog futures saw strong selling pressure to start the week, as concerns regarding demand and large slaughter numbers with heavier carcass weights keep the supply side of the market heavy in the near-term. May hogs traded 1.325 lower to 100.875, and Jun lost 2.800 to 101.300.

Jun hogs posted a price gap lower and closed at the lowest point since January. Most importantly, prices closed below the 200-day moving average for the first time since October. Prices are still looking for a bottom and may be ready to test the January low for the year at 95.330 from January 11. The May contract is still tied to the cash index. The index traded 0.05 lower on Monday to 100.91 as May futures are in line with the index. The cash market still looks to be an issue, limiting the front end of the market. In morning direct cash trade, prices were 0.97 higher to 101.42 and a 5-day average of 102.35. Retail carcasses were softer at midday, slipping 0.16 to 104.54 on light demand of 166 loads. Carcass values, in general, have been choppy trended lower last week, and look to be off to a soft start on Monday. Weekly hog slaughter, last week stood at 2.427 million head, up 1.6% over last week and 1.3% over last year. On the year, total hog slaughter is down 5.4% compared to last year, but pork carcass weights are running well above last year and 5-year averages. This large hog number in the near-term and heavier hog weights have been a limiting factor in the current hog market. Finding a low is a process, and the price action to end of last week had summer hogs pointing to a retest of that potential lows this week, which was verified today.

DAIRY HIGHLIGHTS: Class III contracts fell hard to start the week with the June contract leading the way downward with losses of 68 cents, closing at $23.78. This represents the lowest the second month contract has closed since March 29, after falling for its third straight week last week. While spot cheese prices have avoided a selloff recently, today the block/barrel average dropped 4.1250 cents to $2.32375/lb. That average has hung above $2.30/lb for the better part of a month and while the regional cheese reports mention lesser domestic demand, export demand remains a bright spot. To avoid a shift in the longer-term trend to down, Class III futures will want to see some technical support come into play soon.