The weekly USDA drought monitor maps showed expansion of drought areas across the grain belt. Breaking that down, currently 35% of this year’s principal corn acres are experiencing some level of drought. This total was up 11% from last week, as hot temperatures and low rainfall amounts were dominant over the past week. It is still very early in the year, and there is time for the crop to recover if rainfall forecasts change. The next few weeks could be critical if dryness persists. Long range forecast is keeping above average temperature and below average rainfall as the theme for the corn belt. With the current supply forecast at 1.357 billion bushels for 2021-22 carryout, the market will be keeping weather premium priced in. The volatility the market has seen recently will continue, as daily weather forecast models will be closely watched. The market will move according to those forecasts. 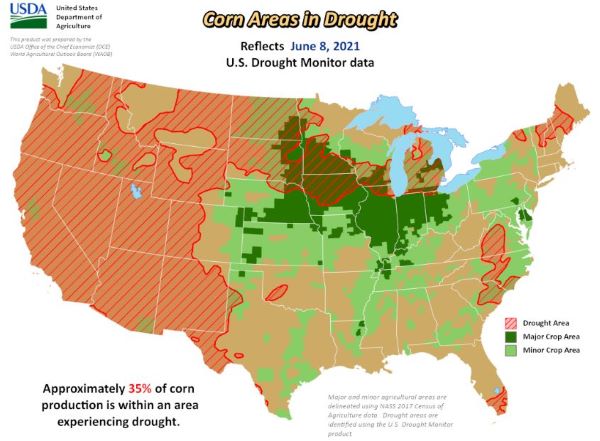 CORN HIGHLIGHTS: Corn futures finished with losses of 14-1/2 cents in July and 6-3/4 in December. July’s close was 6.84-1/2. While lower for the day, it finished the week up 1-3/4 cents. December corn gained 18-1/4 cents compared to last Friday. Early weakness was tied to rain on the radar covering larger areas in the western corn belt. Yet, as the day wore on it appeared most were receiving less rain than it may have looked, and showers were breaking up. The latest 6-to-10-day forecast is again mostly unchanged; the entire Midwest is below normal in precipitation and above normal in temperature. Somewhat quickly the crop is being divided into the haves and have nots from a moisture perspective. Some received beneficial rainfall that will take them through the end of the month or perhaps into July while others continue to wait. If temperatures do remain on the warm side and rainfall is lacking next week, we suspect there will be a more legitimate call for a potential downgrade to the yield where currently the USDA estimate is 179.5 bushels an acre. Brazil’s CONAB lowered its corn estimate for Brazil to 96.4 mmt. Yesterday the USDA estimate came in at 98.5 mmt.

SOYBEAN HIGHLIGHTS: Soybean future closed with sharp losses of 15 to 35-1/2 cents as July lead today’s drop closing at 15.08-1/2, down 75-1/4 cents on the week. November finished the week up 3-1/4 cents, closing at 14.38-3/4. November lost 20-3/4 cents today. Traders were exiting long and either putting premium in deferred months due to weather or significantly exiting bull spreads. Soybeans were likely pressured by a USDA increase to ending stocks. Albeit small, it signaled declining demand for the old crop. Heavy losses in soybean oil were noted with futures closing at their lowest price since June 1. Futures moved through the 10- and 21-day moving average, which likely uncovered cell stops. World vegetable oils have been tight for some time, and the surge in prices this spring and early summer may be chasing demand away from the market. Despite small increases to carry out and talk of world vegetable oil prices topping, supplies remain very thin and leave no room for error with this year’s crop. It was noted that basis levels in Brazil are on the rise, which likely suggests limited supplies or farmers refusal to be aggressive sellers. Weather remains bullish for soybeans in US.

WHEAT HIGHLIGHTS: Jul Chi down 3 cents at 6.80 3/4 and Dec down 4 cents at 6.93 1/4. Jul KC wheat down 2 1/4 cents at 6.38 and Dec down 2 3/4 cents at 6.54 1/2. Wheat pressured today from corn, weather, and yesterday’s USDA report. Yesterday USDA raised wheat production for the US and global production increased for the EU, Russia, Ukraine, and & Australia, increasing an already record large production projection for this year to now total 294.4 mmt. Aside from the report, all grain was pressured by the storms that have moved across areas of Nebraska, Dakotas, and Minnesota and expected to wrap up this weekend. However, all of these rains are short-lived and have missed much of the grain belt. Next week almost all key production areas are supposed to be unseasonably warm and dry with potential record high temps. The only silver lining for the dry weather is winter wheat harvest should be able to move ahead with little interruption. Monday’s crop conditions are expected to show spring wheat continuing to deteriorate, even with these rains hitting much needed areas.