Many different variables effects the markets on Thursday, causing the risk-off trade, one large factor was the surge higher in the U.S. dollar index.  For the past two trading sessions, the U.S. dollar index has surged 200 ticks, and is trading at its highest level in over two months.  Technically, the dollar looks strong, pushing well past the 200-day moving average, opening the upside further.  The upbeat tone from the Fed meeting on Wednesday and the talk of tapering possibly kicking in earlier than anticipated is helping fuel the change in sentiment for the greenback.  The stronger dollar quickly become a negative for the commodity and equity markets, which have been strong supported by the weak dollar tone and the friendly monetary policy.  At least for now, the dollar bulls have some news and could push the dollar index higher in the short-term. 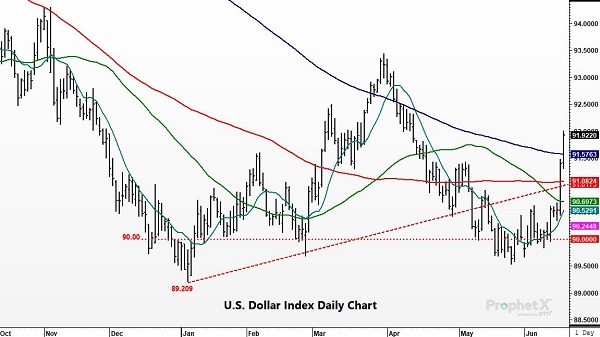 CORN HIGHLIGHTS: Corn futures collapsed with limit down registered on the first 6 contracts listed, which are July 2021 through July 2022. Limit down is 40 cents and with today dump this means tomorrows trade will have expanded limits, or 60 cents for corn. July futures finished at 6.33 and December 5.32-1/2. Both closed at their lowest level since May 26. Today was likely liquidation as mounting margin calls and violation of the 21 and 50 day moving created an environment where traders were heading to the sidelines or adding to short positions. Forecasts continue to call for rain for much of the Midwest as a generally cooler than normal forecast with a cold weather front that is expected to vacillate by first move north to south creating rain and then move back north, also adding to chance of additional moisture. Export sales were light at .7 mb of corn export sales for old crop and 10.9 mb for new crop. The year-to-date total is now 2.729 bb or 95.8 of expected total sales of 2.850 bb. Another jump in the US dollar which now has reached a two-month high was said to be impart the reason for a broad-based sell off in commodities. Talk that China is cracking down on speculation may also be impacting prices.

SOYBEAN HIGHLIGHTS: Soybean futures suffered server losses and perhaps their biggest down day ever losing 1.18-3/4 in July to close at 13.29-3/4 and 90-1/2 in November to end the session at 12.52-3.4. Massive liquidation in soybeans and soybean oil was noted today as oil traded and closed the expanded limit. The July soybean oil contract has lost 23% of its value in little over a week. There are perhaps many reasons for the sharp selloff. One is a sharp rally in the dollar as the Federal reserve indicated a change in its view on inflation and interest rates. Another reason is a call for moisture throughout big portions of the US the next couple of weeks. Still others may point to the Biden Administration mulling over biofuel blend requirements as well as China suggest they are cracking down on speculation. Lastly and as plausible as any reason on a day like this is mounting margin calls and traders liquidating long positions. No matter how you slice it today was ugly.

WHEAT HIGHLIGHTS:  Jul Chi down 23 3/4 cents at 6.39 & Dec down 22 1/4 cents at 6.49 3/4.  Jul KC wheat down 25 1/2 cents at 5.85 1/4 & Dec down 23 3/4 cents at 6.04 3/4. Wheat closed lower today influenced by lower corn prices & favorable early harvest reports from southern Kansas.  Harvesters are facing another day of triple-digit temperatures in the southwest Plains, however, crop are in pretty good shape in Kansas, even despite bouts of subfreezing temperatures this year.  The drought monitor continues to show severe to an exceptional drought in Plains with little chance for rain in the 7 day forecast. US spring wheat areas are pretty similar. Demand is still lackluster for wheat, as today wheat exports were 287,100 mt, as Japan was the top buyer.