The strong selloff in the corn market this week has caused the spread between the July and September corn futures to jump to a new contract high. On Thursday, the July/Sept spread traded to an 85-cent spread between the two, eclipsing the high of 80 cents from February. The bull spread market could be tied to a couple different reasons. First, July futures is moving closer to “first notice day” on June 30, and long July positions need to be exited or risk delivery. This can bring more volatility into the market. The most likely reason for the move in the spread is the reflection of the futures market to the front-end cash market. Domestic basis levels for cash corn have been very friendly, with many areas holding a positive basis as end users are bidding up to secure corn supplies. This extremely strong cash market may be reflecting the tightness of the old crop corn supplies. The market is currently signaling that corn supplies are not available, and the basis and the spread are trying to pull bushels forward to fill needs. With the USDA reports next week, based on the cash market, the quarterly Grain Stocks report may be key as the market is trying to gauge available corn supplies. 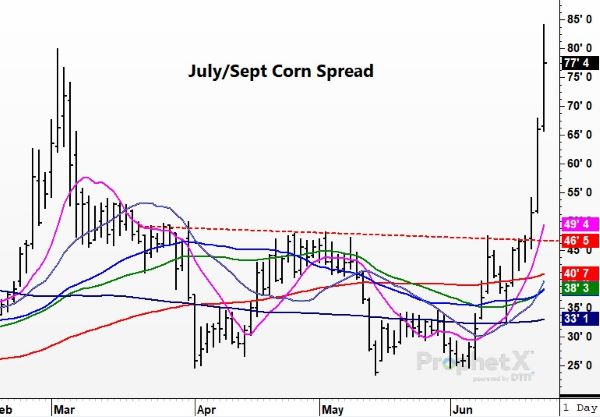 CORN HIGHLIGHTS: Corn futures plunged again as a broad-based sell-off in commodities continued again today. July corn lost 21-1/4, ending the session at 7.46-3/4. December dropped 38-1/4 to close at 6.55-1/2. Sharply lower soybeans (down near 60 cents) and wheat (down near 40 cents) weighed on corn futures as did a 8 to 14 day forecast which indicated more rain and no threatening heat. Heavy fund liquidation was noted today. Additional selling likely erupted when prices sliced through the 100-day moving average uncovering sell stop orders. Lastly, traders who are experiencing margin call likely were part of the selling mix today as they were exiting longs.

The sell-off in futures isn’t a surprise considering history suggests this is more common that not, especially from a higher price level. What is surprising is the extent to which prices have dropped in four sessions. Last week Friday, December corn futures peaked at 7.49-1/4 and today established a low of 6.45-1/2. This decline of 13.9% is steep for 4 days. A 25% loss in value from the winter/spring/summer high to fall low is more common in recent years than not. There are two observations here: one is that prices have more downside risk and two, it is early in the season with a crop that is considered late to sell off this much so soon. Nonetheless, it looks like money flow out of commodities and in particular row crops this week is dominating price direction. Ukraine almost seems forgotten this week, yet it looks like there is no viable resolution to move grain out of the country anytime soon. Stay with a defensive posture.

SOYBEAN HIGHLIGHTS: Soybean futures closed sharply lower after a day of heavy selling that affected the entire grain complex as recession fears grow. More moderate temperatures that have been forecast are also a bearish influence. Jul soybeans lost 59-1/2 cents, closing at 15.93-1/4, and Nov lost 61 cents at 14.15-1/2.

The entire soy complex was hit heavily today by funds liquidating some of their longs as worries about recession become more prominent and as weather forecasts ease on the extreme temperature predicted. As of noon, funds sold an estimated 10,000 bean and a combined 10,000 product contracts, and as of last Friday, funds were net long nearly 400,000 contracts. Crude oil fell around 2 dollars, pulling soybean oil down with it again, while the losses in palm oil began to ease. Prices in China have fallen with Thursday’s soy values down nearly 4%, and soybean meal futures fell 25 dollars per ton or 6% as China’s soymeal supplies are reported to have tripled in the past three months. China has been absent as a buyer in the US export market over the past few weeks. In Brazil, soybean production has increased by 2.3 mmt to 126.9 mmt according to Agroconsult. Both July and November soybeans have broken through key support at the 100-day moving average and may be subject to more fund liquidation. July soybean oil has also broken through support at the bottom of their Bollinger Band and are holding at 1.58 above its 200-day moving average. Soybeans are in over-sold territory but are unlikely to level out until fund selling cools off.

The grain complex took a beating today, and wheat was no exception. All three US classes finished sharply lower as did Paris milling wheat futures. Other than a somewhat improved weather forecast, we do not see much that has changed fundamentally from last week, but funds appear to be liquidating positions. Whether this is due to seasonal patterns, recession concerns, or something else entirely, the fact of the matter is that, when markets tip over, they often go hard and fast. Chicago and Kansas City wheat contracts (out to May of 2023) are now well below their 100-day moving averages. Both the RSI and stochastics also show downward momentum. Short term the technical picture does not look friendly, but long term we still believe that the market can recover due to globally tight supplies and the host of factors that helped to rally the market in the first place. Again, there is not much fresh news to report, but with the decline in prices world buyers are now making purchases; Algeria bought 600,000 mt and Tunisia bought 100,000 mt. Bangladesh, Saudi Arabia, Pakistan, and Iran are also tendering.

CATTLE HIGHLIGHTS: Live cattle futures stayed under pressure, despite the discount of the futures to the cash market, as recession concerns and consumer demand concerns have limited the market. Feeder cattle future were firmer, supported by a strong move lower in grain prices. Jun cattle slipped 0.875 to 135.250, and Aug cattle were 1.050 lower to 133.875. In feeders, Aug feeders were 1.700 higher to 174.850.

Outside market pressure, and a weak tone in the hog market spilled over into live cattle futures as prices stayed pressured for the second consecutive day. The USDA will release the June Cattle on Feed report on Friday after the market close, and expectations are for front-end cattle supplies to stay relatively heavy, with estimates to be 102% of last year. The heavier supplies may help keep the cash market in check. Light trade developed in parts of the South yesterday at $138, roughly steady to $2 lower than last week’s weighted averages. On Thursday, a light to moderate trade has developed in Nebraska and Iowa at mostly $234, $4 higher than last week, firming up on Wednesday’s sales. With the weakness, the June futures is running at a discount to the cash market with expiration right around the corner on June 30. At midday, beef carcass cutout values were softer with Choice values losing 1.79 to 264.78, and Select was 0.96 lower to 245.03. The load count was light at 52 loads. The weak grain market supported the feeder complex. The cash market in feeders has been supportive, and Feeder Cash Index values help supported the feeder market. The Feeder Cash Index was firmer, gaining 0.02 to 165.23. The cattle market will likely be looking to the June Cattle on Feed report to be released after the market close on Friday. After total cattle numbers, the placement totals will be closely watched. Expectations for the report are expecting to see placements at 100% and marketed 103% of last year. The placement numbers will be a gauge the cattle crop going into the end of the year and 2023. Negative tone in outside markets and the commodity sector in general have kept the cattle market in check. The discount of the futures market to the cash market is a unique twist going into June expiration.

LEAN HOG HIGHLIGHTS: Hog futures fell today despite both the cutout and cash being higher. Recession fears and technical resistance were behind today’s sell-off. Jul hogs lost 3.300 to 108.550, and Aug hogs lost 4.650 to 103.675.

Hogs were pushed lower today by recession fears that have pressured most commodities, a bounce off resistance at the 100-day moving average, and a lagging slaughter pace that may mean weaker demand. Cash was 3.46 higher, and the cutout was 0.09 higher at midday, but this provided no support as grain markets took a dive following heavy fund selling and brought hogs down for the ride. Technically, July bounced off it’s 100-day and as a result fell through its 50-day, triggering more selling. Support is about 4 dollars below current futures at the 200-day moving average. Lagging processing speeds have raised questions about the strength of consumer demand, and things will be unclear until the Hogs and Pigs report is released. Hog slaughter continues to run below a year ago while weights are higher which provides sufficient pork to meet demand. Demand should pick up going into July 4, which should provide some support.

DAIRY HIGHLIGHTS: Most Class III and IV contracts were moderately down at today’s close, a decent showing given the bloodbath that the grain markets and many other commodities faced. The spread on the second month futures has moved to more than a $2.00 premium for Class IV as the July Class III contract has tumbled $1.70 since its close on June 7. While spot cheese was unchanged for the second day in a row at $2.1350/lb, spot whey hit almost a six-month low at $0.47/lb. In the Class IV spot trade, spot butter was down a penny, while powder fell 1.50 cents.