The corn market has been exiting long positions, and a major factor in this move is likely tied directly to the weather. In mid-March, the USDA drought monitor maps were showing 36% of possible corn acres were experiencing some form of drought, and after the Planting Intentions report was released, the market was concerned for supplies of the next corn crop and added premium to the price. Moving forward, planting pace has improved, and weather forecasts have become more non-threatening. On this week’s report, corn acreage experiencing some form of drought has dropped to 19%. Forecasts for the near-term are staying friendly for development of this summer’s crop. Forecasts are calling for additional rainfall across some of those key area looking for precipitation. The market may be moving to aggressively take the weather premium out at this time, but at least in the near-term, the corn market is looking at a friendly start to the next corn crop. 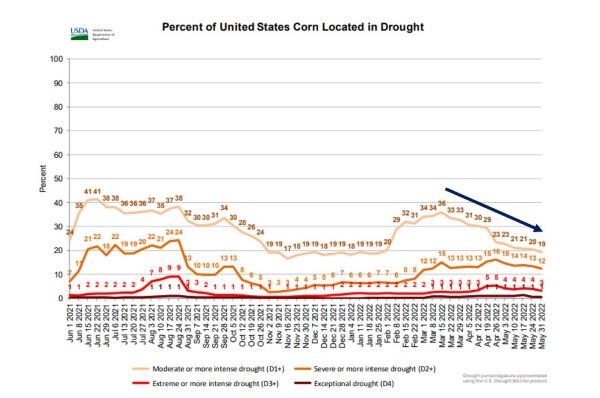 CORN HIGHLIGHTS: Corn futures slumped into the close after what might be termed a boring day as futures hovered near steady for most of the session. The inability to snap back at the end of the week after a hard drop on Tuesday and Wednesday may be telling. July futures lost 3-1/4 to close the session at 7.27 and December gave up 4-1/4 to end the week at 6.90, its lowest close since the first week of April. July corn lost 50-14 cents for the week while December gave up 40 cents.

The bulls are losing their grip with little news to provide support. More importantly, at least for now, the market is struggling with a 2.00 plus drop in wheat and long liquidation by managed money. Export sales were again disappointing at 7.3 mb old crop and 1/9 new. This brings the 2021/22 marketing year total to 2.332 mb or 93.28% of total expected sales of 2.5 bb. Argentina’s corn harvest is 32 % with crop rated 15% Good-to-Excellent vs 49% last year. A decision on Ukraine’s exports and USDA’s WASDE report next week will be key to prices as will future weather forecasts. Currently it looks like most of the Midwest will experience below normal temperatures and above normal precipitation according to the most recent 6-to10-day forecast.

SOYBEAN HIGHLIGHTS: Soybean futures closed lower today following disappointing export sales numbers and a test of resistance on the July chart yesterday. With front month prices so high, a pullback after some bearish news isn’t much to be concerned about. Jul soybeans lost 31-1/2 cents, closing at 16.97-3/4, and Nov lost 14-3/4 cents at 15.27.

Poor net export sales were the culprit of today’s lower trade at 4.1 million bushels for 21/22, a marketing year low and down 60% from the previous week and 77% from the prior 4-week average. Net export sales for 22/23 were 10.4 million bushels. Last week’s export shipments of 14.9 mb were below the 22.3 mb needed each week to achieve USDA’s export estimate of 2.140 bb in 21/22. Crude made new highs today which offered only a little support to July soybean oil, while the rest of the contracts and soybean meal closed lower. With Russia’s oil production expected to drop even more after Europe agreed on a partial ban, demand for bean oil should continue to rise. With prices so elevated it is not an unhealthy thing to see a correction following bearish news. July soybeans touched resistance at the top of the Bollinger Band yesterday but still closed safely above the 50-day moving average and maintain their uptrend. July lost 34-1/2 cents for the week but remain 51-1/2 cents below their all-time high.

Well, it was another poor day in the grain complex. All three US classes of wheat posted losses, as did Paris milling futures. Corn and soybeans finished lower too. The war continues to rage on in Ukraine with reports that Russia has gained much ground in the eastern part of the country. In terms of weather, North Dakota, Minnesota, and parts of Canada may get somewhat of a break from the wet conditions. The 7-day forecast for those areas remains mostly dry which may allow for planting of spring wheat to pick up. After that period though, there is concern about rains returning. In global news, Egypt and Algeria recently paid record high prices for wheat, despite the decline in US futures. And after their recent ban on exports, there is as much as 1.7 mmt of wheat sitting in vessels in India which has yet to be shipped. With incoming monsoon rains, quality will be a concern. In the southern hemisphere, Australia is almost finished with their wheat planting with a reported 14.5 million hectares – an all-time high. Delayed to today because of the shortened week, the USDA reported an increase of 26,000 bushels of wheat export sales for 21/22 and an increase of 13.4 mb for 22/23.

CATTLE HIGHLIGHTS: Front month live cattle had modest losses today, while deferred contracts gained. Feeder cattle closed higher with lower corn again, and perhaps anticipation that corn will continue to fall due to fund selling. Either way, the bottom is in for feeders while live cattle are pointing that way too. June cattle finished 0.025 lower to 133.600, and Dec live cattle were 0.325 higher to 146.225. In feeders, Aug gained 0.925 to 173.875.

Beef exports weren’t quite strong enough to provide much of a boost at 17,900 MT for 2022, down 11% from the previous week and down 17% from the prior 4-week average. The top 3 buyers were Japan at 6,000 MT, China at 4,800 MT, and South Korea at 2,700 MT. Cash traded at 135 for the week, with both northern dressed and southern live down 2 dollars from the previous week. Boxed beef was mixed today with choice down 0.77 and select up 0.72. The aggressive buying seen in feeder cattle this week may be pointing to a tight supply of calves which would impact cattle prices later this year. June live cattle gained 1.425 on the week, while August feeders gained an impressive 7.550. June live are less than a dollar away from a close above the 50-day moving average, and still have a gap on the chart to fill at 138.350, so if the trend continues next week that gap could get filled. August feeders had a consecutive day closing safely above the 50-day, with slight resistance at the top of the Bollinger Band at 175.029.

The July hog contract started the session strong but ran into resistance again at the 50-day moving average at $113.200. The July contract hasn’t traded over the 50-day since April 22, and this moving average has acted as a swing point in the market. Price slide back through the 100-day moving average but found support on the 10-day moving average. The weaker price action may pressure the hog market on Monday as hog futures have rallied over $12.000 off the recent low. The cash market has been supported under the hog futures. Midday direct trade was softer to end the week, losing 1.21 with the weighted average price at 112.64 on Friday, and the 5-day average moved higher to 112.50, showing the recent strength. The CME Lean Hog Index gained .12 to 105.03, and for the week, the index traded 0.63. The June contract will stay limited by its premium to the cash market, trading at $5.170 premium on Friday. Pork carcass values have been strong this week, and at midday on Friday, carcass values added another 3.38 to 115.40. Movement was good at 114 loads. Carcasses trading at $115.00, this is nearly $9.00 over last Friday’s trade. The USDA released weekly export sales numbers on Friday morning before the market open and posted new net sales of 31,900 MT for 2022 were down 13% from the previous week, but up 15% from the prior 4-week average. Mexico, China, and South Korea were the top buyers of US pork last week. The near-term low is in for the hog markets, the next question is going to be, how far can we rally? Resistance held prices in check into the end of the week, but the strong cash and retail tone can be enough to push price to another level.

DAIRY HIGHLIGHTS: While the July Class III contract was pretty quiet this week, settling down a couple pennies to start the new month, most deferred contracts closed with solid gains. The Q4 average added 23 cents to retest its recent high from mid-April, while the Q1 average rallied nearly 50 cents to push back near the $22.00 mark. Spot cheese dropped 3.00 cents this week with a close at 2.2275/lb, closing lower 8 of the last 11 sessions, after posting a new 2022 high on May 18th. Whey prices were able to post their first consecutive weekly gains since January, but Class III futures will likely find it hard to trade much higher if the block/barrel average cannot find some footing.