Copper prices continue to decline. Copper is often referred to as a leading economic indicator, as it has many multiple industrial uses. With both copper and now energy prices on the decline, commodity indexes are beginning to look weak — perhaps an indicator that high prices are curing high prices. 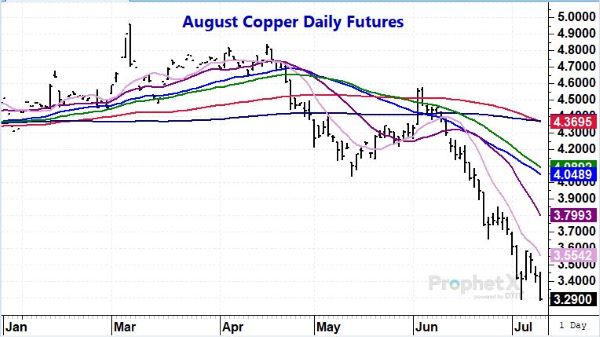 CORN HIGHLIGHTS: Corn futures had an awful day despite a mostly neutral WASDE report and forecast calling for the entire Midwest to experience below normal precipitation and above normal temperatures on both the 6-to-10-day forecast and 8-to-14-day forecast. July futures lost 48-1/2 cents to close at 7.32-3/4, and September gave up 43 to end the session at 5.94. December closed 42-1/2 lower at 5.86-1/2. Sharp losses in wheat, soybeans, and energies likely weighed on corn futures as well.

Today’s report left the yield at 177 bushels per acre and adjusted total production up slightly to 14.505 billion bushels. The average pre report estimate was 14.520 billion. Projected carryout rose slightly to 1.510 bb for the 2021/ 2022 season. The June figure was 1.485 billion. Carryout for the year ahead also increased to 1.470 bb from 1.40 bb in June. The average pre-report estimate was 1.433 billion. World carryout had slight increases and were termed neutral to slightly negative. We made the argument that the report would likely be old news quickly. We believe it was. However, futures were down hard, already more than 25 cents prior to the report release. Prices consolidated shortly after the report but then retreated to near daily lows. It looked as through bearish traders jumped on board rather quickly once prices failed to recover from morning losses.

Soybeans were driven lower following more moderate temperatures forecast over the next two weeks as well as slightly improved moisture. The Supply and Demand report today held no surprises, and perhaps trade was looking for more bullish numbers which caused the sell-off after its release. Planted acreage was adjusted to 88.3 million, and the national average yield was unchanged at 51.5 bpa. As a result, new-crop production is estimated at 4.505 bb. For 22/23, the USDA put ending stocks at 230 mb, down 50 mb from last month. The overall fundamental picture remains bullish, with soybean crop ratings falling another percentage point to 62% good-to-excellent, vs 64% expected and 63% last week. The USDA reported that 6% of the soy crop is setting pods, with 32% blooming compared to the 38% average. Crude oil fell again today as well as Indonesian palm oil on slowing exports, providing no support to soybean oil. Inflation fears are worrying the market about decreased demand, and tomorrow’s CPI data will point to how severe. November beans filled their chart gap two days ago and have now fallen back below the 200-day moving average. Commercials may step in as buyers tomorrow to take advantage of the lower prices.

It was another rough day in the commodity markets with harsh losses in all three US wheat classes and Paris milling futures as well. There is again talk that Turkey and Russia are discussing opening export corridors in Ukraine, which may have had wheat down this morning. But the main focus today was the USDA Supply and Demand report, which turned out to be fairly neutral. New crop ending stocks increased from 627 mb to 639 mb. All wheat production was pegged at 1.781 bb, a little higher than expected with an average pre-report estimate of 1.744. Despite this, prices ground lower into the close. Traders seems to still be concerned about recession, and money is flowing out of the market. CPI data tomorrow is also expected to show higher inflation year on year. There are also worries about China’s economy as well due to news of another round of covid lockdowns. The copper market is also at two-year lows and this market often serves as a barometer of the global economy.

CATTLE HIGHLIGHTS: Both live and feeder cattle closed higher today with feeders boosting fats thanks to a sharp sell-off in corn. Cash business hasn’t kicked off yet, but there were bids of 145 in parts of Nebraska. Aug Live cattle closed 0.525 higher to 136.675 and Oct gained 0.850 to 141.275. Feeders got a big boost from lower corn and Aug Feeders gained 4.700 to 179.575.

With cash trade not yet established for the week, the main mover in livestock today was lower corn, which sent feeders flying higher and brought live cattle a bit higher as well. Today’s WASDE report was also very supportive for both the immediate time and 23 market with beef production raised for the second half with lower expected carcass weights and lower third quarter slaughter is more than offset by higher fourth-quarter slaughter. Beef production grew by 15 million pounds from June’s report to total 27,922,00 pounds, and beef production in 23 is expected to be 25,940,000 pounds. Boxed beef was up 0.25 in choice and 1.15 in select with demand seeing stable interest. Tomorrow’s CPI data will be important, however, as rising inflation is prompting concerns over demand. Cash business should be established by tomorrow, which will give trade a clearer direction. August live cattle are nearing resistance at the top of their Bollinger Band, while August feeders blew past all resistance today for its highest close since the end of March.

Hogs benefitted from the gains in cattle today, as well as cash trade that increased by 5.19 to 122.44 at today’s close. The cutout was higher as well and showed a gain of 2.40 to 117.47 on the afternoon report. The higher cash and cutout this afternoon will likely be supportive to hog futures tomorrow, as demand seems to be picking up. Today’s WASDE report showed pork production lower on a slower than expected pace of slaughter for June and lower expected second-half carcass weights. Pork production in 2022 fell by 60 million pounds from June’s forecast to 27,159,000 pounds, but pork production for 2023 was raised by 155 million pounds from last month to 27,365,000 pounds. Pork imports in 2022 grew by 110 million pounds from a month ago and 2023 imports grew by 185 million pounds. Hogs are still mostly rangebound but at the higher end of their range. Tomorrow’s CPI data and trade reaction to such a large jump in cash should provide a clearer direction for the market.

DAIRY HIGHLIGHTS: Class III prices marched lower today with the August contract down 44 cents to $21.26, the lowest close for the second month contract since February 1. The July-December average basically matched its recent low posted last Wednesday with a finish at $21.88 as the retracement higher appears to have been short-lived. While Class III futures have been volatile in recent weeks, spot cheese has been pretty flat after falling more than 25 cents from mid-May to mid-June. Despite a strong export report last week, the fundamentals have progressed as such that a move back near $2.40/lb seems like a lofty goal, especially with the trend higher in the US dollar.