December cotton futures posted a bullish key reversal, potentially signaling a low could be in place. A daily bullish key reversal is when the trading range exceeds the previous day and closes higher. At the bottom of a trend, this can often be a signal the market is close to a low. After a sharp downturn, despite severe drought conditions and smaller crop expectation, the idea of value purchases looms large. Like many other markets that had a big decline in price the last couple of months, it appears cotton may be more representative of demand concerns, especially from importing countries. A strong day for stocks was viewed as supportive today and a potential vote of confidence that commodities, especially cotton is reaching a level where supply does matter, and value is in the favor of buyers. 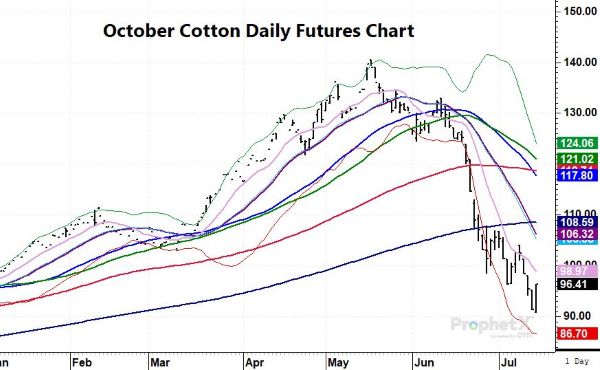 CORN HIGHLIGHTS: Corn futures ended the session mixed but down for the week. September corn lost 0-3/4 to close at 6.04-1/4, while December added 2-3/4 to end the day at 6.03-3/4. For the week, September lost 29 cents and December gave up 19-3/4, somewhat negating a positive hook reversal last week. A continued call for above normal temperatures and below normal precipitation is supporting prices. Sharply lower wheat prices and a firm dollar continue to act as anchors of price rally potential. Covid concerns in China are also problematic. Firmer energy and stock indexes may have also helped prices today.

Dropping basis on old crop, while still strongly positive, is likely reflective of end users moving to a just in time inventory approach. In other words, despite uncertainties with weather, the crop is coming along and the need to aggressively buy is not as urgent as it was when prices were in an uptrend. Additionally, the price collapse in the wheat market is also signaling there is not a rush to buy. Weather is critical in the next several weeks. Rains this week were beneficial to many but additional moisture will be needed, in particular areas that received only light or no coverage. Temperatures in parts of the western corn belt are expected to exceed triple digits over the next several days. We can’t help but believe that whatever crop was helped this week with rain may likely be negated by crop conditions next week due to a lack of rain.

SOYBEAN HIGHLIGHTS: Soybeans were mixed today with front months lower and deferred months slightly higher, as bearish news out of China did little to affect the commodity. Aug soybeans lost 5-3/4 cents, closing at 14.66 and Nov gained 1-1/4 cents at 13.42-1/4.

Soybean trade was quiet today following news out of China that their GDP numbers came out worse than expected, which could be counted as a win because soybeans are typically sensitive to Chinese news. The biggest bearish factor right now is with exports, as Thursday’s net sales cancellation of old-crop soybeans was the third consecutive week with a cancellation. Soybean shipments are also running below the USDA’s estimated export pace with only 7 weeks remaining for the 21/22 marketing year. Old crop beans in the US are expensive and China has stocked up well, so while they sell beans out of their current reserves, the hope is that they will ramp up purchases for the 22/23 year at these lower prices. The hot and dry forecast is mainly a threat to western crop areas, with the most critical month for soybeans being August. August soybeans closed lower on the week by 47-1/4 cents, and the contract is staying just above support at the 200-day moving average.

WHEAT HIGHLIGHTS: Wheat futures traded weaker in the morning session as follow through selling after four consecutive weak closes kept bears active where they added to shorts by the end of the day, dropping prices on all three exchanges by double digit losses. September Chicago dropped 18-1/4 cents to end the session at 7.76-3/6. This is the lowest close since early February. There are expectations of an agreement between Russia, Ukraine, Turkey, and the United Nations to open passages for wheat to move out of storage and to end buyers.

There are many who doubt there will be much progress, yet the market took a more defensive posture anticipating some progress is being made. Yet, 22% of Ukraine agriculture land is said to be held by Russia, further suggesting business is nowhere near normal. Harvested wheat is another logistical concern, in particular storage and movement. Harvest in the U.S. will continue to add some pressure on prices but not likely much. We believe the downtrend is more one of managed money that has sold and is able to sell more as their accounts likely have strong credit. The backdrop to this selling is likely a direct reflection and inverse relationship of sales as the U.S. dollar, which has rallied more than 6% in little over a month.

Live cattle closed lower as cash came in at 137 for the week, about steady with last week’s weighted averages, and northern dressed averaged 230, about 2 dollars lower than last week. Saturday’s slaughter is estimated at 54,000 head, bringing the weekly total to 677,000 head, 84,000 greater than the previous week. It was initially thought that feedlots would hold out for higher cash this week, but instead opted to get them moved rather than risk another period of hot weather that might limit weight gain. Weekly export sales were poor at only 9,200 mt, down 17% from the previous week and a marketing year low. Beef supply is expected to tighten however with the USDA estimating fourth quarter production down 345 million pounds, which would be the largest decline since 2008. Boxed beef had choice up 0.82 at 268.57 and select unchanged at 241.91.

Hogs traded quietly today as cash was 3.40 lower on the morning report, but the cutout continuing its trend higher by 4.50. August closed the chart gap below the market, eliminating that target which may provide more confidence to technical traders. Weekly export sales were poor at 18,300 mt, down 42% from the previous week. China’s report of worse than anticipated GDP numbers, along with fears of renewed Covid restrictions have caused concern as hog futures are sensitive to Chinese news. The concern over lower exports may be a trend for a time, which could back up supply into the domestic market. In that case, lower prices would be needed to stimulate demand. Bearish outside influences from bad CPI data and disappointing export sales put a wet blanket on the market the past few days, but hogs remain in an uptrend.

DAIRY HIGHLIGHTS: The August Class III milk contract fell $1.59 this week to close at $20.16, the worst-performing week for the rolling second month since November 2020. Spot cheese, which started its downtrend before Class III futures weakened, was not immune to the selling this week by falling 11.3750 cents to close at $2.0325/lb. It had become evident in recent months that the supply and demand equation for cheese was at a crossroads with bearish Cold Storage and Dairy Product Production reports fighting against bullish export demand, but the supply burden has begun to weigh on the market. The block/barrel average has been above $2.00/lb for nearly five months and will need to battle the negative momentum next week to keep that streak alive.