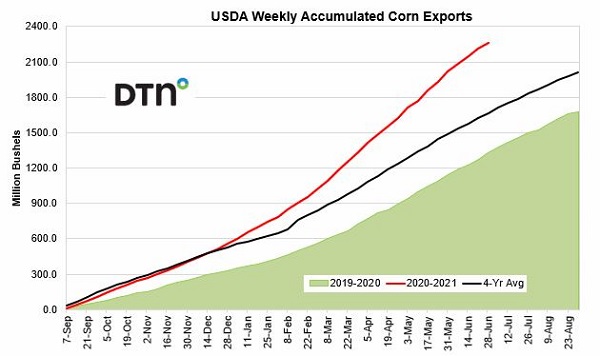 CORN HIGHLIGHTS: Corn futures firmed on the over-night trade by more than 8 cents in December, however, traders appeared content to sell the morning rally and head for the sidelines for a long weekend. July corn closed 22-1/2 lower at 6.97-1/4 while September lost 9-3/4 closing at 5.92 and December down 9-1/4 at 5.79-3/4. For the week December closed 60-1/2 cents firmer. A D.C. Circuit Court of Appeals today vacated a Trump-era rule that allowed for summer sales of gas with a higher ethanol blend which may have cast a negative tone on prices by mid-morning. Markets do not open until 8:30 am central on Tuesday, July 6. Conditions continue to become more critical for the northwestern regions of the Midwest as warm and dry remains in extended forecasts. This week’s acreage and stocks reports had a friendly tone as did frost concerns for the second corn crop in Brazil. A firmer dollar, poor exports, and favorable forecast for most of the Midwest was viewed as negative. The next USDA report will be July 12 estimating supply and demand. Overall crop ratings, at 64% good to excellent, are above the 2012 ratings for same week which were 48% good to excellent. Good stands and good crops in most of the Midwest should, if the forecast holds, continue to mature into the second week of July. Strive for a balanced approach between cash sales, hedges, puts and calls so that if the market is explosive to the upside you are mostly in an ownership position of if prices decline you have shifted risk.

SOYBEAN HIGHLIGHTS: Soybean futures gains of 2 to 5 cents after trading with double digit gains and losses. Futures clawed back late in the session as traders went long into the weekend anticipating little change to the forecast. The northwest regions of the Midwest remain with a below normal forecast for precipitation and above normal for temperature for the next couple of weeks. At only 60% good to excellent and temperatures potentially hitting over 100 degrees in the Dakotas it remains a challenge to expect the crop is doing anything but going downhill. Yet, most of the Midwest remains in generally good shape. The canola crop in Canada could be in jeopardy, supporting soybean oil July soybean futures closed 5 higher 14.51-3/4 and August 3-1/2 firmer at 14.33-1/4. New crop November gained 3-1/2 as well finishing the session and week at 13.99. For the week November gained a whopping 1.29-3/4. Soybean meal and oil also experienced strong gains as well finishing the week on a positive note. This afternoon’s 6-to-10-day forecast indicates the eastern half of the U.S. is cool and wet (above normal precipitation) while the west stays hot and dry. It could quickly turn into a crop with two end results. The question, is that good enough? Any other year we might say yes, we can’t draw that conclusion this year. Thin carryout figures suggest yield less then trendline (51 bu./acre) cuts too deep into carryout. We mentioned new crop prices have little or no weather premium priced in. We still feel that way this week despite a strong weekly price advance.

WHEAT HIGHLIGHTS:  Sept Chi down 12 3/4 cents at 6.52 3/4 & Dec down 12 1/4 cents at 6.61 1/2.  Sept KC wheat down 19 at 6.19 1/4 & Dec down 18 cents, closing at 6.30. Pretty standard market move today in wheat, similar to most of the week, wheat has been following whatever example corn has set and today was no exception. USDA’s 33.7 million acre planted estimate for winter wheat is up 11% from last year and harvest should’ve made progress this week and next week with a drier forecast on the horizon. However, while on the topic of weather, spring wheat crops in the northern Plains continue to suffer drastically due to extreme drought.  Eastern North Dakota and Minnesota have chances for moderate rain in the next seven days, but northwest Plains remain dry through next week.  Globally, wheat appears to be in good shape with impressive outlooks at the moment for European and Black Sea wheat areas, which is bearish for the US, especially when taking export sales into account.