With ongoing concerns of drought in the western half of the U.S., the cattle market is keeping a close eye on cow slaughter and cattle movement. As producers in these regions of the country are weighing feed issues and the quality of available pasture ground, beef cow slaughter has ramped up. At the end of quarter two this year, beef cow slaughter was at 891,300 head, or 17% over last year and 12% higher than 2019. The biggest jump came in the Texas, Oklahoma, New Mexico, Arkansas, and Louisiana region of the country, which has seen slaughter up 26% compared to 2019. Historically, cow slaughter pace is tracking close to 2011 as we move into the third quarter of the year. The tighter cattle numbers should start to be seen by the market as the calendar runs into the end of the year and 2022. This Friday, the USDA will release the next round of cattle on feed numbers, and the tighter overall supply could start to influence with lower placement numbers, reflecting an overall smaller amount of cattle on feed going forward. 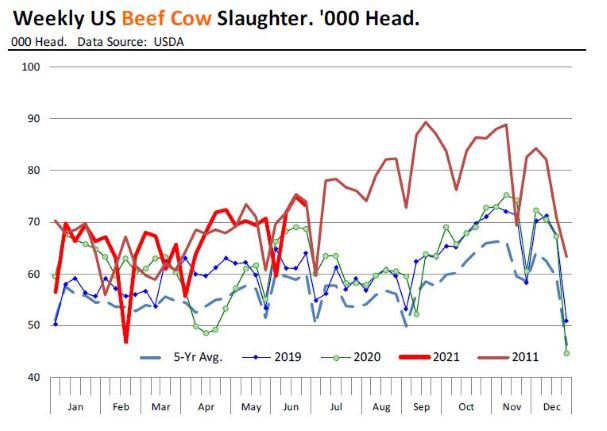 CORN HIGHLIGHTS: Corn futures closed steady in September at 5.71-3/4 and up 2-3/4 cents in December at 5.68-1/2. December 2022 closed at 5.01-1/2. Weather concerns continue to provide underlying support, as the northern Plains and western regions of the Midwest remained abnormally dry with the most recent 6-to-10-day forecast, again suggesting above normal temperatures and below normal precipitation. Moisture is critical and will continue to be in high demand in the days and weeks ahead. Elsewhere it appears that recent frosts in Brazil will again downgrade the crop and consequently could suggest more exports to the US. On the somewhat negative side, internal prices in China have been slipping, while the US dollar has been climbing. The dollar reached its highest level today since March, but as of this writing is posting a bearish key reversal. The current debate amongst analysts is whether the USDA yield at 179 bushels an acre is accurate. Some analysts believe the models the USDA is using in recent years is too aggressive on early season yield. Others will suggest that corn yield could easily top 180 bushels an acre as an average with normal weather. Less than ideal weather last August and again this year could be tempering the near-term trend. We mentioned December of 2022 in today’s quotes. We did that because if you have not started making sales, we argue to at least get one on the books. If 5.00 or better is the worst price you receive in your spectrum of sales, this is probably a good problem to have. The administration’s stance on ethanol is clear as mud.

SOYBEAN HIGHLIGHTS: Soybean futures ended mixed, with nearby August losing 4-1/4 to close at 14.39-1/4. November gained 1-1/4 to finish the session at 13.89-3/4. Argentina was noted selling five cargoes of soybeans to China. Soymeal prices should spur demand, as they are currently priced in futures near 370 per ton. This is 18% off the spring high. With dry weather a growing a concern for the western regions of the Midwest, tight supplies could become even tighter. Soybean oil recently challenged the contract high but since lost ground the last couple of sessions. Nonetheless, tight world inventory will continue to provide support. Until the weather forecast changes, or perhaps more importantly, better weather is experienced, it looks like the bean market is well supported at current price levels. Crop ratings continue to suggest a yield of 51 bushels an acre is not that likely, at least not when comparing to other years historically at this same time. We recognize that better seed quality and genetics may provide a more drought resistant plant, and if rain does occur sometime in late July and August, strong yield may still occur. That could also be grasping at straws in regions where plants are small, and temperatures are expected to hover near 100 degrees in the days ahead.

WHEAT HIGHLIGHTS: Sept Chi up 10 1/4 cents at 7.10 3/4 & Dec up 11 cents at 7.19 3/4. Sept KC wheat up 8 1/2 cents at 6.68 3/4 & Dec up 8 1/2 cents, closing at 6.79 3/4. MNPLS wheat took a break in its rally today on chances for rain in the extended forecast for spring wheat areas. However, hard to imagine that the minimal rain will help or even get the opportunity to; most of the moisture is likely to evaporate before the soil could even absorb it. Combined with triple digit temps and crop ratings this week of 11% of good/excellent, it’s hard to think this break in prices is anything but temporary. For the remaining parts of wheat country, there is little rain in the forecast overall, which should help winter wheat harvest pick up momentum this week. Globally, world wheat is expected to be a record high; however, there are new concerns about EU and Russian wheat not being as large as previously projected due to weather.