The money flow and funds liquidating their long position have been a big influence on the weakness in row crop markets. As of July 19, the most recent Commitment of Trader Report lowered the managed money long position in the corn market to 125,303 contracts combined between futures and options. This position was down another 25,871 contracts for the previous week’s report. Since the week of April 18 when the selling began in earnest, the funds have liquidated over 253,800 long contracts to reach the current position. This is the smallest net long position held in the corn market since October of 2020. The improvement in weather forecasts, potential for an agreement to try and resume exports of Ukrainian grain, and the exit of the inflation trade have been big factors for the movement out of the long side of the corn market. In the near-term, this path is likely to continue as corn market bulls are struggling to find information to encourage net buying. The selling pressure is evident in price, and December corn futures have dropped nearly $2.00 in value in that time frame. 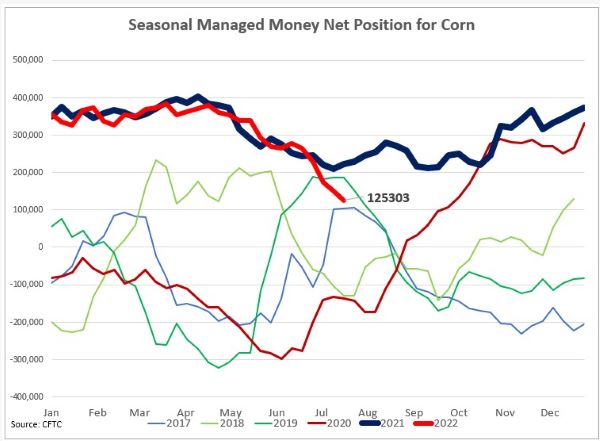 CORN HIGHLIGHTS: Corn futures were supported today from a warmer and drier outlook along with Russia bombing the port of Odessa after signing an agreement to allow for shipment of grain out of that region. It is unclear if there was port damage or damage to military ships in the area. Nonetheless, it does violate the spirit of the agreement and casts doubt on grain movement. September corn gained 15-3/4 to close at 5.80. December added 19-1/2 to end the session at 5.83-3/4.

Last week it was estimated funds reduced positions by nearly 27,000 contracts. Friday’s commitment of Traders report indicated funds net long 125,503 as of Tuesday. Considering they liquidated Tuesday through Friday, they may be under 100,000 a far cry from the near long 400,000 from earlier in the year. A rising dollar and lack of exports coupled with timely rains have led to the recent downturn in prices. It does, however go deeper than that. Since so many commodities lost such large value, the hard drop in price was more related to money flow. Repositioning by hedge fund managers of their portfolio mix likely started the harsh sell off in row crops in late June. Stock prices were said to have had their worst first half of year since 1070. This likely left their portfolios weighted too heavy to the commodity side. Today’s export inspection figure was less than stellar at 28 mb. This brings the year-to-date figure to 2.009 bb, or 80% of the yearly expected total sales of 2.5 bb.

SOYBEAN HIGHLIGHTS: Soybean futures rallied strongly, mainly due to a warm and dry pattern that looks to persist into August. Aug soybeans gained 38-1/2 cents to end the session at 14.73, and Nov was up 30-1/4 to 13.46.

The strong gains in soybeans come on the heels of an August forecast which remains mostly warm and dry for the Midwest, right when pods will be filling. Higher crude oil today was also supportive, as were higher corn and wheat futures. The crude market could provide long term support as well, with reports that OPEC production was up to 2.8 million barrels per day below target in June. Adding to support for the soy complex were small gains in palm oil. On the bearish side of things, there is still concern about China’s economy and commodity imports. Exports to China remain a big question mark, and if they are lower than expected, that could offset any rally caused by weather. Chinese Dalian soybeans remain expensive, around the equivalent of $18.76 per bushel. On that note, however, a US soybean crop one bushel below the USDA’s yield estimate could reduce supply by 150 mb – that is a big deal, and weather will be key going forward. In other news, export inspections for soybeans were pegged at 14.3 mb with total 21/22 inspections now at 1.947 bb.

Wheat was able to gain back some of Friday’s losses. The big news over the weekend was that Russia bombed Ukraine’s Odessa port (a major grain exporting area). Later reports, however, suggested that a warship was hit, and there was no damage to the port or grain elevators. This attack raises question as to whether Russia will uphold their end of the bargain (signed last week) and just how much Black Sea wheat will actually be exported. The deal that was reached is set to expire in three months. After recent large-scale selloff, funds are down to their lowest positions in Chi and KC wheat since 2015. Fundamentally, not much has changed as global supplies remain tight. In other news, the Wheat Quality Council’s spring wheat tour will kick off tomorrow. Expectations are to show HRS crops in good condition, though there is not much rain expected for the next couple weeks in the northern Plains. Export inspections data today was pegged at 17.5 mb with total 22/23 inspections now at 95 mb.

Friday’s friendly Cattle Inventory report gave some support to live cattle, while higher corn was supportive as well. Boxed beef was marked higher this morning with choice gaining 1.38 to 268.50 and select up 1.02 to 243.52. The Cattle Inventory report showed total inventory down 2% which was expected, but the surprise came from the Cattle on Feed report which had placements at 98% for June compared to the average trade estimate of 94.7%. If the packers continue to move cattle as quickly as they have been, the placements will soon be worked through, and lower supplies are still expected through the rest of this year and into next. Beef inventory for June showed a decline of 9.9 million pounds from the previous month, showing the strength of beef demand. Cash trade is not yet established, but last week’s averages were 136 in the South and 227 in the North. Last week’s negotiated cattle market was disappointing with only 69,000 head trading. With higher boxed beef the packers may be incentivized to pay up for cattle this week. October live cattle broke above their resistance at the top of the Bollinger Band and are entering overbought territory but may continue higher with higher cash and increasing cutouts.

LEAN HOG HIGHLIGHTS: Hog futures were subject to bear spreading today. August through December closed lower with the deferred contracts gaining on the day, as cash was lower but the cutout higher this morning. Aug lost 1.475 to 117.225 and Oct lost 2.200 to 94.125.

Front month hogs were lower today as the market traded this morning’s cash, which was lower by 6.23, and then down another 1.29 as of this afternoon’s report. This puts cash at 117.19, in line with August futures as they approach first notice day. October is currently trading at a 23-dollar discount to August, and if cash remains at these levels and the cutout continues its upward momentum, there is significant upside for both the October and December contracts. The cutout was up 1.85 as of this afternoon’s report, over 2 dollars above the 5-day moving average as demand for pork continues to increase. Weights are lower by 1 1/2 pounds compared to last week, and the average weight for the week ending 7/16 was 277.5 pounds compared to 278.1 the previous week. The packer will need to purchase hogs in greater number to make up for the weights which could push cash higher this week. August hogs met resistance at the top of their Bollinger Band today and came down only slightly. There are gaps lower on the August chart, but they may simply not get filled if cash stays firm and August goes off the board in line with the cash trade.

DAIRY HIGHLIGHTS: Coming into this week, milk futures were technically oversold as the market had been falling sharply for a few weeks now. Some Class III contracts are down $4 or $5 off of their highs, and technical indicators are in the oversold territory. With market conditions like this, it was expected that buyers would support the market at some point on any bullish news. Buyers found a reason to push the market higher today as the spot trade was stronger than its been lately. Blocks were bid up 4.50c to $1.9550/lb, while barrels added 1.75c to $1.9375/lb. Butter continues to hold in a range between $2.90 and $3.00/lb as it added 2.25c to $2.93/lb on Monday. The rally in Class III saw contracts up double digits with September leading the way, recovering 66c to $20.55.