The lean hog market has had a strong liquidation of the recent highs, and is now in consolidation mode.  The chart for August hogs is forming a potential “bearish pennant formation”, as prices have been range bound, consolidating, and tightening their trading range over recent sessions. This formation if completed, could lead to another break lower in the August contract.  The market will be closely watching the fundamentals, with the cash market and the demand for pork and carcass values for clues of a further move lower.  August is still supported at this time and has had the look of establishing a bottom, but any additional weakness, there is room for August hogs to narrow the gap to the fall months.  Regardless, this formation is concerning and producers may want to manage the risk of a potential break lower. 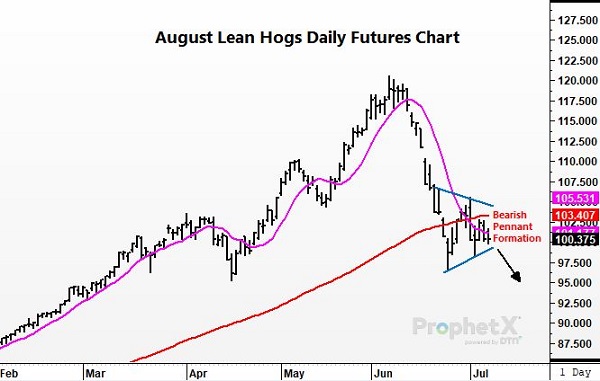 CORN HIGHLIGHTS: Corn futures traded firmer on the overnight session and yet again, early in the morning hours went into negative territory. A lack of new news and continued call for rains over the next several days has prices on the defensive. September futures closed down 6 cents at 5.36-3/4 and December down 7-1/4 at 5.23-3/4. Export sales, typically released on Thursday, will be released tomorrow due to the July 4 holiday Monday. A lack of new favorable news and chances of rain in the northwestern regions of the Midwest, coupled with a weak looking technical picture is, keeping prices on the defensive this week. Prices are where they were prior to the freeze damage in Brazil and favorable USDA reports. The implication is that the crop here in the US is getting better or there is other less than favorable news. It is more likely the idea the crop is stabilizing or improving. Or at least the perception of improvement is keeping the trade on the defensive. Given it is July 8, the market understands a couple of timely rains from this point onward for much of the Midwest would indicate increasing or maybe high odds of a big crop and little reason to expect end users to aggressively secure inventory. On the other hand, it is still considerably early in the entire growing and maturing season and the need for additional moisture, more so in the West, I would argue that prices are potentially finding support in a potential rally back toward highs. We have indicated before that carry out is much too small for anything less than close to trend line yield. Still, it is best to have a defensive approach in the first week of July so that if the forecasts are favorable for production, you are prepared if prices move lower.

SOYBEAN HIGHLIGHTS: Soybean futures closed lower in August, losing 1-1/2 cents to close at 13.65-1/4. November closed 7-3/4 cents weaker at 13.19-3/4 and down for the second day in a row. The low from Tuesday is holding, which is 13.00-1/2. Just like the corn market, a lack of news and favorable rain chances in drier regions of the US is keeping traders on the defensive. The decisive sell off on Tuesday, as well as increases in margin requirements, is likely keeping traders somewhat absent from the market. Volatility can provide opportunity, yet it can also be wicked as it can create large losses in a short period of time if on the wrong side of futures. We made the argument earlier in summer that high prices in the soybean complex have likely helped to cure high prices as demand has diminished both in exports and the crush pace. At near 13.00 November soybeans likely have some weather premium factored in yet probably not much in the big picture. Projected carryout remains very thin near 140 million bushels which again leaves no room for error in producing this year’s crop. We are a bit surprised at the current market weakness considering crop ratings only indicate 60% rated good to excellent. Nonetheless, markets tend to move on perception and the perception for soybeans is that if better weather as lack of new sales.

WHEAT HIGHLIGHTS:  Sept Chi down 4 1/2 cents at 6.18 & Dec down 3 3/4 cents at 6.26 3/4.  Sept KC wheat up 3 1/2 cent at 5.88 & Dec up 3 1/2 cent, closing at 5.99 1/4.  Wheat is still unable to close the gaps left behind in Tuesday’s trade as showers are moving through the Dakotas and Minnesota today.  However, based on the development of the crop being as advanced as it is and the forecast expected to turn hot and dry again next week, traders & producers alike wonder what, if any, improvement these rains can offer at this point.  US harvest for winter wheat should continue to progress, with minor delays due to areas that are receiving rains this week. Key producer Kansas should continue to progress with little to no issues. Winter wheat crops are in good shape globally, some parts of the EU could be getting too much rain while parts of Russia & Ukraine are trending toward drier warmer weather.  South American Ag agency CONAB, projects Brazil’s wheat crop will be 8.48 mmt compared to 6.24 mmt a year ago.