Crude oil futures continue to be either a bust or boom for commodity prices, and on Monday, crude oil was an anchor. September crude oil futures lost over 5% during the trading day as prices fell to challenge the bottom of the trading range. The strong push lower had ripple effects in the other markets as grains, cotton, and the rest of the energy sector saw risk-off trade to start the week. Recession fears and the prospects of limited demand were the main drivers of the selling pressure on the session. Adding in the geopolitical tensions and poor economic data in China and Europe, the market was in full recession protection mode. Supplies still stay limited for crude oil and other energy sources, but to start the week, the concerns regarding demand pressured the market. September futures look poised to challenge the recent contract lows near $90 per barrel, setting up a possible range with $100 on top and $90 at the bottom. 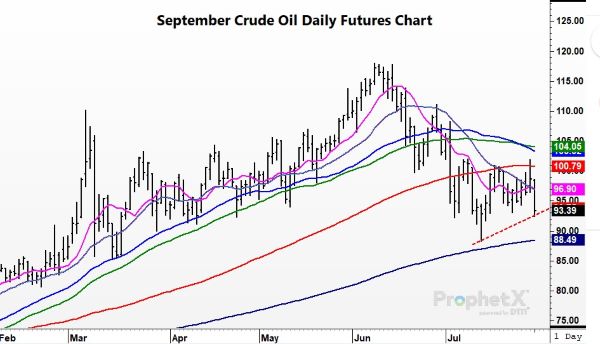 CORN HIGHLIGHTS: Corn futures closed lower for the first time six sessions, losing 9-1/2 in September and 10-1/4 in December. September finished the day at 6.07, rebounding off a low of 5.94, while December closed at 6.09-3/4, well of its low of the day at 5.97-1/4. Futures traded higher on the overnight session but by the early morning hours followed crude and soybeans lower. An early morning update to the European weather model offers more moderate temperatures and increased chances of rain.

Soybean futures are extremely volatile with futures gaining over 2.00 in recent sessions only to give back over 60 cents today. The bean market was a big anchor on corn prices. Yet the market will trade forecasts, and with volatility high, traders are quick to move out if necessary. The most recent National Weather Service 6 to 10 and 8-to-14-day forecast continues to suggest above normal temperatures and below normal precipitation for most all of the Midwest. With the crop approximately one week behind schedule both pollination and ear filling are at critical stages. we continue to struggle with the idea that the crop is likely getting smaller yet there doesn’t seem to be much of an appetite from private forecasters to reduce yield from 177. Highly rated crops, particularly in Iowa, Wisconsin and Illinois, may be keeping analyst at bay waiting for more information. Lastly, stress in the marketplace could be more on the political front, where rhetoric between China and the US regarding a potential visit to Taiwan by speaker Pelosi has many on edge. Traders may be inclined to either be short or move to the sidelines in this environment.

The entire soy complex was lower today as profit taking kicked in following last week’s weather rally. As weather worries dominated the trade last week, a possibility for better conditions drove the market lower today. The Eastern Corn Belt is now forecast to see more moderate temperatures and increased chances of rain, while the West is still forecast to be abnormally hot and dry. In addition to potentially better weather, Nancy Pelosi is reportedly going to visit Taiwan after all, inflaming tensions and spooking the market with the most harm done to the soy complex. Malaysian October palm oil fell 4.5% today as the country raised the amount of palm oil that exporters are allowed to sell. That, along with the decline in crude oil prices, dragged bean oil lower. Friday’s USDA report showed the crush premium in Illinois increasing from 2.43 to 3.70 a bushel, a large jump and a big incentive for processors to buy cash soybeans. Friday’s CFTC data showed that funds were still sellers with their net long position falling to 85,241 contracts, the smallest net long position this year. November soybeans fell sharply today but managed to stay above their 200-day moving average.

There are a few major things that the markets have been trading over the past few weeks, including weather, recession, and the Ukraine situation. And though less impactful to wheat, there have also been concerns about China and their import demand of grains. On that note, talks that Nancy Pelosi may visit Taiwan had the markets on edge today. Just a few days ago there were reports of China stating they would shoot down her plane if she made the trip (though there is conflicting information as to the validity of this or the source). In either case, it likely spooked traders today as any conflict with China could seriously alter trade relations with them. Also affecting the market is Ukraine – the first shipment took place out of Odessa for 26,000 tons of corn destined for Lebanon. Though not a huge amount, simply the perception that grain is starting to flow out of that region added to market pressure. The overarching theme of recession is also still out there and may have contributed to today’s weakness. Likely the most impactful item of note today, though, is the weather. The European model forecast is suggesting mostly normal temperatures and precipitation for the Midwest over the next two weeks. This may be in part what contributed to the selloff in soybeans today, which added to pressure in wheat. In other news, today’s data pegged wheat inspections at 9.4 mb with total inspections for 22/23 now at 105 mb.

Cattle futures continue to consolidate overall with the 100-day moving average supporting the market under the Oct futures, now holding this support level for the sixth consecutive day, leaving some optimism for a possible push higher. Cash trade was undeveloped, typical of Mondays. Most of the volume will hold off until later in the week, but prices have been trending softer the past couple of weeks, and the market will be watching to see if the trend continues. Retail values at midday were firmer, helping to support the market. Choice carcasses gained 1.26 to 270.50 and Select was 1.44 higher to 243.69 The load count was light at 39 midday loads. Feeder cattle saw follow-through buying on Friday’s firm close, as the grain market was strongly lower for Monday. After Friday’s reversal, feeder prices gapped higher to start the session. The Feeder Cattle Index stays firm, gaining 2.43 to 174.74 but still at a discount to the August futures. The direction of the grain markets will be a big influence on feeder prices throughout the week. The cattle market is still concerned about the overall economic situation and its impact on the consumer, despite the friendlier demand tone, could keep the upside limited. Prices have been mostly range bound the past couple of weeks, and it may take some fresh news to push prices out of this range.

LEAN HOG HIGHLIGHTS: Hog futures were mixed to start the week with light bear spreading pressuring the front end of the market. The firm cash and retail market helps support hogs in general. Aug hogs slipped 0.200 to 120.450, and Oct was 0.400 lower to 96.825.

The most actively traded October futures are still in an uptrend, but momentum may be slowing. Prices are still well supported, and if the cash and retail market stay strong, October will be poised to work higher. The strong cash market tone is the fuel in the market. Midday direct hogs on Monday were unreported due to confidentiality, but the 5-day rolling average trended higher to 124.44, slightly higher than Friday’s average. The Lean Hog Cash Index still trends higher and adding another 0.84 to 121.42, pulling the Aug contract higher. August expires on August 12 and is currently trading at a discount to the futures, which should stay supportive. The retail market is trading at its highest levels in a year. Prices were firm at midday with pork carcasses gaining 1.74 to 129.08. The load count was moderate at 175 loads. Estimated hog slaughter for the week is 2.291 million head, slightly above last week, but down 20,000 head from last year. Despite the lower numbers, hog weights have trended higher than last year, keeping production healthy, up slightly compared to last year. The cash market has been supportive and strong overall, leading futures higher. The consumer demand is still there, supporting the hog market as well.

DAIRY HIGHLIGHTS: The second month Class III chart has appeared to hold onto the $20.00 mark for support again as the markets trended higher at the end of last week and added to gains on Monday. This came despite another 2 cent loss in the block/barrel average in the spot trade as cheese is now at $1.86375/lb, an area that market has not seen since February. Class IV action was quiet, closing mixed to slightly higher. The roll this week from August to September as the second month will not be a big shift for Class III, but for Class IV the August contract closed at a $1.15 premium to the September today. This week entails a GDT Auction tomorrow and June dairy export numbers on Thursday.