The equity markets had a difficult start to the week as the Dow futures traded over 2% lower during the day. The beginning of this move may have been indicated last week, as the Dow futures failed to hold gains for the week, building a reversal on weekly charts, and seeing follow through selling to start the week. Last week’s push higher in prices early in the week ran into technical resistance near 34,000 points. The largest impacts on the markets to start the week come from additional economics concerns in China, as Chinese banks cut their prime lending rate on the overnight and are pushing additional currency into their economy to stimulate growth. Those economic concerns caused the U.S. Dollar index to push back toward recent highs. The combination brought the risk-off trade in equity markets as the fears of recession and global economic issues made trader cautious. Dow futures test support at the 100-week moving average near 33,000 points on Monday, additional selling pressure could easily have the market looking to test lower levels. 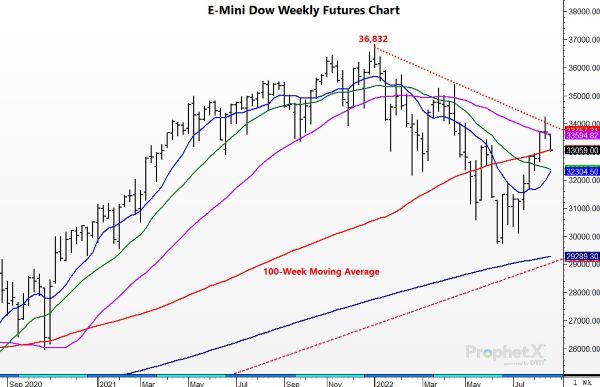 CORN HIGHLIGHTS: Corn futures closed with gains of 5 to 7-1/2 cents as early feedback from the Pro Farmer tour is slanted as friendly to price. However, a strong turn around in crude oil prices and sharp gains in the wheat and soybean markets likely had more to do with positive corn numbers. Expectations for this afternoon’s crop ratings may again show a slight decline and technical short covering were also features in today’s firm close. September ended the session at 6.33-1/2 up 7-1/2 and December gained 5-3/4 to end the session at 6.29, both reaching their highest close in 10 days.

Boots on the ground and farmers we have communicated with continue to suggest that a less than ideal spring would likely lead to less-than-ideal expectation for this year’s crop. It seems that is playing out. As farmers walk their fields and as analytical firms take survey through either satellite digital, boots on the ground, or phone reports to their advisors, what appears to be forming is that yield is probably somewhere south of 175.4 bushels an acre, the last USDA estimate. Forecasting is not an exact science and perhaps more of an art. If yield ends up better than current estimates, it would not be a surprise either, but it is seeming less likely as the summer wears on that will be the case. Keeping a lid on today’s price rally is another day of gains for the U.S. dollar, reaching its highest level in five weeks. Export inspections at just over 29 mb was termed neutral. The most recent 6-to-10-day outlook has most of the Midwest near normal in temperature and precipitation.

SOYBEAN HIGHLIGHTS: Soybean futures closed higher today, along with meal and bean oil. Very strong demand for cash soybeans fueled this rally, along with a national emergency issued in China due to extreme drought. Sep soybeans gained 38-1/4 cents to end the session at 15.27, and Nov gained 31-1/4 cents to 14.34-1/4.

Greatly improved crush margins drove the soy complex higher today with the most gains in the Sep soybean contract. Crush values continue to be a bullish factor for beans with crush values at near a 3-dollar per bushel premium to January futures, and meal basis still strong in Illinois at 90 cents over futures. Today, the USDA reported that crushing soybeans in Illinois could produce 20.78 of value, above the USDA’s estimated cost of soybeans by 5.74. The USDA also reported that 25.2 mb of beans were inspected for export last week, but is about 14 mb less than the amount needed each week to meet the goals by the end of this month. Soybean crop ratings were unchanged this week and remain at 58% good-to-excellent. China’s economic growth is lagging, and the country revealed yet another interest rate cut in order to boost the economy. While this news may seem bearish, the bigger factor is China’s intense drought and heatwave that has reduced their supply of energy and is likely harming their corn and soybean crop. Any damage done to Chinese corn and soybean production could cause imports from the US to increase and cause a significant decrease in the global carryout. Nov soybeans remain in their rangebound pattern, and the next area of resistance is at the 100-day moving average near 14.60. Sep meal is near its contract highs with resistance around 468.0.

Reports of more shelling near the Zaporizhzhia nuclear power plant over the weekend have tensions in that area on the rise, which may have contributed to stronger wheat prices today. If the plant loses power or is damaged, it could decimate agriculture in that region for years to come. So far, there have been a total of 27 ships having left Ukraine, though most of the grain has been corn, along with sunflower products. Ukraine’s grain association also decreased their estimate of the wheat crop to 19.0 mmt (down from 20.8 mmt). There were also unconfirmed rumors today that China purchased five cargoes of French wheat. China has been experiencing heat and drought in the central and southern regions and the Yangtze river’s water levels are low. This is causing issues in terms of shipping, hydropower production, and some companies have even been forced to suspend operations. This also raises questions about their wheat production, but excluding China, global wheat supplies are down to the lowest level in 15 years.

Friday’s Cattle on Feed report was negative according to expectations as total cattle on feed and placement numbers were above expectations.  Those report numbers pressured the open on the cattle markets to start the week.  Looking deeper into the numbers, the heavier placement totals were lighter weight cattle due to weather and pasture conditions, and the high price for feeder cattle have producers pull younger animals into the lots early.  The report keeps the longer-term view of the cattle market intact as supplies are still going to be tight.  In the fundamentals, cash trade was quiet to start the week, typical of Mondays.  Expectations are for cash trade to stay firm again this week, which should support the front of the market.  Cash trade will likely hold off towards the end of the week.  Retail values were firmer at midday, supporting the market as choice carcasses gained 1.90 to 266.18 and select was 2.39 higher to 240.33.  The load count was light at 37 midday loads. The USDA released Cold Storage report after the market close and total pounds of beef in freezers were down 1% from the previous month, but up 27% from last year. The tighter month over month supply is reflective of the demand tone in the beef market.  Feeder cattle were also mixed to slightly lower overall.  The cash market for feeder remains strong, supporting the market.  The Feeder Cattle Index was 1.80 higher to 180.66.  The strong tone in grain markets will likely limit feeder price action on Monday.  The cattle market looks supported by the fundamentals and the longer-term view still looks friendly as the market stayed supported through the Cattle on Feed report.  The market may still see some seasonal trade that could limit the near-term view, but the uptrend is still intact.

October hog futures held the 92.00 level, and Dec futures tested support at the 200-day moving average before buyers stepped back into the hog market to start the week.  The improved price action did have the market post a hook reversal, but the market will need follow through trade on Tuesday.  October was supported by the discount it carries to the cash market.  The cash trade was lower again, as midday direct cash trade was 4.66 higher to 121.01 and a 5-day rolling average of 123.84. The Lean Hog Cash Index was softer on the day, slipping .31 to 120.29, reflecting the softer cash tone last week. The index is still trading at a strong premium to the Oct futures, closing at 26.315 premium over the futures on the close. The retail market saw midday pork carcasses trading higher, gaining 3.86 to 121.01. The load count was moderate at 181 loads. The afternoon cash and retail close will help provide direction to the hog on Tuesday’s open. USDA released the August Cold Storage report and found frozen pork supplies were down 2% from the previous month, but up 20%from last year. Stocks of pork bellies were down 20% from last month but up 53% from last year.  The tighter month over month drawdown reflects the good product movement of pork from freezers. The hog market saw an aggressive pull back in prices last week, found some footing on Monday.  The cash market and retail markets will still be the key to turn prices higher as the hog market is searching to build a near-term low.

DAIRY HIGHLIGHTS: With the spot markets in powder and butter showing strength, both Class III and Class IV milk futures made gains prior to the 2 PM CST release of both Cold Storage and Milk Production reports. Cheese and whey were unchanged in the spot market. The technical resistance levels of $20 Class III and $23 Class IV continue to play out on the board. Tomorrow’s trade will be very interesting to watch play out, as cheese inventories were known to be large, but now have updated numbers showing supplies here in the US at all-time highs. Opposing the strong cheese supplies were butter supplies that were down over 20% YoY (July). The dairy herd is slightly smaller than this time last year, while overall milk production was marginally stronger.