Range and pasture conditions have been a big factor in beef cattle inventory this year, and overall conditions are historically poor. The southern region of the U.S. has been hardest hit with 84% of the area experiencing some form of drought. This has led to some of the worst pasture conditions in years. On the most recent crop ratings, 76% of the southern regions pastures were rated poor/very poor, well above last year and the 5 -year average. These difficult conditions have led to a large beef cow liquidation and early placements of cattle into feedlots as producers are lacking the resources to support cattle in that area. This was reflected in the latest Cattle On Feed report in which the 600 pounds and under category was the largest group of placements into feedlots last month. The strong pace of cattle slaughter will have impacts well beyond 2022. The expected calf crops in the future will show the overall lack of animals, which will support beef prices well into 2023. 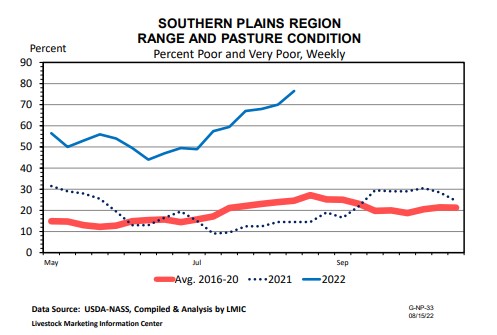 CORN HIGHLIGHTS: Corn futures firmed again today with sharply higher gains on the heels of supportive early numbers from the Pro Farmer Tour, short coverings, higher soybeans, and continued concern for China’s corn crop. Weekly crop ratings also fell again with 55% of the crop now rated at good to excellent, the fourth lowest rating in 20 years. The poor and very poor categories gained 2% and are now at 18%. Basically, one in every five fields is poor or very poor, not a likely recipe for 175.4 national yield. September gained 26-1/2 cents to close at 6.60 and December added 26-1/4 to end the session at 6.55-1/4, its highest close since June 29.

The crop tour is in its second day. We will publish results tomorrow and final numbers when available, likely on Thursday. The big highlights are South Dakota at 118.45, down from year ago at 151.45 and a three-year average at 161.59. Ohio was 174.17, down from 185.06 a year ago. The 3-year average for Ohio is 169.03. With the crop tour and USDA ratings each suggesting lower yield and some expectations that ear fill could be light due to deficits in moisture the market is factoring in a lower national yield. Be vigilant to check cash prices as harvest approaches. If the market is inverted or basis is strong, it might be advantageous to sell cash and look at paper ownership. Brazilian corn will more aggressively head to China. Demand needs to surface, especially from the export market to suggest buying on strength is a good long-term signal for both end user and speculator. More data will be available over the next few sessions. Stay tuned for that and how the market reacts. Today was impressive.

SOYBEAN HIGHLIGHTS: Soybean futures closed significantly higher for the second consecutive day, as good crush margins have made demand for cash beans extremely strong. A drop in crop ratings was supportive as well as purchases from China. Sep soybeans gained 39-3/4 cents to end the session at 15.66-3/4, and Nov gained 25-3/4 cents to 14.61.

The entire soy complex rallied again today. Crop ratings came out showing a decline in the crop’s good-to-excellent rating by another point to 57% vs 56% last year, with 13% of the crop rated poor to very poor. The USDA said that 84% of the crop was setting pods, slightly behind the five-year average. Crush margins remain strong and soymeal basis is very high at 50 over futures in central Illinois. Argentinian farmers have refused to sell their grain because of inflation, and as they are the number one soy meal exporter, this has been very supportive for US markets. China made a purchase of 4 mb of new crop beans today, and there are rumors that more purchases are planned. This comes as China experiences an intense heatwave and drought that has put the country on a national emergency. The drought may impact their soybean crop which would explain the recent surge in imports from the US as they worry about their own supply. If China’s soybean production is impacted, global supplies could get dangerously tight. Chinese soybeans and soymeal prices have hit their highest levels on the Dalian Exchange in two months. November soybeans finally closed above the 100-day moving average for the first time since June 21, and the next target higher is the gap at 15.30.

The grain markets showed some muscle today. Corn, soybeans, and wheat were up strongly, and though wheat did have double digit gains, it closed well off daily highs. As to why wheat faded back during the day, there is no one specific reason to point to, but profit taking is a likely culprit. But the strength shown overall likely comes down to a few important points of note. First, the market may be recognizing the drought conditions in Europe and China are perhaps more severe than some had anticipated. As we mentioned yesterday, the Yangtze river in China is critically low which is affecting their power production, business operations, and logistics. Additionally, Poyang Lake (China’s largest freshwater lake) has been reduced to a quarter of its normal size. There is talk that China may be looking for wheat from the US, Canada, and Australia. Weather has not only affected the northern hemisphere though; Brazil experienced a frost overnight which may have affected wheat in the southwest area of the country. To add to that, there is the possibility of another La Nina year which could result in a dry pattern for the South American summer.

The cattle market was looking for direction on Tuesday and found a little support from early cash sales. Light southern trade was triggered on Tuesday in the cash market at $142, which was steady with last week’s averages. Northern trade is remaining quiet as values are expected to be steady to higher in the north again this week. The August board has been tied to the southern cash trade and added some premium to pull in line with expiration at the end of the month. More cash trade will likely hold off towards the end of the week. Today’s slaughter totaled 126,000 head, even with last week, but 6,000 greater than a year ago. Retail values were mixed at midday as choice carcasses slipped .44 to 264.08 and select was 1.12 higher to 239.48. The load count was light at 94 midday loads. August feeders expire on the 25th and are tied to the cash market. The feeder cash index traded .06 lower to 180.60. The strong tone in grain markets pressured the feeder market on the day. The feeder market is looking to test lower support levels, but lower prices may be an opportunity to lock in supplies. The cattle market looks supported by the fundamentals and the longer-term view still looks friendly. A potential tighter grain supply could be a limit on near-term feeder prices. The market may still see some seasonal trade that could limit the near-term view, but the uptrend is still intact.

October hog futures traded with high volatility and nearly a $5.00 trading range as price challenged the $97.000 level early in the session, only to reverse lower as the sellers took over. The weak price action will likely lead the market lower to start the session tomorrow. The reversal from Friday is still in support of the market at 91.900, but that may be in jeopardy on Wednesday’s trade. The cash trade was quiet overall, as midday direct cash trade was 0.27 higher to 121.28 and a 5-day rolling average of 123.91. The Lean Hog Cash Index was softer on the day, slipping 0.31 to 119.98, reflecting the softer cash tone last week. The index is still trading at a strong premium to the Oct futures, closing at 27.08 premium over the futures on the close. The retail market saw midday pork carcasses tumble, dropping 11.14 to 106.47, The load count was strong at 232 loads. A large midday drop in pork belly prices helped fuel the drop in retail values. The hog market is volatile, which could be part of the bottoming process. Retail values will be closely watched on Wednesday’s trade to see if the weakness today gets corrected. The cash market and retail markets will still be the key to turn prices higher as the hog market is searching to build a near-term low.

DAIRY HIGHLIGHTS: Buyers were active today in milk as both classes closed with strong gains. September Class III futures finishes 24 cents higher at $20.20 as the teeter-tottering around $20.00 continues, but Q4 and most of the 2023 contracts closed 40 or more cents in the green. The second month Class IV contract managed to close back over the $24.00 mark while all Q4 contracts took advantage of expanded limits with finishes at or near $1.00 higher. While the spot trade for Class IV was supportive, that was not the case for Class III which likely garnered support from the sharp rally in Class IV and the feed markets.