Could crude oil prices be undervalued? U.S. strategic oil reserves are now at a 40-year low, as the U.S. government has been pushing supplies out of reserves onto the global market to help pressure oil prices. This tactic, plus more limited demand has helped drop oil prices well off their highs from June. The release from reserves is expected to end in October, which could tighten the market supply again. In addition, OPEC countries are contemplating a production cut on their output, which could quickly tighten the supply window, especially with winter in the northern Hemisphere around the corner and a potential for demand increase. The crude oil market held recent support levels last week and is starting to turn higher, which could be the beginning of a bigger trend. 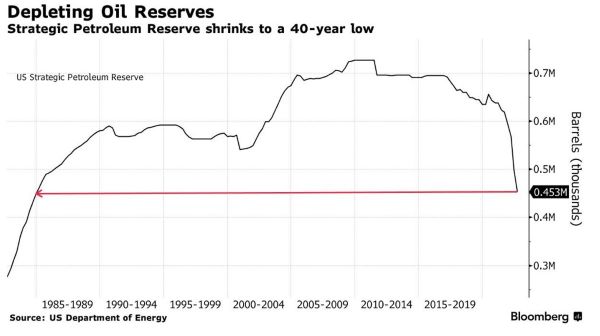 CORN HIGHLIGHTS: Corn futures firmed again on the overnight, retesting their high prices from yesterday but again faltered by mid-day finishing lower for the first time in six sessions. September lost 8-1/4 cents closing at 6.57. December gave up 7-1/4 to end the session at 6.50. A couple of bullish runs the last 24 hours have been met with selling, a sigh that this week’s Pro Farmer tour is likely priced into the market. While there didn’t seem to be much news on the negative front, there are days when prices slide as new bullish news (and buying) just isn’t there. Today may have been one of those days. September futures finished 16-3/4 cents and December 16-1/2 from today’s high price. Not an impressive close.

Tomorrow is the last trading day for September options, and while not always the case, futures seem to gravitate toward a strike price. First notice day for the September contract is at the end of the month. Export sales at 12.6 mb old crop and 6.1 mb new crop were not stellar. While seeing some uptick, end users still appear to be reluctant to buy in a bigger way, perhaps in part to the recent price recovery and the idea of paying for higher product in front of harvest is keeping them at bay. With harvest inching closer daily, the new trend for prices may be sideways but at a higher level than a month ago. We might argue the gain markets felt heavy today and the idea that December corn not able to reach 6.75 is suggesting a near term high might be in place. Sharp losses in soybeans and wheat futures as well as weaker crude oil may have had additional influences on corn futures and thus today’s poor finish.

SOYBEAN HIGHLIGHTS: Soybean futures closed lower again today with the brunt of losses in the deferred months as demand for cash beans is still strong. Recent rains and awaited pod count results from the crop tour have trade thinking yields may be higher than previously expected. Sep soybeans lost 8-1/4 cents to end the session at 15.52-1/2, and Nov lost 25-3/4 cents to 14.31-1/4.

In similar fashion to yesterday, soybeans started the day higher and faded into the close. Net export sales for soybeans were good with an increase of 18.5 mb for 21/22 and an increase of 172.4 mb for 22/23, mainly driven by a jump in Chinese purchases. Last week’s export shipments totaled 13.8 mb and were below the 43.9 mb needed each week to achieve the USDA’s export estimate of 2.160 bb for 21/22. The top purchasers for the 22/23 marketing year were China, followed by unknown destinations, and Mexico. China is rumored to continue their purchases as soybean futures on the Dalian Exchange hit a two-month high. The ProFarmer crop tour is finishing up and soybean yields have been extremely variable with some areas seeing good pod counts, and others with major issues. The recent rains have certainly helped but the USDA’s 51.9 bpa estimate is likely to fall some by the next report. September’s losses were limited as generous crush margins make demand for cash beans very strong. Crude oil was also lower today which had a part in bringing the soy complex lower. Nov beans were unable to hold their ground with another close above the 100-day moving average which appears to be a new resistance level. Prices have been rangebound with gaps both lower and higher that should eventually be filled. A continuation of soybean purchases from China could give buyers something to rally behind.

Today wheat gave back the gains from the past two days after fading lower into the close. All three US futures classes were down around 25 cents and Paris milling wheat futures also closed lower. Some weakness may stem from more chances for rain in the US southern plains. Spillover from lower corn and soybeans was not helpful either. In general, despite poor performance today, the global picture still looks supportive for wheat. China’s drought has been said to be the worst since 1960 and is impacting their rice and wheat cropland. There is talk that they are looking for US and Canadian wheat. In other global news, the Zaporizhzhia nuclear power plant has disconnected from Ukraine’s grid for the first time in its history due to nearby fires. We have previously mentioned the importance of this plant and how devastating it would be if there were a disaster there. The concern is that there could be leakage of radiation. News out of that region gets worse though with reports that a Russian attack killed 25 civilians on Ukraine’s Independence Day, further stoking the flames of the conflict.

A larger cattle supply and steady cash tone help bring some bear spreading into the live cattle markets as August nears expiration next week. Cash trade for this week has seen southern live deals marked at mostly $142, generally steady with last week’s averages. Dressed sales in Nebraska and Iowa have been at $232 to $233, about $1 to $2 lower than last week’s totals. The softer tone has pulled the front month futures lower to get in line with cash.  October futures are at a premium to the cash trade, leaving it vulnerable to selling pressure. Today’s estimated slaughter totaled 124,000 head, 2,000 less than a week ago, but 11,000 greater than last year. Retail values are trending lower on the week but found some buying support at midday as choice carcasses gained 1.26 to 264.09 and select was 0.86 higher to 238.48. The load count was light at 47 midday loads. The choice/select spread still reflects a current feedlot situation and good choice demand, trading at $25.61 at midday. The feeder cash index traded 0.50 higher to 181.00. A weaker price action in the corn market and the strong cash market supported the feeder market overall. The feeder market is testing lower support levels and reversed off early session lows, setting up a more positive technical picture. The cattle market looks supported by the fundamentals and the longer-term view still looks friendly, but the market may be seeing some seasonal weakness which could limit the near-term view, but the uptrend is still intact.

LEAN HOG HIGHLIGHTS: Lean hog futures are trying to forge a bottom as prices turned off session lows during the trading day on some short covering in an oversold market. Oct were 0.725 higher to 91.100, and Dec hogs gained 0.450 to 84.625.

Not big gains on Thursday, but at least the hog market is trying to find some footing. October has yet to fill the price gap from July 5 at 89.750, and that looks like a downside target, as well as near-term contract lows. The improved price action posted hook reversals on the daily charts, which could lead to additional buying support. This week’s strong selling pressure was triggered by a mid-week drop in retail values.  On Thursday, retail trade was higher at midday, gaining 2.71 to 105.70. Today’s midday load count was moderate at 123 loads. The retail market is looking at a shift in demand after the Labor Day holiday, and that seems to be pricing itself in. Weekly export sales were not officially released on Thursday morning due to technical issues from the USDA and will be updated when available. The cash trade tumbled as midday direct cash trade was 14.95 lower to 111.19 and a 5-day rolling average of 122.45. The Lean Hog Cash Index was softer on the day, dropping 1.18 to 118.00. The index is still trading at a strong premium to the Oct futures, closing at 26.900 premium over the futures on the close, but the question in the market is whether futures will meet cash or cash drop to meet futures. Estimated hog slaughter today was at 476,000 head, up 2,000 from last week and 3,000 from last year. The hog market is volatile, which could be part of the bottoming process, and the market is still in search of that low. The price action today may be a signal about building that low, but the weak cash market tone on Thursday is disappointing.

DAIRY HIGHLIGHTS: After a setback midweek, buyers entered the milk market again today. While action was just slightly higher for the nearby months, both classes saw double-digit closes in late 2022 and early 2023. Despite spot cheese trending lower this week, still feeling a hangover from Monday’s Cold Storage report, Class III futures are up through the four trading days so far. This would, however, make five weeks in a row where prices have moved off their weekly highs by the end of the trading day Friday. Class IV futures are a different story as the Q4 average is up nearly $1.50 this week, garnering enthusiasm from a solid showing in both spot products.