Declining Class III milk prices still look to be searching for a bottom. The September and most actively traded contract peaked just short of $25.00 on June 9 and has proceeded to drop nearly $6.00, challenging the $19.00 level. This week, prices have been trying to hold the $20.00 support level, but prices have broken through, opening further downside potential. The biggest weight on the dairy markets has been the drop in product values, namely cheese prices. Cheese values have plummeted from prices nearly $2.40/pound to nearly $1.75 on Friday’s trade. The concerns regarding demand and poor involvement from food service demand has helped build cheese stockpiles, pressuring prices. This week cheese values continued to trend lower, adding selling pressure to the milk market despite a seasonal window where milk production tightens. At this point, a low is not likely in for Class III milk, as $19.00 for September and lower looks like a potential target. 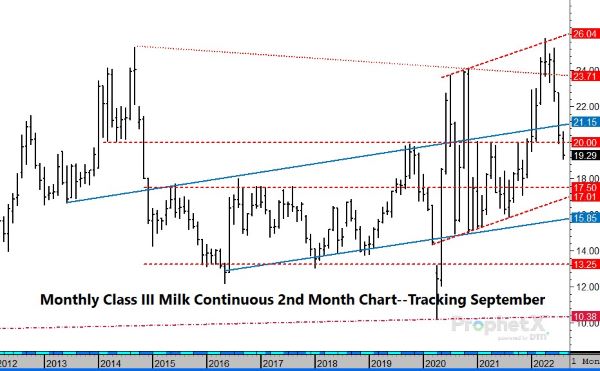 CORN HIGHLIGHTS: Corn futures gained a little ground today after a two-sided trade. New shipments out of Ukraine today likely prevented the corn market from rallying further. Sep gained 8 cents to close at 6.10-1/4, and Dec was up 3-3/4 cents to end the session at 6.10.

Corn traded both sides of neutral today but managed to hold onto small gains at the close. The bulls and bears appear to have been pitted against each other today. On one hand, three more vessels of Ukraine grain have been shipped out today (reportedly carrying corn). There are also reports of new, empty vessels coming in to be loaded, though they apparently don’t have insurance. These shipments are offering resistance to the market. Whether or not Ukraine’s exports will end up being significant remains to be seen, but the perception of grain flowing out adds to pressure. On the other hand, there are still weather and global supply concerns. France, for example, saw a record July drought, and other parts of Europe are dry as well. Here in the US, the eastern corn belt is expected to be mostly dry for about 2 weeks after Tuesday. The corn crop may be far enough along to avoid dramatic drops in production, but there are a few private yield estimates that are below the USDA’s 177 bpa. In other news, the Buenos Aires Grain Exchange reported Argentina’s corn harvest to be 81% complete. In southern Brazil there are rains which may slow their harvest, though no major issues are expected. As a reminder, next week will feature the August WASDE report (yield estimates won’t include field data until the September report). There could be changes to acreage for the Dakotas and Minnesota however.

With the exception of the September contract, soybeans posted losses today. Yesterday’s strong rally appeared to be tied to rumors of China making a purchase of US soybeans. Today that rumor was confirmed as the USDA reported sales of 132,000 mt of soybeans for delivery to China during the 22/23 marketing year. An equal amount was reported for delivery to unknown destinations during 22/23 as well. This all comes on the heels of Nancy Pelosi’s visit to Taiwan and concerns that the trip might affect US relations with China and their import demand of commodities. Ultimately this purchase by China may signify that they simply are in need of beans, and this would be supportive to prices. This leaves us somewhat scratching our heads as to why after such a strong rally yesterday, beans could not follow through today. Weather is also still a main factor affecting soybean prices; after some rains this weekend and early next week the forecast looks mostly dry. As pods fill in August, this weather will be critical, but so far most private yield estimates are in line with the USDA’s 51.5 bpa. In addition to weather, the US economy is still on the minds of traders as well as recession and inflation concerns have acted as a wet blanket over the markets recently. Next Friday’s WASDE report has the potential to be a market mover as well and we expect volatility to remain high next week.

The main headlines affecting wheat today were reports that three more vessels have left Ukraine ports. Though they are reportedly carrying corn and not wheat, the simple fact that ships are leaving is pressuring the market. Grain flowing out of that region will likely not meet some of the original estimates but with tight global supplies, every bushel adds up. Whether it is corn or wheat, adding it back to global supply acts as resistance to higher prices. Ukraine is said to have harvested 17.5 mmt of grain so far and 12.6 mmt of that is wheat. However, the fact of the matter is that Russia is continuing their assault every day and this puts exports at risk. New vessels that have been coming into those ports are reportedly doing so without insurance. Next Friday we will see if the USDA makes any changes for Ukraine on the WASDE report. Here in the US the forecast for the northwestern US plains remains mostly dry for the next seven days. While US spring wheat conditions look pretty good overall, other parts of the world are struggling. Argentina’s winter wheat is said to be only rated 17% good to excellent by the Buenos Aires Grain Exchange. All in all, global wheat supplies remain tight which should add underlying support to the market.

October cattle closed at their highest level since May, and the strong price action of the week will likely support the market to start next week. Cash trade helped trigger buying this week. Light southern live trade ranged mostly $135 to $136, which was steady to $1 higher than last week. In the north, dressed deals have been marked at mostly $225 to $227, steady to $2 higher. The tighter cattle supply and the search for quality has packers staying active in the cash market. Retail values at midday were softer as choice carcasses slipped 1.18 to 265.10 and select was 1.08 lower to 239.27. The load count was light at 65 midday loads. For the week, the Choice carcass values have trended softer, down just over $3.00 from last Friday’s close. The choice/select spread stays wide at a $25.83 difference between the two. This reflects the tightness of the beef lots and packers bidding up to find choice beef product to meet the demand. Feeder cattle added value to close the week despite a firmer tone in the grain markets. The Feeder Cattle Index jumped higher, gaining 1.68 to 175.73 and is still at a discount to the August futures. For the week, the cash index added 3.12 overall. The price moves in cattle this week reflect the support in the market given the tighter supply picture, stronger cash tone, and a firm retail demand. The market holding on to these gains into the weekend is a key. The technical picture looks supportive of higher prices, and the fundamentals are there as well as price are looking to trend higher.

LEAN HOG HIGHLIGHTS: Hog futures finished mixed with bull spreading in the front end of the hog market. The strong cash market and the premium of the August futures to the deferred supports the market. Front month August hogs stayed tied to the cash index with expiration around the corner on the 12th. Aug hogs gained 0.175 to 120.825, and Oct led the market higher gaining 0.800 to 98.400. For the week, August hogs were 0.175 higher, and October traded 1.175 higher.

The most actively traded October contract followed through on Thursday’s close, working higher to its highest close since March. The price action will be supportive into next week. The large spread between the August and October contracts finally saw some correction this week, but the spread is still wide at 22.475 on the close. August futures expire on the 12th, and October looks undervalued, given that spread. The strong cash market tone is the fuel in the market for the August contract. Midday direct hogs on Friday were softer, losing 3.37 to 123.67 and the 5-day rolling average at 125.7. The Lean Hog Cash Index was stronger on Friday gaining .67 to 121.61. For the week, the index traded 1.03 higher. With August expiration soon, the index is tied to the August futures. The retail market saw midday pork carcasses were softer, slipping 0.31 to 124.49. The load count was moderate at 153 loads. This week saw strong export sales and China business was active last week. The market will be watching closely to see if that is a trend or a onetime action. As China has pulled out their COVID lockdown issue in most areas, the need for pork globally may be increasing. Overall, it was a good week in the hog market with good price movement. This is supported by the cash tone and the retail demand. The hog market looks to stay supported in the near term.

DAIRY HIGHLIGHTS: Both Class III and IV milk second month futures contracts started the week higher but finished lower. Milk and cheese supplies seem to be abundant in many places with the only shortage in the market appearing to be butter, where the spot market has held over $3/lb. this week. The downward march of the GDT coming off historical highs continued. Some support to the dairy markets could come in the form of government buying and schools getting back in session. There were reports of the US government buying fluid milk for the 4th quarter for distribution through domestic feeding programs. Nearly 1.5 million gallons purchased already with more to come.