The improved weather in August was reflected on Friday’s USDA report, as U.S. corn yields were raised by 1%. On the September crop production report, the USDA raised the estimated corn yield for this fall to 176.3 bushel/acres, up 1.7 bushels from last month.  The largest factor was the improved weather across the Grain Belt, helped to stabilize the crop in some regions, and boost the yield forecasts.  Most noted was the jump in yield in the northern and western states.  Minnesota upped its yield forecast by 4.8%, Iowa was up 2.6%, Wisconsin up 3.0% and Michigan gained 3.0%, as beneficial rainfall worked across these parts of the Corn Belt during the month of August.  Even drought stricken North Dakota gained 1.9% on yield estimates as rains, though late for some regions, helped stabilize the crop in others.  Despite the jump in yield, and bushels gained in the production, corn prices fond buying support after the report was released.  The tone of the market has been very bearish recently, and the market was likely pricing in this adjustment in yield, so price rallied off session lows.  The key will be follow through trade next week, and the price action the goes with it. 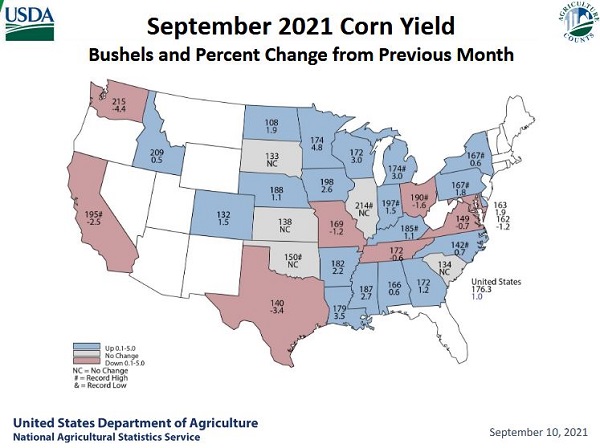 CORN HIGHLIGHTS: Corn futures ending quietly, but once again, lower. September lost 2-1/4 cents to end the session at 4.96 and December lost 0-1/4 cent to close at 5.10, after posting a low of 5.04-1/4, testing the 200-day moving average. A lack of positive news and sharp losses in wheat spilled into the corn market. Tomorrow, the USDA will release the Supply and Demand report for September. The average yield is expected to be 175.5 bushels an acre, a slight improvement from the Aug estimate of 174.6. Attention will focus on planted acres. Tomorrow’s report could show an increase in supply, beginning stocks and planted area. A social media post revealed FSA was scheduled to release its 2nd batch of certified acreage data Friday after USDA’s September crop reports, but the data appeared on the FSA site yesterday. As of Sep 1, FSA reported corn planted/failed acres at 91.2 million acres, up from 90.3 million acres reported in Aug. Basis bids for corn shipped by barge to the U.S. Gulf Coast did improve, though on Wednesday. Long liquidation can still drive prices lower, despite prices dipping into oversold territory. On the one hand, we were encouraged today that the 200-day moving average held, yet after trading higher, prices again failed into the close. Expectations for increased harvest pressure and continued fallout from hurricane Ida are still headline news.

SOYBEAN HIGHLIGHTS: Soybean futures posted an encouraging reversal, finishing with gains of 15 to 16-1/2 cents higher, as November lead today’s gains, closing at 12.86-1/4. It is difficult to argue that today wasn’t a positive sign considering carry out rose 30 million bushels to 185 mb, as adjustments to yield, up .6 bushels an acre to 50.6 and a reduction in the crush of 25 million bushels were viewed as negative. Nonetheless, it may have been old news since prices have been down over a dollar since the last USDA report. The pre-report average yield estimate was 50.5 bushels so today’s figure is considered old news. Harvested acres declined 300,000. Projected world carryout increase to 98.9 million metric tons and was above the average pre report is the mid of 96.9 and last month’s figure of 96.2. Today’s gains were encouraging yet November futures finished well off the daily high after peaking at 13.00. With harvest just around the corner it may be difficult to rally prices from here considering today’s report. The yield estimate is likely to change in the weeks and months ahead as feedback from farmers is measured. Yet, the end user response to today’s report may be to continue to buy as needed.

WHEAT HIGHLIGHTS:  Next Tuesday will be last trading date for both Chicago & KC September futures.  With that said, both contracts are trading on thin volume this week, with September Chicago down 6 1/2 cents closing at 6.75 and December down 3 3/4 cents closing at 6.88 1/2.  KC September lost 1/4 cent closing at 6.76 1/4 with a volume of only 28 contracts today, and December contracts lost 1/4 cent as well, closing at 6.82 1/2.  Today’s report confirmed what the trade had been fearing all week, hence the dramatic 37 cent sell of this week in Chicago futures. World wheat ending stocks, per the USDA report today, was raised from last month’s estimate of 279 to 283 mmt.  As expected, US ending stocks were lowered to 615 mb, which was slightly below the trade guess, so one could call that the “bullish” part of the report today.  Wheat tried to rally back from the red today and corn and soybeans retraced but ultimately closed in the red.  It was a little surprising to see the USDA leave Russian estimates at 72.5 mmt, when Russian ag agencies are currently projected 70 mmt and fearing dropping below even that estimate.  As expected Australia’s crop was raised 1.5 mmt to 31.5 mmt, Canada’s dropped another 1 mmt to 23 mmt, and China’s production was raised by 900,000 mt.  Upside to this week’s price action is it would be likely to see demand increase from here as we saw tenders for KC wheat this week to Nigeria.